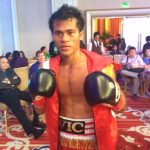 Philippine boxing, which has been on hold since the COVID-19 pandemic began in March, could return on September 26 with a matchup between two of the country’s top 105-pounders.

A fight between former WBO strawweight titleholder Vic Saludar (20-4, 11 knockouts) and Robert Paradero (18-0, 12 KOs) is being worked on for the Elorde Sports Center in Paranaque City, Philippines.

Promoter Gabriel “Bebot” Elorde Jr., who handles Paradero, tells The Ring that he is seeking to have the fight sanctioned for the WBA strawweight title, as he was told by the WBA that the “super” championship, which has been held by Knockout CP Freshmart since 2016, is vacant. He says contracts have already been sent to the WBA, and are awaiting their confirmation.

Julio Thyme, the WBA’s championships committee vice-chairman, told The Ring Wednesday that Freshmart is still their champion, and is expected to make a voluntary defense in October. Thyme did not respond when asked if the Saludar-Paradero fight would be considered for a secondary title like the “regular” belt instead.

Messages to Freshmart’s promoter Nuttadaj Vachirarattanawong and the Petchyindee Boxing Academy were not responded to.

Saludar, 29, of Polomolok, Philippines had previously held the WBO 105-pound title, defeating Ryuya Yamanaka in 2018 and making a defense in Japan before losing a decision to Wilfredo Mendez in August of 2019. He bounced back in December with a knockout of Mike Kinaadman, but had to get off the canvas against the sub-.500 fighter.

Paradero, 24, of Valencia City, Philippines is undefeated but untested, and has not yet fought in the National Capital Region of Metro Manila. He is rated no. 10 by the WBA, while Saludar is rated no. 7.

“This will be a good fight and I think it won’t go the distance,” said Elorde. “This will be battle of the little giants.”

“Both boxers will be prepared for this fight and both are hungry for [the] title,” said Kenneth Rontal, who promotes Saludar.

The Games and Amusements Board says it is awaiting approval of the safety measures from the Department of Health, but among the rules will be that fights have to take place in closed door venues without an audience in attendance.

The post Vic Saludar vs. Robert Paradero being eyed for Sept. 26 in Manila appeared first on The Ring.