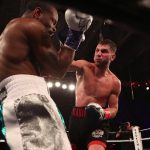 With the victory, Shishkin improves to 9-0 (6 knockouts).

The unbeaten fighter from Serpukhov, Russia was making his U.S. debut against Ware, a firefighter from Toledo, Ohio, who was coming off a career-best win over the previously unbeaten Ronald Ellis on Feb. 1.

After a slow opening round, Shishkin began letting his hands go in the second, mixing his attack to the head and body. Ware (13-2-2, 8 KOs) held his own, but the body punches began to take their toll.

Ware’s punch output had dropped significantly by the midway point and he was throwing just one punch at a time. Sensing his man was hurt, Shishkin unleashed a barrage of combinations that forced Ware to cover up or fight defensively off the ropes.

The end came in Round 8 when a combination hurt Ware against the ropes. A quick follow-up attack forced Ware’s corner to throw in the towel, prompting referee Gary Ritter to stop the fight at 2:40.

According to Sho Stats, Shishkin landed 74 body punches to Ware’s 29.

“I was surprised that Ware didn’t go down,” Shishkin said through an interpreter. “A couple times I stopped attacking because I thought he was going to go down, but he didn’t. He is a very tough fighter.”

The taller Ergashev (17-0, 15 KOs) rained punches down on the Ciudad Juarez, Mexico fighter from the opening bell. Ramirez was game but his head was repeatedly snapped back by crushing hooks and crosses.

Ramirez’s face looked bruised by the end of Round 3 and he had to deal with a cut across his nose. As he attempted to stand his ground in the fourth, Ergashev continued to tee off and referee Gerald Ritter stopped the fight at 2:00.

Khegai, who is ranked No. 5 by the WBO and No. 7 by the IBF, was the aggressor throughout, walking Tikhonov down and connecting with hooks and crosses. By the midway point, Tikhonov appeared to be in survival mode.

All three judges scored the bout 80-72 in favor of Khegai, who improves to 16-0-1 (10 KOs). The 27-year-old is originally from the Ukraine and now resides in Philadelphia.

Ennis scored a knockdown in the opening round and Mamani (23-6-1, 13 KOs) did not answer the bell for the second, choosing to remain on his stool.

Welterweight Brandun Lee (15-0, 13 KOs) knocked out journeyman Francisco Medel of Mexico in the opening round. The La Quinta, California resident dropped Medel (13-21, 8 KOs) twice before the fight was stopped at 0:31.