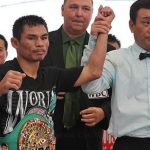 Wanheng Menayothin turned back the challenge of Tatsuya Fukuhara for a second time, winning a headbutt-shortened technical decision on Friday at City Hall in Chachoengsao, Thailand.

Just as in their first meeting, Menayothin used his right hand as his primary weapon against the Japanese southpaw, while Fukuhara had his best success while at distance. The two clashed heads frequently, with both sustaining cuts in the fight. The fight was stopped in round 8 when Menayothin was cut seriously by a head clash, compelling referee Bruce McTavish to send the fight to a technical decision