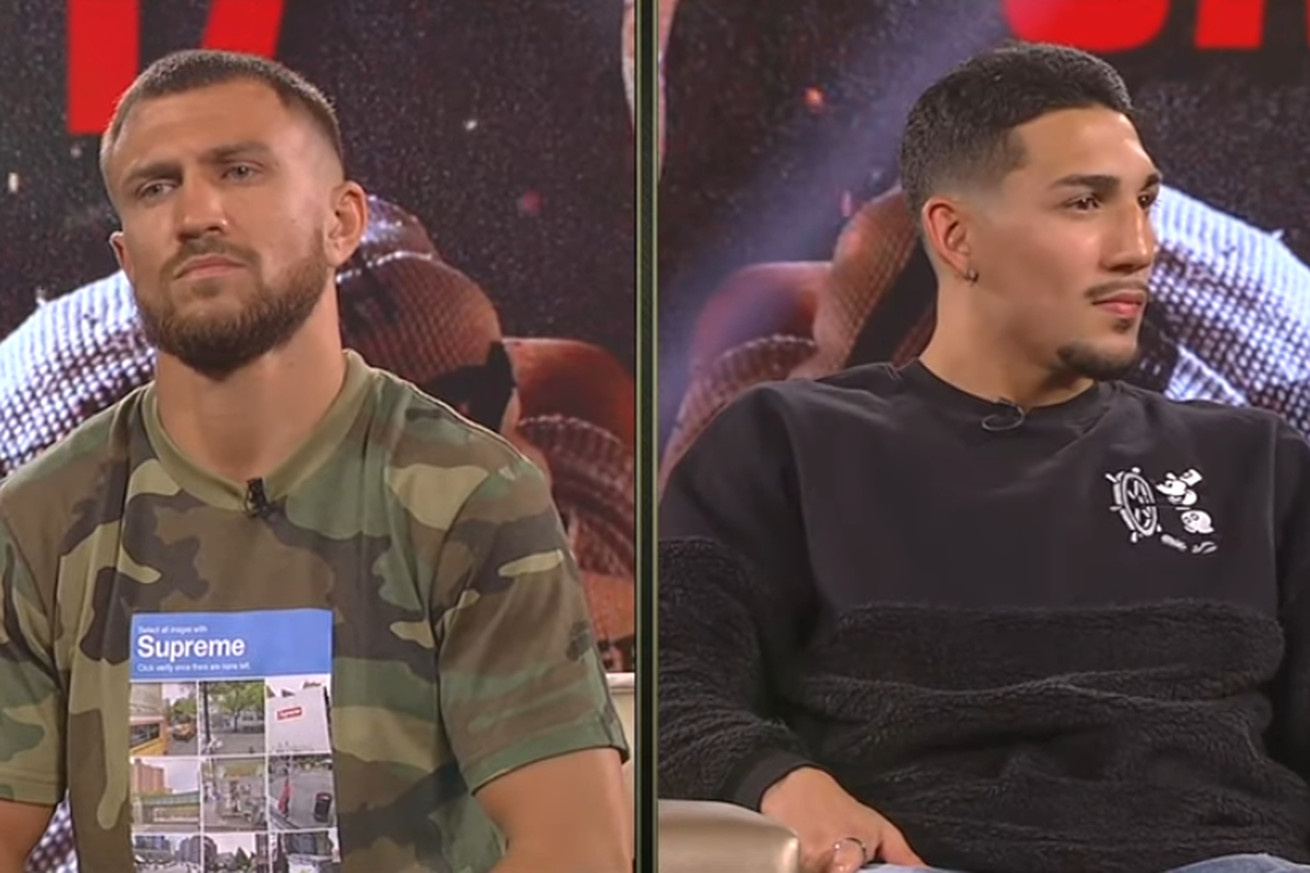 Lomachenko and Lopez didn’t get over the top at all, but the seriousness of Saturday’s event was fully on display.

You don’t have to wade too far into a hype package for Saturday’s huge fight between Vasiliy Lomachenko and Teofimo Lopez to find animosity from either man. With Lopez, it has often been boldly outspoken. With Lomachenko, it is largely in response, but there’s a cold seriousness to his replies, too.

Lopez has said many times he does not like Lomachenko. Lomachenko hasn’t said the same in so many words, but it doesn’t take much reading between the lines to get the sense that the feeling is mutual.

Wednesday’s special press conference was something of a disappointment if you were looking for theatrics or even any real trash talk. It was a calm Q&A session hosted by ESPN’s Joe Tessitore. But if you just wanted to see two guys who are very serious about what is a very serious fight, you certainly got that.

On the magnitude of this fight for fans: “It’s everything. It’s the best fighting the best, and that’s what it comes to. All the belts. Everything’s on the line in Vegas, just like everything else, all-in.”

On possible being the youngest fighter to win “four” belts: “That’s where ‘The Takeover’ comes in. That’s not just a phrase we throw out there. This is the part where I’m leading the new generation. Winning this is that stamp and that mark for the new era. That’s what it’s all about. I’m very happy about it.”

On having a long layoff: “I feel great, but for both of us, it’s the same thing. I’ve never had this long of a layoff. But I was still working out as much as possible. I’m a big 135-pounder, so I always stay in shape. I’m ready.”

On what he senses in Lomachenko: “When we, after everything, when we do our whole thing, the reason I say I look through him, you know why? It’s because in order to be the best, there’s so much more to this than that. All (the belts), I’m gonna collect. I worked my ass off for it.”

On what he may have seen in past Loma fights: “I don’t watch any of my opponents. I let my team work on that, and they pinpoint everything, then we work on it in the gym. Whatever he’s done in (a prior) fight, it’s gonna be different against me. I can’t reflect on who he fought, because they don’t fight like me. I’m not gonna get the same Loma that fought Linares or Pedraza. When we get in the ring, then I do what we’ve been working on.”

On why he doesn’t watch his own highlights: “Tunnel vision. I want more. The job’s not done. I don’t need to look at what I’ve done in the past. I’m looking ahead and looking forward.”

On Loma saying he landed a “lucky” punch against Commey: “I guess I’m gonna be landing a lot of lucky punches on Saturday.”

On his big knockout winning his first world title: “I’ve always had confidence. What it does, it puts that mark that I’m here. I talk a lot, of course, but I back it up each and every time, and I believe in my abilities. That all comes through having faith, man. I do what I do through faith. Landing that right hand, I’m ready for everything. I can hurt you with my right, I can hurt you with my left.”

On a perceived lack of big fight experience: “That’s what it takes to go from a good fighter to a great, all-time fighter. You gotta do things like this. We’ve spoken about this for a while now. Why am I gonna go back on my word? I talk the talk and I walk the walk. I believe that I can and I know I will become undisputed world champion.”

On his many viral videos and statements: “I’m an entertainer. Everybody’s getting this fight because I’m an entertainer. Many people look forward to seeing Teofimo, maybe it’s not just the knockouts, it’s the backflips, the celebrations. I’m just the type of person, it’s all about entertainment. I’m in the entertainment sport. What it comes to is, I like to show off.”

On any of the emotion spilling into the fight: “We can touch gloves. If he doesn’t wanna touch gloves, that’s on him. But I’m gonna go by the rules. We gotta touch gloves before we even get the bell. That’s how I look at it.”

On whether he can gain respect for Lomachenko: “Afterwards, it’s two guys thuggin’ it out to be great, to become undisputed world champion. May the best man win. That’s how I look at it. I came out here and I busted my butt to have this. It’s all about the glory. Whatever he does afterwards, it’s on him. Whatever I do, I have a goal and a vision for it.”

On off-setting Lomachenko’s foot work: “I’ve only been three or four years in the pros, so you guys haven’t really gotten to see all of me yet. I’ve only been able to give you guys what the (opponent) gives me. I have foot work, too. I’ve been a boxer. I am a boxer. … It’s so much more than just being a strong fighter and coming forward. It comes to the ring IQ. 18 years (boxing), I don’t look that bad.”

On his current relationship with his father/trainer: “I love that man to death. I’m always gonna back him up. We’re the dynamic duo. They want to air (past issues) out during fight week, but I’m zoning that out. I’ve talked to him, we’ve hugged it out. That’s what a father-son relationship is. I wouldn’t be here if it wasn’t for the person that pushed me to keep going, and I think (Vasiliy) could say the same thing with his father.”

On promising a knockout: “Tune in. You guys don’t want to miss it. Just enjoy the show. It’s ‘The Takeover’ against the ‘Hi-Tech.’ Two guys going at it. Anything can happen. One punch can change the fight, and one punch can end the fight. Tune in.”

On sharing a stage with Lomachenko for an hour: “I see — he knows it’s gonna be a fight. Whether it’s a chess match or not. He’s got the ring IQ, and I think he sees the ring IQ in me. We’re gonna display it, and I’m looking forward to it.”