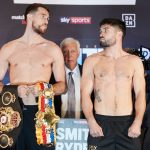 The homecoming is on.

Unbeaten British star Callum Smith and countryman John Ryder have weighed in officially for their super middleweight championship fight, which takes place at the M&S Bank Arena in Liverpool, England on Saturday.

Smith, The Ring Magazine champion and WBA titleholder, took his imposing 6-foot-3-inch frame down to 167.4 pounds and looked piping fit as always. This will be the Liverpool boxer-puncher’s second title defense, following on from a devastating third-round stoppage of Hassan N’Dam in June. A professional since November 2012, the Englishman has a record of 26-0 (19 knockouts).

Ryder, who also weighed in at 167.4 pounds, is the WBA mandatory challenger. Since moving up from 160 in 2017, the crafty southpaw has won five of six fights at the super middleweight limit, his lone setback coming against Rocky Fielding via disputed 12-round split decision. Ryder has a record of 28-4 (16 KOs).

The 29-year-old Smith, who incidentally scored a first-round stoppage over Fielding in November 2015, is a prohibitive favorite and will seek career-defining superfights against the likes of Canelo Alvarez and Gennady Golovkin should he prevail. 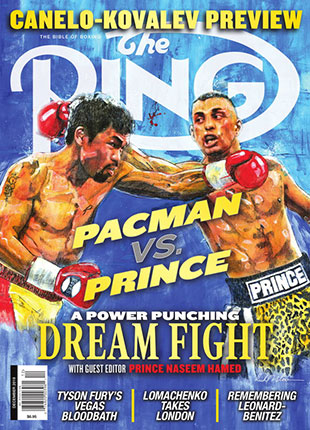