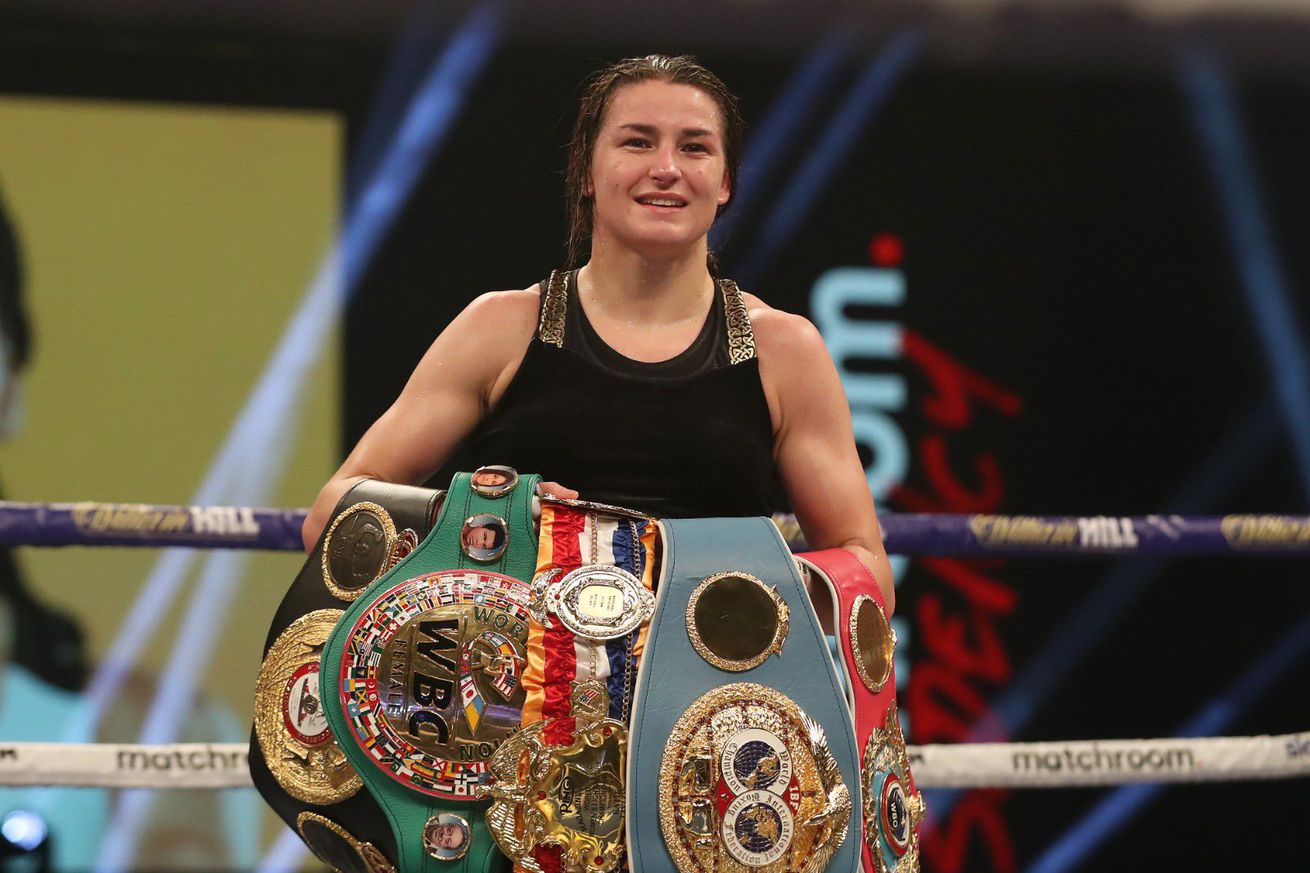 There are a lot of possible names for Katie Taylor to fight, but will she move up in weight again?

Katie Taylor ran her record to 17-0 (6 KO) as a pro on Saturday in London, dominating a game but over-matched Miriam Gutierrez to retain her undisputed lightweight crown in fine form, and potentially setting up a bigger money fight in 2021.

The Irish legend got through a defense she was expected to win, which kept her busy, as she prefers, and now looks forward, and so do we.

What’s next for Katie Taylor? We can break this down into two ideas, basically: whether she stays at lightweight or agrees to fight at 140 or a technically-welterweight catchweight.

If the 34-year-old Taylor wants to stay at 135, she can’t further unify or anything, obviously, as she holds all four major titles. She is the target in the division for everyone else, and there’s nobody at 135 where you go, “Katie needs to fight her.” That’s rare in boxing, but it’s the case Taylor has in this division.

But there are some interesting ideas. One if Amanda Serrano (38-1-1, 28 KO), the pound-for-pound Puerto Rican standout who has collected world titles across seven different weight classes. Accumulating titles like that of course means a lot of vacant belts and some that were never defended. But there’s no question that she’s a very talented fighter, a big hitter with a very high KO rate for women’s boxing.

There was, of course, a Taylor-Serrano deal in place for earlier this year, on a date that got scrapped by COVID. After that, it’d take a while to go over every claim so let’s not bother, but Taylor-Serrano didn’t come off on a new date. Instead, Taylor fought Delfine Persoon a second time in August, won more convincingly, and then moved on to Gutierrez.

Serrano, 32, hasn’t fought since January, when she tuned up on a Matchroom show in Miami to stay sharp for the Taylor fight everyone expected to come next. Taylor’s team (but not Taylor herself, as she just isn’t the type to make straight call-outs) called Serrano out specifically on Saturday. Will Serrano do a fight now? Hard to say. If the deal is too good to turn down, you’d have to think so, but there’s bad blood over the situation on both sides. Still, there’s been badder blood and fights still got done over the years. Money talks. Whether or not there’s enough right now is another story.

If not Serrano, there’s another name out there: Estelle Mossely. Mossely, seen fighting Taylor above at the 2015 European Games, has plenty of history with Katie. They had four major fights in the amateurs between 2013 and 2016, with Taylor winning the first three but Mossely beating Taylor by split decision in the semifinals of the 2016 World Championships.

Mossely won gold there, and won gold again at the 2016 Olympics in Rio de Janeiro, where Taylor was upset in the quarterfinal round by Finland’s Mira Potkonen. By 2016, Taylor was clearly beginning to fade in the amateur ranks. She’s done exceptionally well as a pro, obviously, and in part you may be able to thank frankly lesser competition in most of her pro bouts compared to fighting the top female amateurs of the time when she was wrapping up her amateur run.

Mossely, now 28, was sort of the woman who took her place as the top lightweight in the world then. As a pro, Mossely has gone 7-0 (1 KO) since turning pro in July 2018, fighting all of her fights at home in France. She has not made near the splash Taylor has in the paid ranks, and frankly her ambition hasn’t been near what we’ve seen from Taylor, either. She did win the lightly-regarded IBO title in 2019, and still holds it. She most recently fought on Sept. 25, returning in a non-title tune-up.

Taylor would surely be the favorite against Mossely, and pro boxing isn’t amateur boxing; Katie may simply be a better pro fighter than Estelle can be, her style more suited to it, and she’s for sure been in with better pros. But there’s some story there, some background that makes it a potentially compelling fight.

If Taylor wants to try her hand above 135 pounds, there are definitely options there, too. She’s fought once at 140, beating Christina Linardatou in Nov. 2019 to win the WBO title, but she’s gone back down quite happily. It wasn’t hyped as much because less people watched that fight than her first war with Persoon, and also it just wasn’t as good a fight, but Taylor didn’t have it easy with Linardatou, winning one card 6-4 and the other two 7-3. She won, but it was far from her best performance.

Taylor may not be terribly well-suited to fighting over 135. She’s expressed some hesitation about ever fighting at welterweight, saying she probably wouldn’t want to do something north of a 142-pound catchweight. She doesn’t walk around much heavier than her scale weight, she’s someone who stays about at fighting weight, sort of like Floyd Mayweather did in the latter part of his career at the very least. Mayweather didn’t put on weight between fights and was constantly at least lightly training to stay sharp. Taylor is much the same way.

But is it doable? Sure. 140 doesn’t have much by way of really interesting options, in all honesty, aside from one fighter we’ll get to in a special surprise third section. So what about welterweight?

The big fight there would be with the winner of the eventual rematch between Jessica McCaskill and Cecilia Braekhus. McCaskill (9-2, 3 KO) scored a tight, debated upset of Braekhus (36-1, 9 KO) on Aug. 15 in Tulsa, Okla., taking all four welterweight titles and becoming undisputed champion herself. That meant McCaskill gave up the two 140-pound titles she already held.

It was thought in the immediate aftermath that the 39-year-old “First Lady” Braekhus might retire, but she’s exercised the rematch clause, and it’s just a matter of getting a date and location for the bout. When that happens, the winner against Taylor would be a big fight. Taylor-Braekhus has a lot of marketability for women’s boxing, and while Taylor has beaten McCaskill already, back in 2017, it’s clear that McCaskill not only feels she’s gotten better since then, she really has gotten better since then. She’s 4-0 since moving up to 140 and then 147, and all of those wins have been against quality opponents.

Taylor-McCaskill 2 or Taylor-Braekhus at, say, 142 pounds, the undisputed lightweight champion against the undisputed welterweight champion? Yeah, easy sell. McCaskill could likely make the weight without trouble, and Braekhus has always been open to the idea of fighting Taylor. And Taylor could well change her mind about a 147-pound limit for the right fight, too.

Here’s one that could happen at 135 or 140: Chantelle Cameron, who after Taylor’s win over Gutierrez expressed that she definitely still has interest, and would even be willing to go back down to 135.

Cameron (13-0, 7 KO) is a 29-year-old British standout, won the vacant WBC 140-pound title in her last fight on Oct. 4, and she took that fight because she felt she simply was not going to get the fight with Katie Taylor. She may or may not have been right about that, but she set out to start building her own legacy, anyway, which is admirable.

Moving back to 135 probably wouldn’t be that hard. She’s fought her last two at 140, yes, but she weighed 137½ for her last outing and was very sharp. Taylor-Cameron could do strong business in the UK and Ireland. The two did meet in the amateurs, back in 2011, and Taylor won big, but that was a 24-year-old Taylor with a wealth of experience against a 20-year-old Cameron, who by comparison was a novice. By that point, Taylor had already been fighting and winning gold medals at high-level competitions for six years.

It’s a good fight to make, can be sold, but one wonders if Eddie Hearn wants to rush to make it. He mentioned it as a possibility Saturday, but he seemed more keen on Cameron first becoming undisputed at 140.