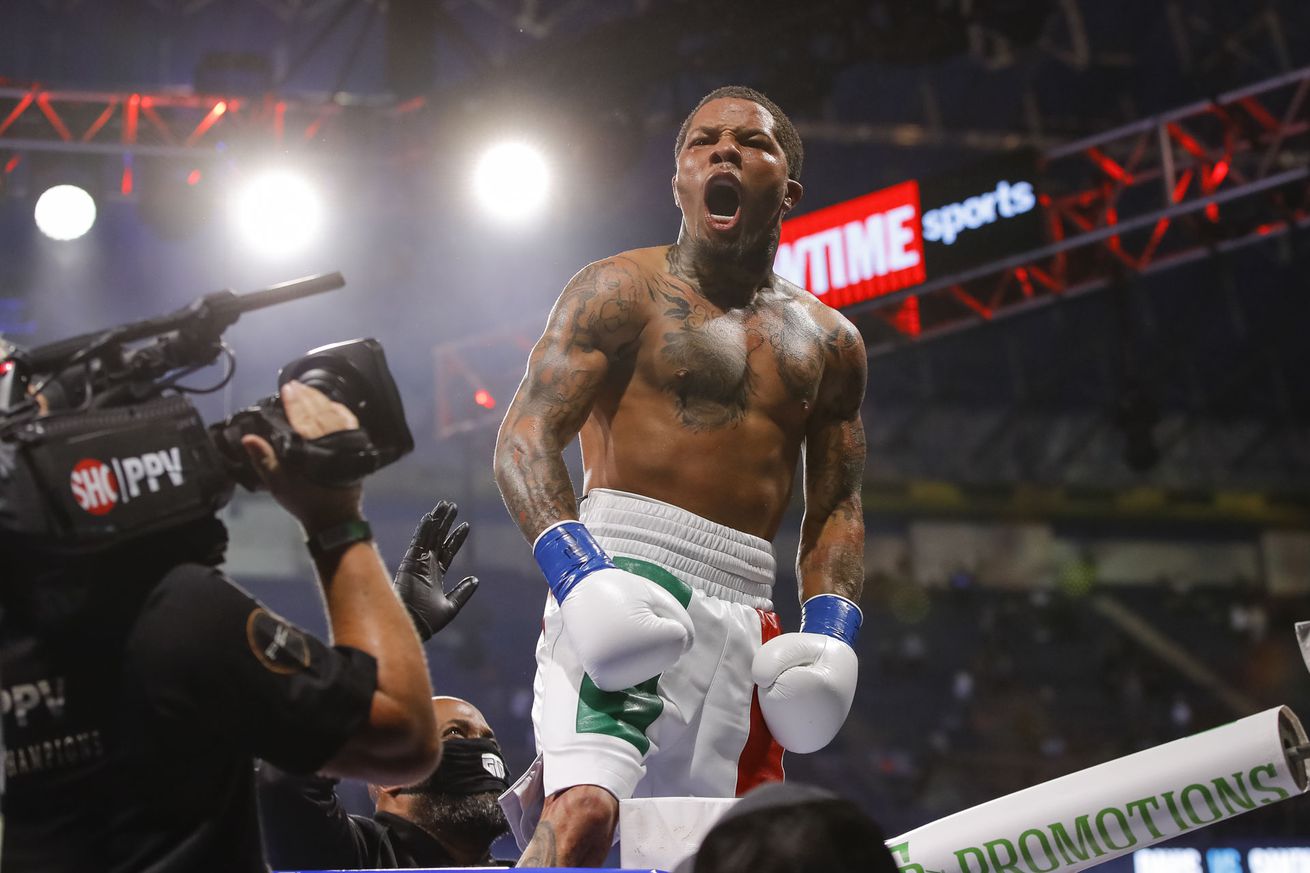 Gervonta “Tank” Davis should have lots of options, but what will he do?

With a monster knockout of Leo Santa Cruz on Saturday night, Gervonta “Tank” Davis went to 24-0 (23 KO), headlined a pay-per-view for the first time, and created some all-important buzz among boxing fans even the sports world in general.

DAZN, 8 pm ET), facing faded former featherweight titlist Yuriorkis Gamboa, the same Gamboa who lost to Davis at lightweight last December. Haney is expected to win convincingly, and timing-wise, you don’t get much better than having guys fight a week apart to set up a next fight.

Again, it would be a promotional roadblock, or at least could be. Haney is with Matchroom and DAZN, and DAZN see the 21-year-old as one of the guys to build the boxing brand around. Haney, in fact, brags about being the highest-paid lightweight titlist in the game right now. And he should, since he’s getting great money to fight on the streaming service.

But Davis is going to want to fight on pay-per-view from here on out, and DAZN don’t do PPV. That would mean Haney would have to go over, which might be doable, but “doable” and “would happen” are very different things. This one might be even more unlikely than Lopez, as Davis is also a big, big step up on paper compared to Haney’s opposition thus far, whereas Lopez is coming off of a fight with Vasiliy Lomachenko and has all the real confidence in the world.

Hey, it’s a possible 135-pound fight, and Garcia’s a name. Like Haney, Garcia (20-0, 17 KO) is someone DAZN see as a potential superstar for their service. In both cases, it’s easy to see why. They’re talented, young, American fighters, and Garcia in particular has sort of redefined how boxers can promote themselves, even beyond what promotional companies can do.

The 22-year-old Garcia is set to go on Dec. 5 against Luke Campbell, and beyond my “Garcia in 4” jokes (and the fact I do legitimately think he’ll win), that’s no gimme, that’s a step up for the kid. But Garcia said on Twitter he was rooting for Tank:

Gervonta let’s go, you got this ps I just want to fight you next so win! #DavisSantaCruz

And he also said the outcome, brutal knockout and all, definitely doesn’t dissuade him:

You’re outta your mind if you think that makes me waiver! It’s my turn next and then it’s on!!! LETS GOO

You have the same PBC/DAZN issue as with Haney. Again, great fight if you can make it.

This one won’t happen, but Davis is one of the young guys that kept being proposed, at least by fans and some media, as a possible Lomachenko (14-2, 10 KO). Davis also said post-fight on Saturday that he’s open to fighting at 130 or 135, wherever the best fight can be made.

Lomachenko’s loss to Lopez hurts, but it’s no reason to just start ignoring the 32-year-old Ukrainian. He’s still a top contender at 135 and would be at 130 if he moves back down in weight, which may be his best idea, and Tank has a legit title at 130 again. That said, it’s another Mayweather/PBC and Top Rank thing, another Showtime/FOX and ESPN thing, and on and on.

And even beyond that, Davis has less reason to fight Lomachenko than ever, as Loma is no longer the top dog, and he also doesn’t have great momentum, to say the least, after losing big to Lopez. Furthermore, if Lomachenko wants to chase a 130-pound title, Top Rank have great in-house options. They’ve got WBC titlist Miguel Berchelt, and Berchelt’s next opponent Oscar Valdez. They’ve also got WBO titlist Jamel Herring, and Herring’s next opponent Carl Frampton. Shakur Stevenson is at 130 now and wants the Herring-Frampton winner (actually, he wants Herring first, but he’s not getting him). And Lomachenko might want something of a tune-up/get-well fight next, anyway.

This might be the most likely of the name bigger name options. The 32-year-old Russell (31-1, 18 KO) has held the WBC featherweight title since 2015, and occasionally he even defends it. It’s clear every time Russell fights that he’s a hell of a good fighter, and we’d all like to see him more often. Even more than that, we’d often like to see him face bigger name, higher quality opponents opponents.

Russell has had quite a year, fighting in February, where he won a solid decision over Tugstogt Nyambayar, and since then he’s been a social media superstar, trashing every fighter he can think of for various reasons. The 126-pounder has called out Terence Crawford, a 147-pound titleholder, and I’m convinced he really meant it.

“Tank? Get the fuck outta here, shorty. I seen your little interview you did, you said somethin’ like, ‘Yeah, Gary too small, he’s this, he’s too small in structure’ — I will fuck you up,” Russell said in September.

Russell tried to call out Leo Santa Cruz — pretty aggressively, in fact — but didn’t get that fight. And he’s stated many times he is willing to go up in weight if he can get a money fight. He’s also said he’s a promotional free agent, though he’s only fought on PBC cards for years.

Of these listed names, Russell is almost certainly the easiest fight to make, unless he or Davis just don’t want to make the fight. And given the fiery nature that Russell has displayed this year, after years of being a pretty quiet dude, it’s probably easy enough to promote.

If I had to place a legitimate bet that I actually thought had the best hope of being right, and the options were Lopez, Haney, Garcia, Lomachenko, and Russell, I’d bet on Russell without a second thought.

You could certainly consider whether Davis might not face any of these guys, and instead take on some lesser name, and there are plenty out there.

22-year-old Dominican lightweight Michel Rivera (19-0, 12 KO) won off-TV on the Davis-Santa Cruz undercard in Texas on Saturday. Chris Colbert (14-0, 5 KO) is facing Jaime Arboleda (16-1, 13 KO) in an interim WBA 130-pound title fight (yes, despite having “super world” and “world” champions in Davis and Rene Alvarado, the WBA need an interim title fight) on Nov. 28 on Showtime. And there are a lot more guys in the world between 126 and 135 who would probably jump at a chance to fight Tank, just for the opportunity.

But Davis has now gone to pay-per-view, and if the fight did even reasonably well compared to expectations (nobody thought this was going to be some gangbusters blockbuster hit), it’ll be really hard to pull him back from pay-per-view and onto regular Showtime. And to sell a pay-per-view without being a mega-super-duperstar, you need a good dance partner. Rivera, Colbert, or Arboleda ain’t that guy, and won’t be soon. Russell? Again, wouldn’t be a humongous show, but a solid, credible dance partner if you have a decent projection for what Tank can expect to do going forward.