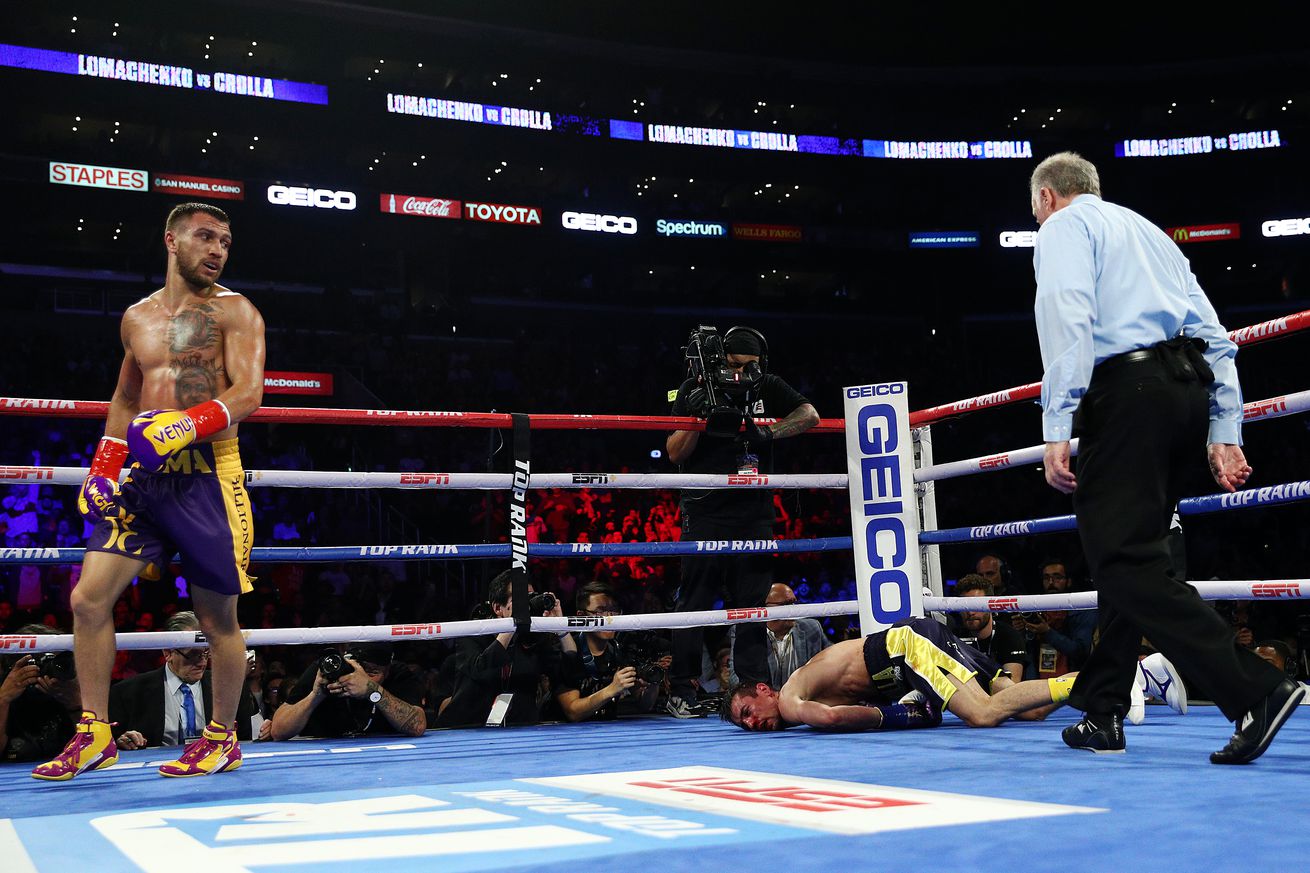 Vasiliy Lomachenko easily beat Anthony Crolla, and now we look ahead at what could be next for the lightweight star.

Vasiliy Lomachenko took care of his WBA mandatory on Friday night, smashing overmatched Anthony Crolla and knocking him out early in the fourth round.

So what’s next for Lomachenko?

Asked directly after the fight by Top Rank interviewer Crystina Poncher, Lomachenko (13-1, 10 KO) said he wants Mikey Garcia, but there are multiple potential problems with that idea.

First off, Garcia (39-1, 30 KO) is a PBC fighter. I’m putting that first because if everything else weren’t an issue, this still would be. Garcia being linked with PBC and Lomachenko with Top Rank/ESPN makes any deal tough, because those two sides would actually have to agree to do it, who gets to air it in this content-crazy environment, and everything else that goes into doing a deal.

Garcia spoke about the falling out with Top Rank back in 2016 when he was free and preparing for his return to action. The good news is, he said — then, at least — that he would be willing to work with Top Rank again.

“I know at the end of the day if they need me or I need them, it’s all business,” Garcia said at the time. “I honestly believe Bob [Arum] didn’t know all the details regarding my case and my situation. A lot of it was misinformed, maybe, or misinterpreted by both parties. It’s just business.”

On the other side, Arum was asked about Garcia earlier this week, and he didn’t sound particularly excited about the idea after Garcia’s March 16 loss at welterweight to Errol Spence Jr.

“If Garcia is gonna go down to 135 and realize that his marketability has been affected by the poor performance against Spence — I know Spence was the bigger guy, but you don’t go in and take people’s money and don’t try to win. He didn’t try to win that fight, he tried to survive,” Arum said.

We pick at lots of things Arum says, because lots of things he says are very pick-at-able, but fundamentally what he’s saying is true: Garcia’s reputation took a hit against Spence, and he’s got the stink of bad pay-per-view on him right now.

And, as he touched on a bit there, Garcia moving back down to 135 after fighting at 147 really isn’t wise right away, and perhaps not even doable, which Arum went into more at last night’s post-fight press conference.

“You have to understand, the man just went up to 147 pounds. Loma, myself, understand boxing,” Arum said. “If you go up and you fight at 147 pounds, it is extraordinarily difficult to come down to 135 pounds.

“That’s not to say it’s not possible. So it’s up to Mikey. Can Mikey come down to 135 pounds, defend his title against Loma’s two titles? That’s up to Mikey. I can’t talk to him. All I know is from my experience that it is a very difficult thing to do. That’s all I can say.”

Plus, even if he could comfortably get back down right away, would Mikey want to go right back into the fire against another elite opponent? The WBC is giving Garcia time to decide if he wants to keep the 135-pound belt he has, but there’s a good chance he returns at 140, vacating that title.

If that’s what Garcia does, then Luke Campbell (20-2, 16 KO) is in line to fight for the vacant belt as the WBC mandatory challenger. Eventually, if Campbell were to win the belt, he’d be a Lomachenko target. Campbell is promoted by Eddie Hearn and thus with DAZN, but Hearn has shown a willingness — as he did with Crolla last week and with Amir Khan next week — to let his fighters take the biggest fights they can get off DAZN, if that’s what they want. So Loma-Campbell wouldn’t be out of the question down the line, but it won’t be next.

Commey (28-2, 25 KO) is the opponent Top Rank wanted Lomachenko to face last night. That was the design. Commey beat Isa Chaniev on Feb. 2 to win the vacant IBF lightweight title, and Arum wanted to match the winner of that fight with Loma in April.

But Commey broke his hand beating Chaniev, which Loma may have also done beating Anthony Crolla. So Commey couldn’t turn around by April 12 for a fight. Loma should be fine by the time Top Rank could put this together.

This is the fight that is probably the most likely. It ticks the boxes for Lomachenko, chiefly Commey having a title, and the idea has already been there.

Commey, a 32-year-old Ghanian, is a good fighter and has power, but he’d honestly be just about as big an underdog against Lomachenko as Crolla was. I realize that may sound extreme given what we just saw Lomachenko do to Crolla; after all, even in his two losses to Robert Easter Jr and Denis Shafikov, Commey was highly competitive and came away with a split decision both times.

But those are also easily the two best fighters Commey has faced, and they both managed a way to scrape a decision, even if there was some minor controversy. The real point is they managed it, and Easter and Shafikov are not exactly Lomachenko.

As for Commey’s power, which would have to be his equalizer against Loma, it’s real, but the KO percentage is certainly a little inflated. Easter and Shafikov both went the full 12, as did Gary Buckland back in 2014, as did Hedi Slimani in 2017. Styles make fights and all that, but I can’t see Commey’s power being enough to even the odds or come close to that with Loma.

That’s not a reason to not make the fight, mind you, because there really doesn’t appear to be anyone any better suited for a fight with Loma this summer or fall or whenever. The lightweight division right now is kind of like when the Jordan Bulls of the 90s got to the NBA Finals. They had to face someone. Lomachenko has to fight someone.

Super featherweight titleholder Gervonta Davis (21-0, 20 KO) was brought up at the post-fight presser. I’ll just let Arum and Lomachenko cover that one.

Lopez (12-0, 10 KO) is a terrific, exciting, in-house prospect at Top Rank. He’s fast, he’s got skills, he’s strong, he’s violent in the ring, he’s charismatic. He knocks people out. He does backflips and some people love it, and other people get mad as hell about it.

Arum has high hopes for the matchup down the line, but it’s down the line. The 21-year-old Lopez returns next weekend on the Crawford-Khan undercard against former European champion Edis Tatli (31-2, 10 KO), which is a fine matchup for Teofimo right now, but we’re obviously still a ways off from him challenging Lomachenko.

But, again, Arum loves the idea.

“I think the big pay-per-view fight for Loma — if Teofimo continues with this wild, wild streak — is Loma and Teofimo. That’s the fight that people will wanna see and pay for,” he said earlier this week.

We’ll have to wait a bit for this one, but it really might be worth the development time for Lopez.