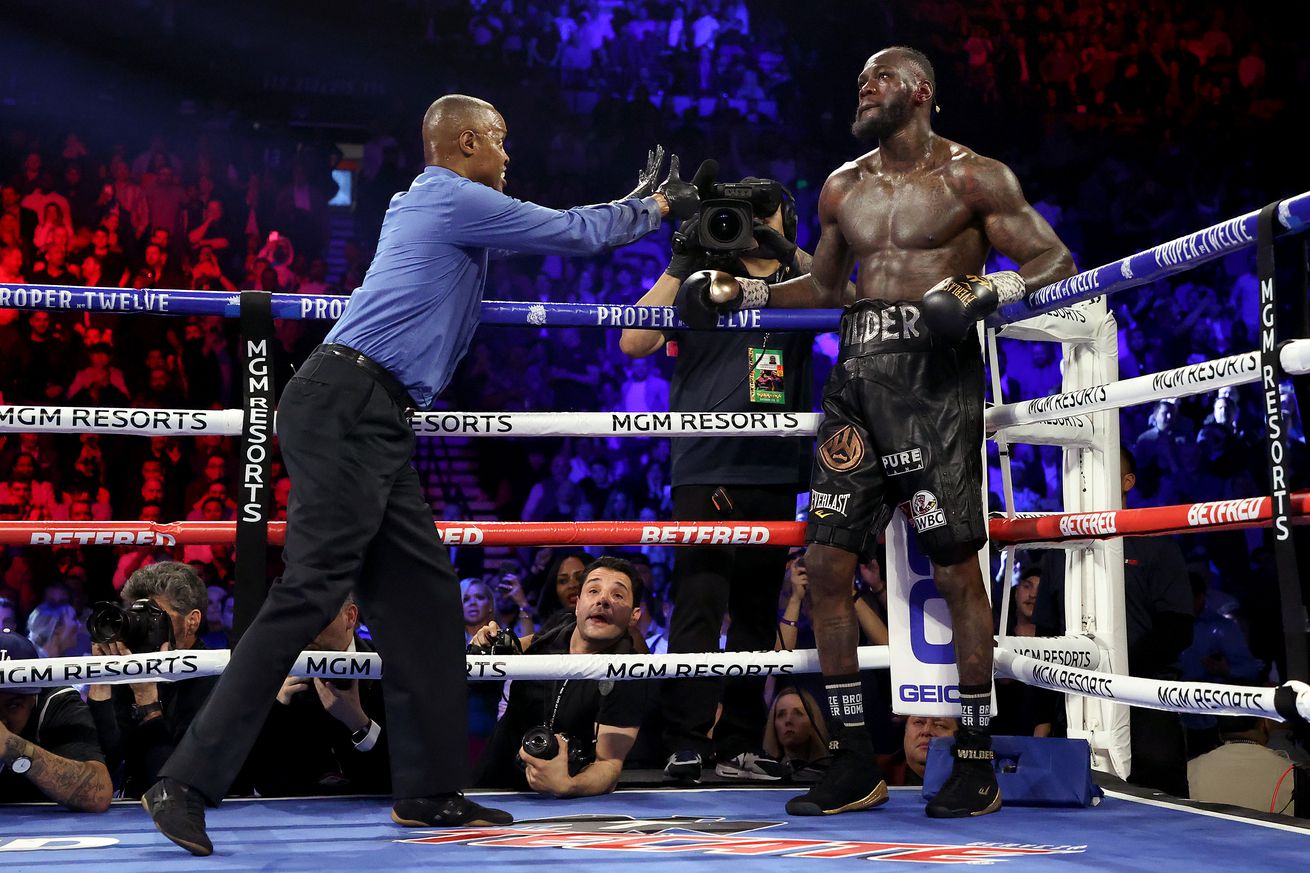 Wilder is going to great lengths to rationalize his stoppage loss to Fury.

Is Deontay Wilder coming apart at the seams? It would certainly appear so as the former heavyweight champion continues to throw out one excuse after another to explain away his knockout loss to Tyson Fury earlier this year.

If the weighty costume and glove tampering excuses weren’t bad enough, Wilder has since been throwing his former trainer Mark Breland under the bus. Breland, of course, was the one who threw in the towel for Wilder in the Fury rematch, much to Wilder’s dismay. Wilder has now recently come out to essentially claim that Breland was in on a ‘plot’ to dethrone him during an interview with 78 Sports TV.

“About 15 minutes before going out to the fight, warming up on the mitts, I was fuckin’ about to put a hole in the mitts. It was perfect, I felt great, I was going in. Until I went into the ring — that transformation from the point of leaving my dressing room and going into the ring drinking certain water and stuff, trying to keep myself hydrated and stuff like that, I just started feeling weird.

“And if my water was spiked as if I took a muscle relaxer or something like that…my water was tampered with, bruh…this feeling right here, it was a different feeling. It’s like I had no control over my body, my legs was weak and stuff like that. But although my body was weak, my mind was very strong.

“We even had somebody on film try to tell (Mark Breland) ‘throw the towel in, they got a rematch (clause).’ He was so eager to do it, because I believe he was apart of it, bro. He was part of it. And even more so, I think he got something to do with my water as well. This is my beliefs because he was the only one handling my water. He was the only one…I have strong sources.

“Something was in my system that wasn’t supposed to be. They plotted and planned this, and they had help too…Even when I walked into the building it felt demonic, bro. It felt weird. It felt weird…And the referee coming in the dressing room, I can feel his negative energy. This man eyes looked like he done took a cocktail drink before going into the fight. His energy felt like ‘I’m gonna do something to you, black man.’..

“My team know this about me. Five years I’ve been preaching ‘don’t even throw no towel in, bruh.’ And that’s why it’s even worse…It’s a reason why he threw that towel in and it ain’t because he was saving my life! Because if he was saving my life then why the fuck didn’t he save my life in the Ortiz fight when I was worse situation than this fight. I was in a rapid fire, head blows, you know — that’s the time when you throw the towel in.

“We warned Mark not to do that. That wasn’t even Mark’s place to do that. And, on top of that, this motherfucker didn’t even give me a warning that he was gonna do it! A true trainer, or somebody that’s supposed to be legit supposed to warn you, ‘Look, you ain’t looking good, champ. The next (round) if you don’t show me something I’ma have to…just letting you know.’ That’s somebody that care about you, that’s somebody that’s trying to save you…But if you apart of the plot, that ain’t gonna matter…He had to fulfill an obligation, he had to do something.

“Some shit was going on in my body (leading into the opening bell). It wasn’t feeling right, bro. And I’m just trying to keep my composure, trying to keep a bluff face because as a fighter you can sense a wounded dog…but in my head it’s ‘something’s going on, it ain’t right.’”