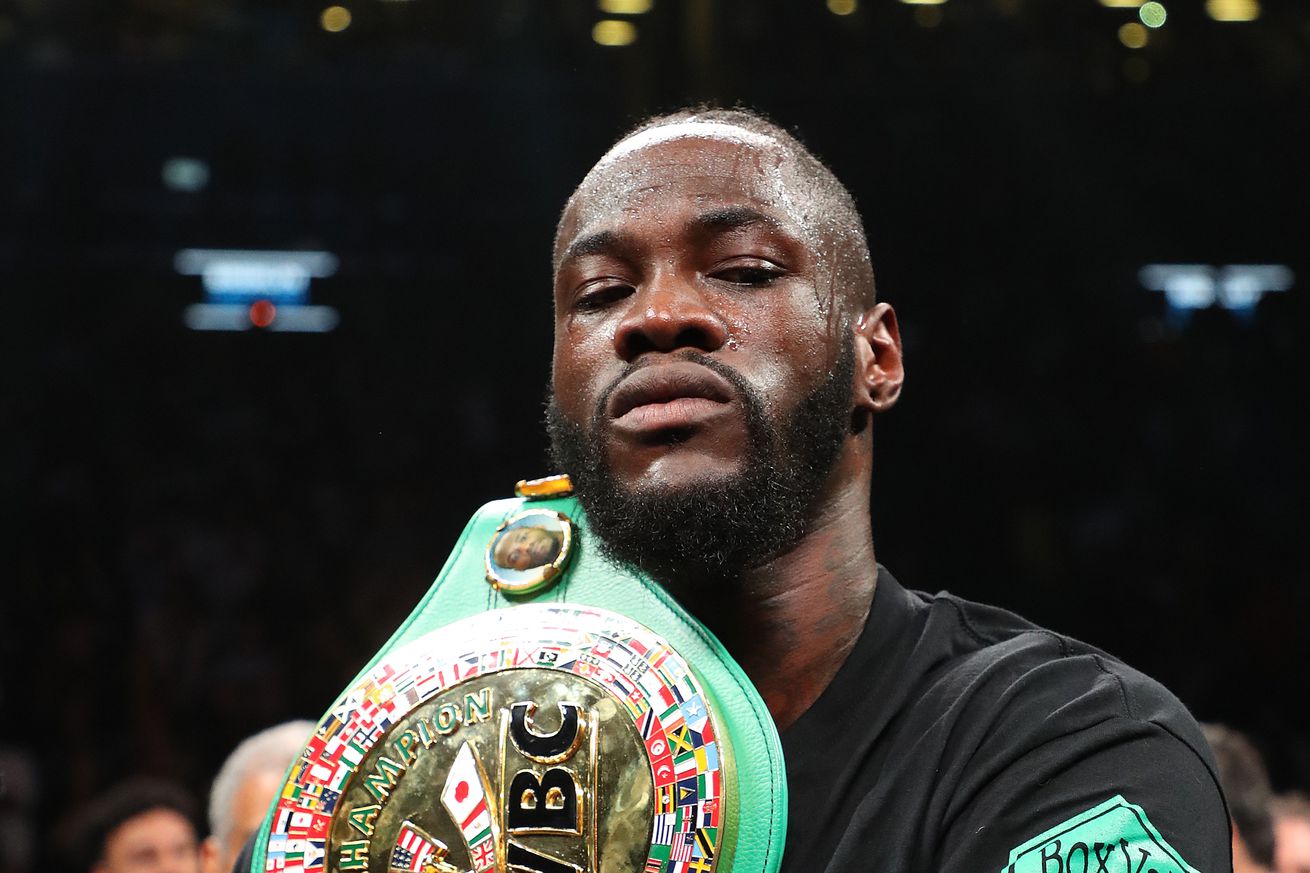 Wilder says he’d be embarrassed if he were Joshua.

WBC heavyweight champion Deontay Wilder just made an appearance on Scott Van Pelt’s show, and talked about his thoughts on Anthony Joshua losing all of his world titles to Andy Ruiz Jr. Check out some excerpts below…

Wilder on if he has the sense we’re in the midst of a heavyweight resurgence:

“It’s nothing like the American and when they get behind something, you know, it makes the sport even more blossom as it is right now.”

On his reaction to Andy Ruiz upsetting Anthony Joshua:

“I mean, you know, I wasn’t surprised at all. I told my manager Shelly [Finkel], I told him not to be surprised if Andy win, you know, ‘cause we was discussing him and I was thinking more so a 12-round fight…I never thought it would be, what was it, six or seven rounds? And it was amazing, you know, this is what boxing’s all about. You just can’t read a book by its cover.

“I always tell people I like to be the part instead of looking the part, because looking like you can do something don’t necessarily mean you’ll be able to do it, you know? But actually having the heart and being the part, it’s a whole totally different thing and a lot of people looked past him. I think they underestimated Andy as well because when they look at him they see this guy that looks outta shape, you know, and he came in there, he had a game plan, and he executed the game plan and now we have a new champion just like that.”

“[Ruiz] is a skillful fighter, and he was determined. There’s nothing like a man that’s determined, that has been knocked down. I tell people sometimes it’s alright to lose because people are already gonna expect you to get back up but they also wanna see how you get back up from being dropped down. That’s even in life in general itself, and this is his time to be knocked down, as far as Joshua’s concerned, and build himself up. But, you know, Ruiz, he’s always been skillful and he had his first title[shot] before against Joseph Parker and he end up coming short on that but he was more than ready for this opportunity.

“It makes it even better when you’ve got a guy in there that already looking past you because of the state that’s going on in boxing and trying to get that most highly anticipated fight that was in the world, which would’ve been against I. And you just can’t look past guys. And, you know, Joshua coming over for the first time in America, he’s been built up and boost up in height so big and you had to come over here and then fight a guy you’re looking past and get knocked out like that — man…I would’ve felt embarrassed. You know, he quit! The guy gave up in the ring. He got dropped four times and gave up.

“He’s supposed to be this big guy, you know, bigger than life, but I blame his promoter for all that. I’ma blame his promoter for bigging him up like that and always wanna be on the videos, always wanna do the interviews. It’s one thing about this sport, man. Having people on the outside, you can’t talk for people! ‘Oh yeah, I talked to Josh yesterday, he said this’ — it’s ok, you gotta be modest and mild with it a little bit. Because you can’t say so much because you’re not gonna be the one in the ring fighting at the end of the night.

“So not only was Joshua have to back up stuff that he says, but now he has to back up the stuff that the promoter that so love to have the attention and get in front of every camera that will give him attention and talk all this mess, and then when you get in with an opponent like Andy…and you get knocked down four times and then you give up, that’s humiliation and that’s embarrassment at the top of the class.”

On that outcome messing up his money, killing the momentum behind his proposed fight with Joshua:

“Well, you know, I think that fight will always be there. An 0 is, it doesn’t mean the end of the world when you have a loss. Many of our champions in history have came back from losses…A lot of people think when you lose, it’s over with because of the landscape that’s been going on, you know…It’s all about what you do upon defeat, how you get back up.”

On a rematch with Tyson Fury now at the forefront of the heavyweight division:

“Most definitely. That definitely will happen. Everything is good with that situation so we’re still keeping the light lit up in the heavyweight division. Just because [Joshua] lost and the megafight ain’t happening right now doesn’t mean it can’t happen in the future. It does mess up the money a little bit, but hey man — but not mines!”