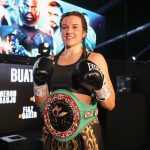 Only one notable fight produced a significant movement in one of the sport’s most talent-laden divisions.

And it could have been even more significant. But for now, our previously No. 5-rated Chantelle Cameron showed that she is ready for even bigger and better things than the vacant WBC female junior welterweight title that she claimed by outboxing Brazil’s Adriana dos Santos Araujo over 10 rounds.

Against a 38-year-old opponent who showed her no respect (in all the wrong senses of the word, from showing up grossly overweight to flirting with a potentially disastrous and embarrassing “wardrobe malfunction” thanks to an inadequate sports bra), Cameron stayed focused and showed off her phenomenal skills, all but shutting out an opponent that brought in a respectable double appearance at the Olympics and a 6-0 unbeaten run, only to produce a lackluster and uninspired performance in her biggest fight yet.

Cameron fought a brilliant fight, taking Araujo to the verge of a stoppage in a few occasions. And based on her performance and extraordinary upside, The Ring’s Women’s Ratings Panel had no objections to the proposal of moving her up to our No. 3 in the junior welterweight division.

There wasn’t a shortage of people who thought that she deserved even more.

“Cameron is head and shoulders above the rest of the division,” argued panelist Mark Jones. “Linardatou and McGee have the same manager who builds fighters by having them fight garbage, which is why they fail against real competition. Cameron will destroy them both. Her real competition will be from Farias or Taylor.”

“It was really sad to see Araujo in that condition,” said the Argentine writer. “Chantelle put up a good fight and her condition is promising.”

The new Top 5 looks as follows:

The post Women’s Ratings Update: Chantelle Cameron moves up at 140   appeared first on The Ring.