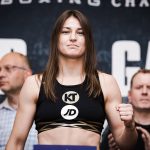 It was only a few years ago that the possibility of a major boxing card headlined by three women’s bouts and broadcasted worldwide was difficult to even imagine. Now it is a reality, and the talent displayed in those cards can rival that of many of the all-male cards that still dominate the scene.

Such was the case this past Saturday, in which undisputed lightweight champion Katie Taylor defended her belts against a fellow undefeated fighter and made her case to finally be recognized by The Ring as the best female fighter on the planet, regardless of weight class.

After a vote that included only a few adverse opinions, Taylor has now reached that position, becoming the new queen of the pound-for-pound rankings after an extraordinary display of speed, skills, poise and aggression in her title bout against Spain’s Miriam Gutierrez at London’s Wembley Arena.

“With that great performance, I believe Katie Taylor has to be recognized as the best current boxer,” said Japanese writer and Ring panelist Yuriko Miyata, in a sentiment echoed by many of her peers, such as Yesica Palmetta. “I agree to place Taylor as the undisputed number one,” said the Argentine writer and panelist. “Her boxing style is really impeccable, and she has had a series of fights where she demonstrated a quality that leaves no room for doubt.”

The fact that Taylor greatly benefits from the quality of opponents in her weight class as well as in the adjacent categories was not lost in the debate. The Irish fighter has a number of possible quality rivals that are not accessible to Claressa Shields, who has all but cleared her division and has only a handful of remaining challenges outstanding. But in sheer talent, ring generalship, skills and dominance, Taylor now stands clearly on top of the list after a complete dismantling of her latest opponent in such devastating fashion.

“Shields has more hardware, but six of the eight titles she’s won were vacant,” said columnist and panelist Michael Montero. “Meanwhile, Taylor fights in a much deeper division. Katie has wins over two current P4P fighters, including one who is the undisputed champ two divisions above her. Some will see it as controversial, but Taylor has clearly beat better fighters than Shields has.”

Even so, sending Shields down to No. 2 was not a unanimous decision.

“Gutierrez was nowhere near Katie’s level,” said Mexico-based panelist Irene Deserti, justifying her negative vote. “It was obvious that a boxer of Taylor’s stature was going to look her best against Miriam.”

Considering how extraordinarily well Taylor has performed so far in her career and in her last few bouts, she will probably remain at the top for quite a while, and Shields may have her work cut out for her next year if she wants to reclaim the mythical pound-for-pound crown.

Harper reaches the No. 1 at junior lightweight

Fighting against a talented, undefeated opponent, and having injured her hand badly in the first third of the bout, England’s Terri Harper was facing the possibility of going into “survival mode” just to hang on to her unbeaten record and her belt.

Instead, the WBC 130-pound titleholder defended successfully with a masterful performance, slowly breaking down Norway’s Katharina Thanderz and softening her for a stoppage in the ninth round, courtesy of a crippling body shot followed by a barrage of punches that convinced the referee to stop the contest.

The panel decided that Harper’s win, combined with No. 1’s Maiva Hamadouche lack of activity, was enough to have her move up to the top spot in the junior lightweight division.

“Harper has been more active and has retained her title against near-vicious opposition,” said Mark Jones, in agreement with fellow panelist Thomas Gerbasi. Smith also called it a “great performance, and with a broken hand from the 4th round on!.”

“Personally, I think Hamadouche is the best in the division,” argued Miyata, “but as mentioned, Harper is much busier and able to show her performance.” Deserti said “I expected more from Thanderz, I feel like she has more to give, but it wasn’t her night. I agree to raise (Harper) above Hamadouche. Terri looks more and more technical in her boxing, and very solid.”

Elsewhere in the ranking, it was decided that Miriam Gutierrez’s heartbreaking loss was not bad enough to demote the Spanish warrior in the lightweight rankings.

“The Rocky-like toughness Gutierrez displayed is evidence enough for me to keep her at #4,” said panelist Mark Jones. “Gutierrez is definitely a tough one,” agreed Lupi Beagle, while panelist and historian Malissa Smith agreed by saying “she put it all on the line and kept going”.

Thus, Gutierrez remains at No. 4 in the 135-pound division.