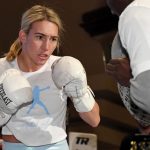 One of the most eventful weekends in female boxing has produced seismic movements in The Ring’s Womens’ Ratings, the biggest one being the inclusion — by the slimmest of margins — of newly crowned junior lightweight titlist and Olympic bronze medalist Mikaela Mayer in the No. 10 position at our pound-for-pound ranking.

Mayer (14-0, 5 KOs) soundly defeated Poland’s previously unbeaten WBO champ Ewa Brodnicka (now 19-1, 2 KOs) in what was expected to be the graduation night for a future superstar. Mayer delivered, and in the process she looked superb for most of the fight. Brodnicka did manage to connect with accuracy and power late in the game, but her constant holding made her look extra bad in contrast to the surge.

Mayer’s performance earned her rave reviews from our panel.

“She has grown with each bout and will, in my opinion, dominate the division,” said Malissa Smith, while Wildalys Figueras-Snow considered that Maner “had a flawless boxing demonstration against Brodnicka.” Yesica Palmetta was not so enthusiastic, stating that, “I am not too convinced on this. I think we should wait. Mayer is doing a great job and she is one of my favorite fighters, but I believe this decision is premature.”

Mayer’s entrance in the mythical ranking was also the product of several other situations. First, the exit of one of Mexico’s most decorated female boxing champs in Mariana “Barbie” Juarez, who suffered a devastating loss against Yulihan Luna Avila and was subsequently dropped from our rankings altogether. This created an opening for a new No. 10, and Mayer edged Japan’s Naoko Fujioka by just one vote.

Mayer was also unanimously promoted to the No. 3 position at junior lightweight, with only Maiva Hamadouche and Terri Harper ahead of her, which puts all three of them in “Ring championship territory” in the near future. “We must wait until November 14 to see Harper’s result against (Katharina)Thanderz,” said Figueras-Snow, reflecting the great expectation surrounding this impending fight between two unbeaten young fighters. With the right results and the right matchmaking, The Ring’s inaugural junior lightweight title belt could be contested very soon among some of the most exciting female fighters in a division that is increasingly looking like one of the most interesting ones out there.

The fight that created a spot for Mayer in the Top 10 was a weird one, indeed.

In a major upset, Mexican legend Mariana “Barbie” Juarez was soundly beaten over 10 rounds by Yulihan Luna Avila and thus relieved of her WBC bantamweight title in the process. Avila, 15 years younger and only a couple of dozen pro bouts under her belt, produced severe injuries on Juarez’s face, which prompted the 20-year veteran of the fight game to complain about the possibility of Luna Avila using tampered gloves and/or hand wraps.

Luna Avila surrendered her hand wrappings to the WBC after the bout for an additional round of controls, but no irregularities were reported. Juarez has demanded an immediate rematch and will probably get it, but in the meantime she lost her previous No. 9 spot in the pound-for-pound ranking and was dropped from the bantamweight rankings as well, with Luna Avila entering at No. 5.

Another major change was the inclusion of Britain’s Savannah Marshall (Claressa Shields’ only conqueror at the amateur level) in the middleweight rankings after a demolishing win over fellow Brit former titlist Hannah Rankin, in which Marshall picked up the vacant WBO 160-pound belt. Marshall’s superb performance may thus set up the next superfight in female boxing: Marshall vs. Shields. Social media is already abuzz with anticipation, and Shields wasted no time in hyping a potential fight with a barrage of provocations on Twitter.

For now, the panel decided that Marshall should occupy the No. 3 position at middleweight, while she remains also in the Top 5 at 168 pounds. Her potential clash with Shields may happen at either weight class.

In what was probably the toughest and most even matchup of the weekend, Marlen Esparza rebounded after her heartbreaking loss (with a horrific injury included) against Seniesa Estrada in her last bout, by halting the progress of one of boxing’s “most likely to succeed” female fighters in Sulem Urbina.

Esparza showed tremendous heart and control of the ring in her clear win over the previously unbeaten Urbina, and the panel was unanimously enthusiastic in its assessment by placing Esparza at No. 5 in the talent-laden flyweight division, dropping Argentina’s Leonela Yudica out of the rankings to make room for the Houston native instead.