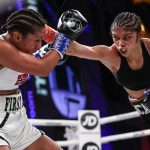 If their first fight had ended as many observers had anticipated, history would have been made, again.

If Cecilia Braekhus had defeated Jessica McCaskill in their first encounter on Aug. 15 (an emotional, gritty, street fight between two warriors), the “First Lady” would have bested Joe Louis’s all-time title defense record with 26-0 championship retentions.

It was not to be, however, and now Braekhus and McCaskill will have yet another chance to make history with their recently announced rematch sometime in early 202. The Ring’s top two rated welterweights will have the chance to win The Ring’s first-ever women’s title belt in the 147-pound division. A common misconception (stemming from the fact that Braekhus graciously handed McCaskill her entire trunk load of title belts after the fight) is that McCaskill had already gained possession of a Ring belt, since she lifted the legendary red, white and blue trinket in the ring after her victory. But that belt was Braekhus’ honorary pound-for-pound title (the first-ever presented to a female boxer by The Ring in 2018) and as such it was not as automatically transmissible as a divisional belt.

This time, they will both be eligible to grab the first Ring women’s welterweight championship, and this added bonus may be just the final touch of inspiration that could turn this fight into an even more emotional street clash for both combatants, who fought their first encounter literally on a street corner in downtown Tulsa, Oklahoma.

The pair will be also disputing all four major title belts recognized by The Ring (IBF, WBA, WBC and WBO).

With all this at stake, it is hard to envision anything less than a terrific sequel to their memorable first bout, and (ideally) a second chapter of what can ultimately become the first great trilogy of women’s boxing.

But that’s a historic moment that we’ll have plenty of time to discuss in the future.

Claressa Shields, The Ring’s pound-for-pound queen, added another gem to her crown when she was unanimously voted as the world’s No. 1 fighter in the 154-pound division, a weight class in which she still holds two major titles.

The inaugural version of the junior middleweight division looks as follows: Should Shields return to this division in the future, she will qualify to win her second Ring belt if she beats Canada’s Marie Eve Dicaire.

The announcement of the McCaskill-Braekhus rematch also prompted the panel to open a new spot in the 140-pound division. The panel voted Chantelle Cameron (who is reportedly scheduled to fight for a title belt in this division in her next bout) to enter the ranking at our new No. 5 in the junior welterweight division, which now looks as follows:

Although the vote was overwhelming in favor of a motion to bring in Cameron at No. 5, our panelist Mark Jones was even more emphatic in his praise for the unbeaten British contender and former 135-pound queen:

“In my opinion, (…) Cameron should head the division. Farias was better as a lightweight, Hernandez is close to drawing social security, and McGee is less-than-ordinary, but has a punch”.

“Although Farias has lost 4 times, it was against the best (Persoon, Braekhus, McCaskill). McGee hasn’t been the most active; she’s fought just 7 times since losing to Farias in 2013, and most of them were 6-rounders”.

The decision to make Cameron our No. 5, however, received the most votes, and she will have a chance to make a significant jump towards the top of the ranking if she manages to grab a major title in her second division after only a dozen professional bouts.