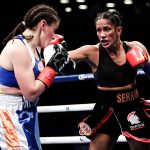 After a successful and very well received launch last week, The Ring has continued compiling Top 5 rankings for the remaining eight divisions in which women’s boxing has seen a consistent level of activity during the past few years.

The remaining “traditional” divisions (light heavyweight, cruiserweight and heavyweight) do not have, for the time being, enough active competitors to warrant a viable worldwide ranking.

Mischa Merz – veteran journalist, author of two boxing memoirs, and currently a boxing gym owner in Melbourne, Australia, where she is the head coach at Mischa’s Boxing Central. Merz, a fulltime journalist (newspapers and magazines) for the past 30 years, is a former Australian amateur boxing champion and a masters Ringside world champion. She also won the 2009 U.S. Women’s National Golden Gloves title in the master’s class. She has served as coach for both male and female boxers in her country and in Papua New Guinea, and has worked as sparring partner with three world champions: Susie Ramadan, Diana Prazak and Alicia Ashley, as well as top amateurs and professionals in Australia and the U.S.

Michael Montero – a boxing writer for The Ring magazine, RingTV.com, and a regular guest on several national sports radio shows, Montero has done hosting, commentary and unofficial media scoring for live fight cards, and is also the host of “The Neutral Corner”, a YouTube program that can be seen every Monday on TheRingDigital YouTube channel (audio can be heard on podcast platforms around the world). He sits on the divisional ratings committee for several publications.

Without further ado, let’s get to this week’s Women’s Ring Ratings Update:

After a quick deliberation, no changes were made to any of the rankings created on the first week, given that there was no significant action anywhere in the world to warrant it.

A definitive word is still being awaited from Jessica McCaskill and Delfine Persoon regarding their choice of weight class for the foreseeable future. Although certain comments have been made by both fighters, a more definitive announcement is expected before reassigning them to a different division.

In the following eight divisions, all championships are vacant. Therefore, any fight between the top two fighters in any division, as listed, will qualify for The Ring’s inaugural championship belt in that division. One peculiarity of this week’s rankings is that three different fighters were voted unanimously by the entire panel to occupy the No. 1 position in their respective divisions. They are:

Here are the rankings in the eight divisions added this week (last week’s ratings remain unchanged, across all divisions):