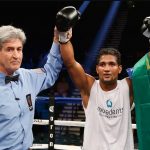 The Golden Boy card will take place two days before the highly-anticipated middleweight title unification bout between The Ring Magazine/WBA/WBC champion Canelo Alvarez and IBF beltholder Daniel Jacobs, which will take place across town at the T-Mobile Arena.

Falcao (16-0, 7 knockouts) represented Brazil at the 2012 Olympic Games in London, earning a bronze medal. Now residing in Plant City, Florida, Falcao will be fighting for the first time since July 21, when he defeated Elias Espadas by unanimous decision. The 31-year-old Falcao is ranked No. 9 by the WBC, one slot above younger brother and contender Esquiva Falcao, who is promoted by Top Rank.

Falcao and Pearson are very familiar with one another as they faced each other in the amateurs in 2011, with Pearson defeating Falcao in the World Series of Boxing tournament. Falcao wants to even the score.

“I know him from the Olympic Trials and this match is personal,” said Falcao, who is promoted by Golden Boy. “I am focused and ready to deliver an explosive performance and show the world that I am ready and willing to compete for a world title. All we need is the opportunity and we will fight any top-ranked boxer in the world.”

Pearson (16-2, 12 KOs), who resides in Trotwood, Ohio, knocked out veteran Lenwood Dozier in his miost recent bout on October 6. The 28-year-old Pearson has won his last two bouts since his second round knockout loss to Justin DeLoach in February of 2017.

“I look forward to putting on an impressive performance on May 2 and, most importantly, to getting my hand raised,” said Pearson, a former amateur standout.

Two fighters promoted by Eye of the Tiger Management who recently signed co-promotional deals with Golden Boy Promotions will also fight on the May 2 card.

Super middleweight contender Erik Bazinyan (22-0, 17 KOs) will square off against Alan Campa in a 10-round bout.

Bazinyan, who is originally from Armenia and now resides in Montreal, Canada, is ranked No. 4 by the WBO. He stopped Adrian Luna Flores of Mexico in his most recent bout on December 14.

Campa (17-4, 11 KOs) resides in Guaymas, Mexico and has lost two of his last three fights.

Middleweight contender Steven Butler (26-1-1, 23 KOs) of Montreal, who is ranked No. 5 by the WBO, will also appear on the card.

In a clash of unbeaten junior lightweights, Francisco Esparza (9-0-1, 3 KOs), of Las Vegas, who is trained by former IBF junior middleweight titlist Fernando Vargas, will face Aram Avagyan (8-0-1, 4 KOs), of Moscow, Russia in a 10-round bout.

Middleweight Alexis Salazar (21-3, 9 KOs), who trains alongside Canelo Alvarez, will square off against Abraham Cordero (13-3-2, 7 KOs) in an eight-round clash of Guadalajara residents. The post Yamaguchi Falcao to face Christopher Pearson on May 2 appeared first on The Ring.