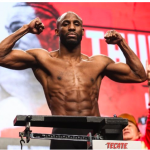 Yordenis Ugas knows sacrifice. Coming from Cuba, where professional boxing had been barred for decades, and Olympic caliber fighters had to leave their families and homes behind to pursue a career in the U.S., Ugas understands having to give up something to gain something else.

So it was that the 34-year-old, long wanting to break out into the upper echelon of a star-heavy welterweight division, never lost sight of that goal, training in Las Vegas through the pandemic to work towards his third straight win.

That opportunity comes Sunday, when he faces Abel Ramos at the Microsoft Theater in Los Angeles, headlining a FOX PBC Fight Night card. The fight will be contested for the WBA’s “regular” championship, not viewed as a one of the four major world titles by The Ring magazine, but having that as a bargaining chip will finally allow him to break into the big fight club, he hopes.

Many sacrifices for a Cuban boxer to become a professional.The biggest sacrifice I made was not seeing my family for over 8year.This is the time for me to return to Cuba.There were no tears,there was no emotion.Mama and I had many years crying.On Sunday everything will make sense pic.twitter.com/WMFvRoqAcS

Ugas, who took off more than two years after losing back to back fights in 2014, had won eight straight since coming back in 2016, including wins over previously unbeaten prospects Jamal James and Bryant Perrella, before getting his shot at one of the top guys in the division, Shawn Porter, in March of 2019. In that fight, Ugas was a puzzle Porter had struggled to solve, and though the split decision went to Porter, Ugas and many others felt he deserved the win.

Though his team wants Ugas to eventually mix it up with Errol Spence, Keith Thurman or even Terence Crawford, Ugas knows that none of that talk matters if he can’t get past Ramos, who is coming in on an eight fight winning streak, including a come-from-behind knockout of Perrella with just one second remaining in February.

“I have all the respect in the world for him,” said Ugas, of the 29-year-old from Arizona. “I know he’s a tough fighter, a strong fighter, strong Mexican fighter and he’s gonna come to fight. That’s what I’ve prepared for, and that’s what I expect from Abel Ramos.”

Ramos has also been putting in elite level to prepare for this fight, traveling to Nebraska to spar with Crawford and Maurice Hooker. At a pre-fight conference call this week, Ramos conceded that he’d have to be “sharper than I have ever” been against an intelligent counterpuncher who “doesn’t make mistakes.”

“Ugas is right up there with anyone I’ve faced. There’s a few guys I face who have already become champions like Regis Prograis and Maurice Hooker, and Ugas is definitely on their level,” said Ramos.

Ugas expected nothing less from Ramos, who is hoping to book his own entry into the upper echelon of the division with a win.

He definitely fought respectable opponents like Jamal James, I respect the guys he’s been in the ring with and he’s a competitive fighter. Who knows, maybe he feels I am on a different level from him and sometimes that can motivate other fighters to level up their game,” said Ugas.

Ugas says he understands why it has taken him this long to get the big fights he wants, but he expects all that to change if he gets past Ramos.

“I feel 100 percent after I get the belt on Sunday that’s gonna change. Other fighters have hesitated to get into the ring with me because I’m a dangerous fighter against any of those guys and I wasn’t a champion before,” said Ugas.