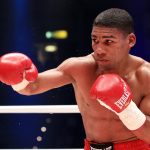 Gamboa (30-3, 18 knockouts) is pleased to be back in a big fight following a courageous effort against Gervonta Davis last December.

“I think it’s a well-earned opportunity,” Gamboa told The Ring through his manager Jesse Rodriguez. “Throughout my career I have demonstrated I am a top fighter. My last fight against Davis, I showed I am a true warrior. I come to fight no matter who it is.

“I don’t think about my opponent, I’m just training hard. Devin is a strong fighter.”

The 38-year-old Cuban-born fighter, who claimed gold at the 2004 Olympics, wouldn’t be drawn into discussing Haney’s skillset and is playing his cards close to his chest.

“I know what I have to do and I would rather not share that,” said Gamboa, who is quietly confident that he can pull off the upset. “God is with me. He will give me strength to face anyone in the ring. My trust is in God.”

Gamboa’s faith helped him during his most recent fight, the 12th-round stoppage defeat at the hands of Davis.

“I was able to overcome [a ruptured right Achilles] because God was with me,” said Gamboa. “It gave me the strength to overcome that.”

“El Ciclon de Guantanamo” (The Cyclone of Guantanamo) had surgery in January and wasn’t able to exercise until March. He then spent four months getting back into shape with his trainer, Pedro Roque, in Miami.

“I focused 100-percent on the rehab and getting my leg stronger,” Gamboa said. “Little by little, I was able to do a full work-out on it.

Rodriguez, who handles several up-and-coming Cuban fighters, believes that his fighter shouldn’t be underestimated despite the odds being against him.

“Gamboa’s ready,” said his manager. “Everyone is expecting him to lay down and be walked over, but he’s coming to fight. He’s coming for that title.”

The super-talented Haney turned professional at 17 years old in Mexico. He has scored wins over Menard (RTD 9), Juan Carlos Burgos (UD 10) and Antonio Moran (TKO 7). Following a dominant win over Zaur Abdullaev (RTD 4), Haney was upgraded to WBC titleholder and outboxed Alfredo Santiago (UD 12) in his maiden defense. Unfortunately, the 21-year-old suffered a shoulder injury against Santiago that required surgery, but he is now fit and ready to return. Haney enters the bout sporting a record of 24-0 (15 KOs).

The bout plus undercard action will be streamed live on DAZN in the U.S.

The post Yuriorkis Gamboa ready for Devin Haney: Throughout my career I have demonstrated I am a top fighter appeared first on The Ring.