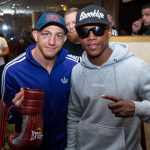 Cletus Seldin was wondering what was happening. The “Hebrew Hammer” just scored the biggest victory of his career—stopping former two-division titleholder Zab Judah at 1:40 of the 11th round on Friday night at the Turning Stone Resort & Casino, Verona, New York, in a scheduled 12-round junior welterweight bout.

Judah, 41, got out of there quickly, because he felt the fight shouldn’t have been stopped.

Afterward, Seldin had one goal on his mind: Find Judah to sign a pair of gloves and take a picture of it. Seldin found Judah at the Emerald Cafe in the Turning Stone around 2 a.m. Saturday.

Yet, Seldin’s phone was blowing up Sunday morning. Seldin (24-1, 20 knockouts) had heard everything from Judah was possibly dead, to Judah being in a coma. The fact is, Judah admitted himself to a local hospital and there was a brain bleed found, but according to everyone associated with the fight and the Judah family, “Super” is in still in the hospital, though he is awake and responsive.

“It was crazy, because I saw Joel Judah, Zab’s father, at the hotel later on and he didn’t look concerned or anything (Saturday morning),” Seldin said. “He told us Zab was stable and there was nothing to worry about. He was doing fine. Twenty-four hours later, I heard everything.

“Zab was maybe dead, he was in a coma. It was little crazy to see the stuff Sunday morning. It scared the entire boxing industry. That was crazy. I won the fight and I felt like I was in a car crash myself. My face is a little beat up. Every part of my body aches. My ass even hurts. I don’t even know why my ass even hurts.”

The rumor mill shouldn’t diminish what Seldin, 32, accomplished. He had Judah in trouble late in the third, he said, and that was the turning point.

Seldin kept applying steady pressure to Judah (44-10, 30 KO) and in the 11th appeared to have Judah in trouble again, smacking him against the ropes. That’s when referee Charlie Fitch stepped in and waved it over. Judah was angry over the stoppage, since he had plans of making another title run, even at the age of 41.

But it was Seldin who came out ahead and wants to build more on this victory.

“I read some reports that Zab probably took about 300 head shots, and it was little shots over, and over, and over again,” Seldin said. “Those little shots were going to hurt throughout time. That’s what hurt Zab. I have nothing to say but good things about Zab Judah.

“He is one hell of a champion and a fine human being. He’s a remarkable man who knows how to fight, and he’s a champion who never wanted that fight stopped. I understand that. He has a fighter’s heart.”

Like Seldin, who credits trainers Pete Brodsky and Scott Lopeck for the game plan and putting him in a position to win.

“They gave me new tools to learn and I was pretty excited to go to the gym every day,” Seldin said. “Look at that fight, and you’ll see, I hit him with a right hand to the body. That was the opening and that’s what I saw. I was able to cut the ring off and not have him escape on both sides.

“I wanted to dominate the left side and keep Zab just to one side, that would help me. It’s a mistake I made in my fight against Yves Ulysse Jr., because he was able to work both sides when I came forward. Once I cut the ring off, I had him.”

Seldin said he wants to get back into the ring as soon as possible. He says he feels happy that Zab Judah is doing well, and by all accounts, according to him and those close to the Judah family, Judah is going to be okay.

“You hear all of the crazy things out there on Twitter and the internet,” Seldin said. “You can’t trust what you see. I’m happy Zab is okay. I’m happy I was able to get a picture with Zab and I look forward to fighting again.”

The post Zab Judah hospitalized after TKO loss to Cletus Seldin, but showing improvement appeared first on The Ring.