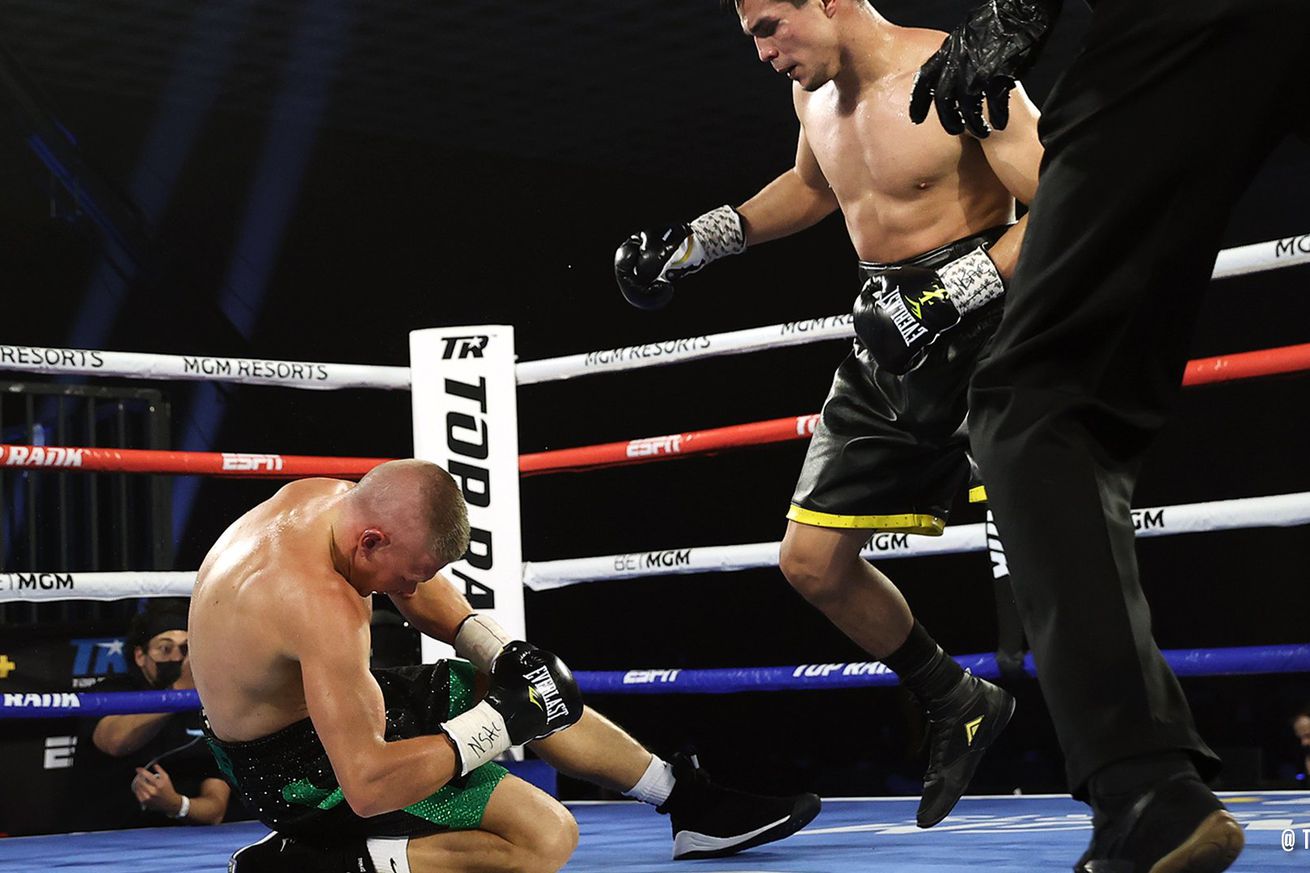 Jose Zepeda and Ivan Baranchyk put on an otherworldly display of action, power, grit, and determination in a thrilling main event.

Boxing just doesn’t get a lot better or more thrilling than what we saw tonight. Jose Zepeda and Ivan Baranchyk combined for eight knockdowns inside of five rounds, and the last one was probably the Knockout of the Year for 2020, ending what was definitely the new leader for Fight of the Year.

Zepeda wound up landing the final brutal shot, knocking Baranchyk out at 2:50 of the fifth round to secure a No. 1 ranking at 140 pounds with the WBC, but the story of this fight is just how utterly chaotic, insane, unpredictable, and exhilarating it was from start to finish.

Zepeda (33-2, 26 KO) got a taste of what Baranchyk was going to come with from the opening bell, as the 27-year-old from Belarus stormed out of the gates throwing an aggressive left hook, which did land. Zepeda, the 31-year-old from La Puente, Calif., found himself on the canvas two times in the opening round, and it looked like it could be a long — or short — night for him.

Zepeda had what should have been scored a knockdown against Baranchyk early in the second round ruled a slip, but he kept coming and dropped Baranchyk hard not long after. Then, just as Zepeda was looking to finish, a wobbly Baranchyk landed a desperate right hand counter that put Zepeda on the canvas for the third time in the fight.

Baranchyk went down again in the third and fourth rounds, and the fight by that point had already reached an instantly legendary sort of feel. Every time they exchanged, it felt like the fight could come to a sudden end.

With Zepeda looking to be in control in the fifth round, Baranchyk floored Zepeda for a fourth time in the fight, only to have it all come crashing down moments later, as Zepeda clipped Baranchyk with a check right hook and followed with a clean, vicious left hand from underneath, putting Baranchyk out on his feet and out on the canvas. The fight was over. The war was over. And boxing had a new all-time classic.

Baranchyk (20-2, 13 KO) was down on the canvas for an extended period of time, and all attention was then on his well-being. But he was communicating with the physician in the ring, and said physician never seemed overly concerned — we don’t want to downplay the severity of the knockout or anything like that, but the doctor took his time, gave Baranchyk his time, and Baranchyk eventually sat up, communicated better, and walked out under his own power to be taken for medical attention at a local hospital.

Timothy Bradley, the former two-division world champion who was calling the fight for ESPN+, called it the best fight he’s ever seen live. I’m not Timothy Bradley by any stretch of the imagination, but we’ve been doing BLH for 14 years, have covered every big fight there was to cover in that time, and this is an immediate elite-tier fight that I’ve ever had the pleasure of watching live myself.

“I feel great because I won the fight, it was a hard fight. Boxing is hard, it’s no easy game. It’s tough and you’ve got to give it 110 percent,” Zepeda said after the win. “I thanked (Baranchyk) for the opportunity. I was able to win the fight and I told him thanks for the fight, it was a great fight.”

Zepeda says he learned something new about himself in the midst of this epic showdown, too.

“I know I’m tough. I didn’t know how tough I was. Tonight I showed it, and I showed myself, too. It was the first time I was in a fight like this,” he said.

Here’s a look at just some of the action from tonight’s amazing fight:

This is wild, guys. Get on this stream … now.

Flores got shook a little bit in the first round on a left hook from the veteran Kielczewski (30-5, 11 KO), a 31-year-old from Massachusetts who has long had a level, but is a competent and game fighter who always comes to work and gives the effort. He did it again here, but he didn’t have the speed or skills to really bother Flores once the younger man settled into the fight.

“I was not buzzed at all. I was off-balance on my heels, which is rare, I’m always on my toes,” Flores said of the first round hook he took from Kielczewski.

It was another fight where Flores clearly won and maybe still didn’t fully impress everyone, which is a big thing to ask, Floyd Mayweather didn’t always impress everyone but he did OK for himself. But there seem to be some worrying potential limitations with Flores. He’s not a big puncher, and there’s a sense that the fights too far have perhaps been too easy for him to get into and stay in a rhythm, with opponents not good enough to make him go to a higher gear.

And Flores did say, to his credit, that he wasn’t totally happy with the performance, feeling he can make some improvements still, which being entirely fair is the sign of a smart fighter who doesn’t already think he’s unbeatable, and that’s a good thing for his level.

The basic thing, I’d say, is that the jury remains out on Flores, but it’s clear he has real skills. It’s a question of what level he can really get to, and how much more he can or will improve. But he has mostly made fights look easy, and whatever nitpicking you can do, that means he has done his job pretty well to date.

What really figured to be a relatively easy if decent-looking win for the ex-Olympian Vianello turned into a fight he was lucky to escape with a draw, in all honesty. Two judges had this 57-57 to make for the majority draw, but Adalaide Byrd had it 59-55 for Ibeh, which is just as reasonable. BLH had it 58-56 for Ibeh (5-1-1, 4 KO), the 26-year-old boxing novice, a former college and semi-pro sort of football player originally from Nigeria, now selling insurance and fighting on Top Rank cards out of Phoenix.

Ibeh did gas late here, but even tired he kept fighting when he could or when he had to, and Vianello (7-0-1, 7 KO) got exposed to some degree. Ibeh is a big, strong, athletic dude who seems to be taking pretty well to boxing overall, and he won some fans in a “cult favorite” fashion in a couple of bubble fights in the summer, and this should only win him more. If he can continue to make improvements, get his boxing conditioning right, he might be a serious prospect.

Vianello had a bad cut on the left eyelid from early on in the fight, but Stitch Duran did a good job with that in his corner. It probably affected his vision, but it was also from a clean punch, so fair is fair and all. That said, it was a really bad cut, and could be an issue for him going from here in his career.

Bottom line is stock goes up for Ibeh here, and goes down for Vianello, who was the taller guy by a couple inches, but Ibeh’s long reach and willingness to just throw hands kept the Italian off-balance a lot more than you’d like to see, and compared to Ibeh, he seemed indecisive and a bit stuck mentally at points. It was a very interesting fight. I’m not writing off the 26-year-old Vianello, either, but this one was a reality check after seven guys who mostly just kinda fell over to start his pro run.

An interesting matchup for the 23-year-old Ragan (2-0, 1 KO), a recent Top Rank signing and former amateur standout from Cincinnati, as he was matched with 36-year-old Moraga, a UFC veteran and former world title challenger there. Moraga doesn’t have any real future in boxing, but he gave a spirited enough effort and pushed the youngster through a full four rounds, giving him some things to think about. Moraga made Ragan create his own offense more than Ragan might really be comfortable with doing at this point, something that will have to improve as he goes forward. But Ragan got the clear win, sweeping all three cards on 40-36 scores, and is a prospect Top Rank clearly like, as they had him on the “main card” portion with Osuna and Bradley calling his action in just his second pro fight.

Decent fight between a couple of Puerto Ricans at 130 pounds. The 19-year-old Gonzalez (4-0, 1 KO) is part of Jose Pedraza’s team, and he has some skills, but he’s also raw and got clipped with some decent counters by Marrero (2-4-1, 0 KO) in this fight. The 27-year-old Marrero maybe deserved a round, but Adalaide Byrd was probably generous giving him two of the four. The other cards were 4-0 sweeps for Gonzalez, who will surely be seen again on Top Rank prelims.

This was pretty awful. Barnes, a 290-pound guy from Pine City, Minn., came in swinging like a barroom brawler, but got clipped repeatedly by Sipe, who has a 5-2 MMA record but was making his pro boxing debut. Barnes went down, and while he got up, he just did the same thing to the same results; he didn’t go down a second time, but referee Robert Hoyle clearly didn’t think Barnes had any idea how to defend himself so he stopped the fight in 43 seconds.

As far as technique goes, in what we could see in 40 seconds, Sipe didn’t look like any threat to climb the heavyweight ranks, either. Shout out to referee Hoyle, frankly, for deciding this didn’t need to happen any longer than it already had. There was a point after the knockdown, as Sipe came out of his corner for a high gloves MMA touch, and Hoyle was, like, “No, no, no, don’t touch, fight.” This was just not good, but it was memorable in its way, I can say that.

The pro debut for Brady, an 18-year-old featherweight from Albany, Ga., and a mess of a fight. Brady obviously has a lot to work on as far as effective aggression, accuracy, sitting down more on his punches, and all that, but those are young fighter things, especially when the kid might be amped up a bit too much for a pro debut. Karyah, a 30-year-old from Liberia and now fighting out of Philly, was a spoiler in good and bad ways. He was able to make Brady miss a bunch, which is good, but also most of his strategy was holding, which was bad and made the fight hard to watch.

Karyah (2-2, 2 KO) took a low blow in the first round and another in the second, which got Brady docked a point even though referee Russell Mora had also been repeatedly warning Karyah that his holding was causing the low shots. Karyah lost a point later for the excessive holding, but was stopped shortly after on a Brady flurry. It wasn’t a big, conclusive stoppage, but Karyah wasn’t throwing back and had been rocked a bit.

Reed (1-1, 1 KO) came in heavy on Friday, but it didn’t help him any, as Mariano (3-0, 2 KO) stormed through him in 87 seconds in this welterweight fight, scheduled for four rounds. Reed, a 21-year-old from Bakersfield, Calif., was dropped on a left hook and finished when he got back up, as the 26-year-old Mariano, from Reno, Nev., unloaded punches until Reed slumped in the corner on body shots mostly, and referee Robert Hoyle rightly stopped the bout.

Well … that’s one way to get things started off ‍♂️#ZepedaBaranchyk | LIVE on ESPN+ pic.twitter.com/O7pVMxFbMD