.Popular Call of Duty YouTuber TheXclusiveAce discovered what appears to be a potentially game-breaking problem with the new Modern Warfare.

Merely hours after a patch that brought two new maps and provided much-needed balance updates and bug fixes, TheXclusiveAce discovered what he describes as “another big problem with Modern Warfare”.

TheXclusiveAce’s newfound discovery is very similar to the notorious “head glitch”. “Head glitching” is a tactic that’s been used in many FPS games for years. 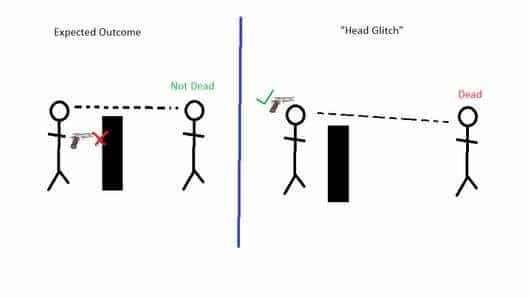 As (roughly) illustrated, “Head glitching” is when a player gets behind cover in a way that shows only their head. Since the camera angle in FPS games is located around eye level, the player ends up having a clear line of sight. Able to aim at targets freely. From the perspective of other players, it appears that bullets are traveling from the player head glitching’s eyeballs, rather than the gun. Making it exceptionally difficult for enemy players to fight back. All they can see is the top of the head glitcher’s head while the head glitcher can see them unobscured.

Head glitching is not technically a glitch. It’s simply an unavoidable flaw in the camera mechanics of FPS games. Developers have attempted to lessen the advantage head glitching gives in the past. But it is hard to eliminate it entirely. These same camera mechanics are what gives way for the problem discovered by TheXclusiveAce to make its way into the game.

So What Did TheXclusiveAce Discover?

TheXclusiveAce describes his discovery as an extreme example of “peeker’s advantage”. While playing casually, his girlfriend Enya was killed by someone that she couldn’t see on her screen at all. This can be seen at the beginning of his video on the subject.

Afterward, TheXclusiveAce decided to go into a private match to figure out what happened. What he discovered was that at certain angles, it’s possible for player 1 to see over half the body of player 2. While player 2 can’t see player 1 at all. This is due to the same camera mechanics we described when discussing “head glitching”. When abused, this new issue can give a player a massive advantage over others. Camera and perspective issues like these are hard to eliminate entirely due to how character models work in FPS games. TheXclusiveAce hopes that Infinity Ward can release a patch to at least lessen the discrepancy. It’s in Modern Warfare for Infinity Ward and Activision’s best interest to implement a solution sooner rather than later.

This was only just discovered publicly yesterday, it’s yet to be seen how players will use this new revelation to their advantage. If it goes unpatched too long, more and more players will start to exploit it. This may result in an even further increase in Modern Warefare’s “campy” nature.