ESTNN recaps all the action from day one of FNCS Chapter 2 – Season 4.

Fortnite’s fourth seasonal Fortnite Champion Series (FNCS) is officially underway after much anticipation. The competitive scene was made aware that trios would return to the spotlight in Chapter 2 – Season 4 two seasons ago. The world’s best trios have been working hard to polish their rotations, drops and loot paths. Now is the time for the top players to prove their skills and teamwork. Europe, NA East and NA West have all played one-half of their Grand Final matches. Let’s recap what has played out thus far in FNCS Chapter 2 – Season 4.

EU – Surprising Trio in the Lead, Top Names in Pursuit IDrop 74, Vetle 7 and Playwell Styrsix took a shocking lead after the first six games of the Grand Finals. The three leaders have managed 35 eliminations and one Victory Royale. Six more matches stand between IDrop, Vetle and Styrsix. However, some notable names are not far behind, namely trios led by Solary Floki, Grizi Nayte, Gamma Th0masHD and EP Mexe. Anything can happen over the final matches.

insane clutch from Benjyfishy to secure qualification for Week 1 Finals! from FortniteCompetitive

Top European player NRG benjyfishy produced quite possibly the most outstanding clip of the entire weekend during the European semi-finals. He earned four of his thirteen eliminations to close out a crucial match that pushed himself, MrSavage and LeTsHe through to the finals. It was quite a display of competitive Fortnite. Benjy, Savage and LeTsHe are in 14th place with six games remaining.

.@rezonay_ with a big time CLUTCH to squad wipe 👀 pic.twitter.com/Nw2znYpmsh

Rising superstar and current free agent rezon may have one-upped the previous clip at Benjy’s expense. Despite losing teammates Noahreyli and aqua, rezon took down benjyfishy, MrSavage and LeTsHe with some precise shotgun blasts. This kid continues to impress with each passing tournament. Rezon, Noahreyli and aqua currently sit in 19th place.

NAE – Zayt, Saf and Stretch Win Game One and Then Struggle

besides the fact that stark is uncon im not really upset with being contested. it's just part of the game and i dont really expect to do anything in trios besides make grand finals and then we will just play for fun. reality is you cant win a tournament while being contested

The NA East region played out a bit closer than its rivals across the pond. A different team won each of the six matches in the first half of the Grand Finals. The consensus best trio – NRG Zayt, TSM Saf and Liquid Stretch – came out of the gate firing with a quick Victory Royale. Zayt and company then struggled to win their spawn fights at Doom’s Domain over four of their next five matches, losing to rival Doom trio – Heart, Dxrant and Takened. Zayt seems dead set on not conceding his trio’s landing spot. They will look to rebound tomorrow.

NAE – There’s a Logjam Atop the Leaderboard

Three teams broke 100 points after the first half of the Grand Finals. Fortnite World Cup Champion Bugha and teammates C9 Avery and LG Jamper currently lead the way with 139 points. This outstanding trio remained consistent, finishing top-five in five out of six matches. Bugha and his team also managed a Victory Royale. Bugha’s bitter rival TSM Khanada and teammates BBG Bucke and BBG Kreo finished six points off the lead with 139. They have been one of the best trios over the last two seasons and are firmly in striking distance. 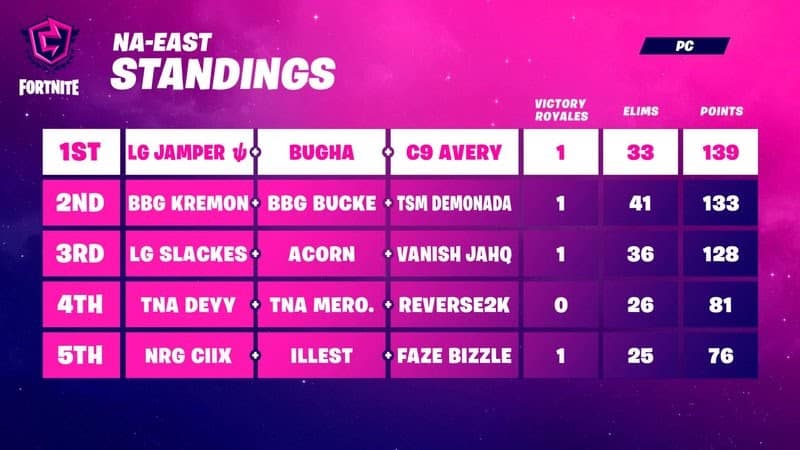 Ninja Battles Week Six Champions Acorn, Jahq and Slackes currently sit in third place with 128 points. Their game six Victory Royale catapulted them into championship contention, where they will remain heading into the final day of action. Semi-final winners Reverse2k, Mero and Deyy of Team New Age managed 84 points and are currently in fourth place. NRG Clix, FaZe Bizzle and illest round out the top five after six matches.

The first FNCS Qualifier came to a close with the NA West region. Arguably its best players – 100T Arkhram, NRG EpikWhale and 100T rehx – took a commanding 35-point lead. They earned two Victory Royales across the first six matches with 48 eliminations. Arkhram, rehx and EpikWhale finished no worse than tenth place in any of their games. Two teams remain close to the top.

XTRA Quinn, XTRA Short and TRNL Sly x Lxdes currently sit in second place with 117 points. 100T Falconer, TurtleTavern and 4DRStorm landed in third place with two Victory Royales, 36 eliminations and 114 points. All eyes will be on Arkhram, rehx and EpikWhale as they look to punch their tickets to stage two convincingly. Could anyone come back and snatch victory away from the leaders? Six more matches will determine that question.

The South America/Brazil region might have a problem on its hands in the form of Fortnite World Cup standout k1ng, Rustyk and Seeyun. These three effortlessly won all four of their matches on day one of the Grand Finals before the servers tapped out. As a result of the server issues, all eight of the remaining games will take place tomorrow. Could k1ng make a final push to join FaZe Clan and win all 12 games? Now that would be a sight to behold.

Tune into the final matches of this first FNCS Qualifier tomorrow to see which teams secure a spot in stage two. The official broadcast kicks off with the European region tomorrow at 1 PM EST.