Comprehensive results from week two of the FNCS Invitational.

Week two of the $2 million FNCS Invitational competition is in the books. All seven regions compete in a multitude of solo matches over the last two days of competition. The ultimate goal for each region’s 300 participants was to accumulate enough points over two days to make the top 80. As we inch closer to the FNCS Invitation Season Finals, we start to see players separate themselves from the pack. Thus far, we’ve seen some dominant performances out of the likes of Europe’s NRG benjyfishy and OCE’s RBK volx. Let’s not forget the mind-blowing controller play across every region.

20 Grand Final spots per region remain, and next weekend’s Reboot Round will decide the rest. For more information on the Reboot Round, see our previous article detailing the FNCS Invitational competition. Please refer to last weekend’s article for the full week one results.

We would also like to thank @KinchAnalytics on Twitter for a comprehensive list of cumulative points for each player. With all that said, let’s take a look at how each region played out in week two of the FNCS Invitational.

For the second straight week, NRG benjyfishy showed precisely why he is the best solo player in the world. In week two of the FNCS Invitation, Benjy racked up 371 points overall en route to victory. His outstanding performance included two Victory Royales and 49 eliminations in total. Through two weeks, benjyfishy is $65K USD richer, having won back-to-back weeks. He now turns his sights to the Season Finals, where he will look to add the $120K USD first prize money to his earnings.

The remaining top 30 features the absolute best that Europe has to offer. Wolfiez of Excel Esports and Kiryache of Virtus Pro rounded out top three with stellar performances in their own right. Also on this list are ATL LeTsHe, E11 TaySon, chapix 74, EG queasy, GODSENT snappy, mitr0, 100T MrSavage and FaZe Mongraal. The FNCS Invitation Season Finals for Europe will be an outstanding display of Fortnite, with many of these players seeking to add the Axe of Champions to their repertoire. 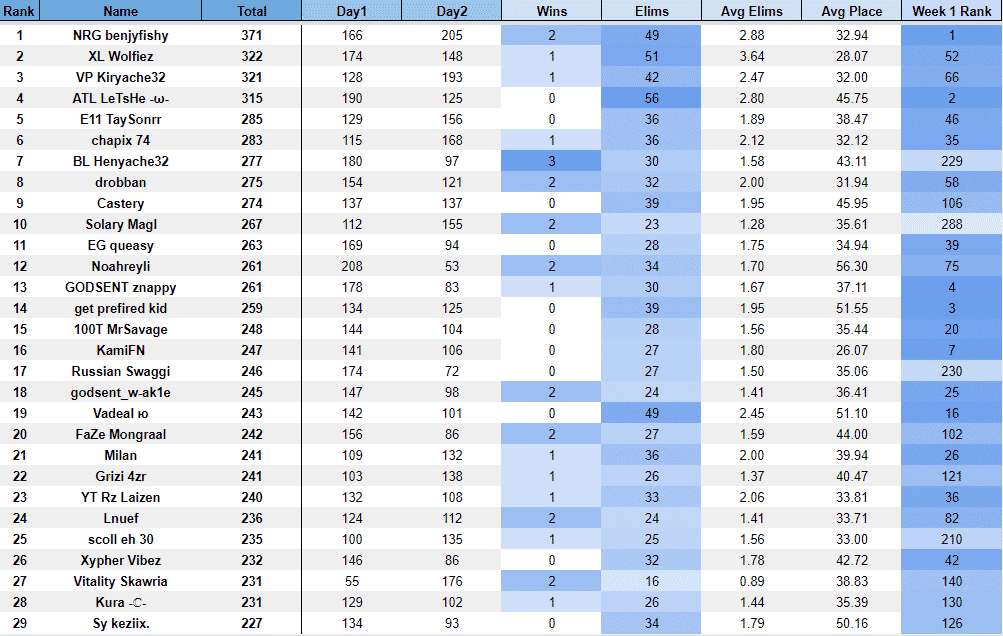 Notable Players Inside the Top 80

Controller players dominated week two of the FNCS Invitational for the NA East region. Four of the top five players use a controller input, including first place finisher sF Roller. He managed 43 eliminations in total. Roller took home $25K USD for his efforts in week two. Furious, Scoped and illest all use controllers as well. Each put up some astronomical numbers in this high-level competition.

Liquid STRETCH has emerged as an outstanding solo player. After finishing in third last week, Stretch is quickly ascending to “favorite” status in the NA East region. The top 80 players will move on to next weekend’s Season Finals. Hopefully, the leaderboard will be a bit more diverse in terms of player inputs. 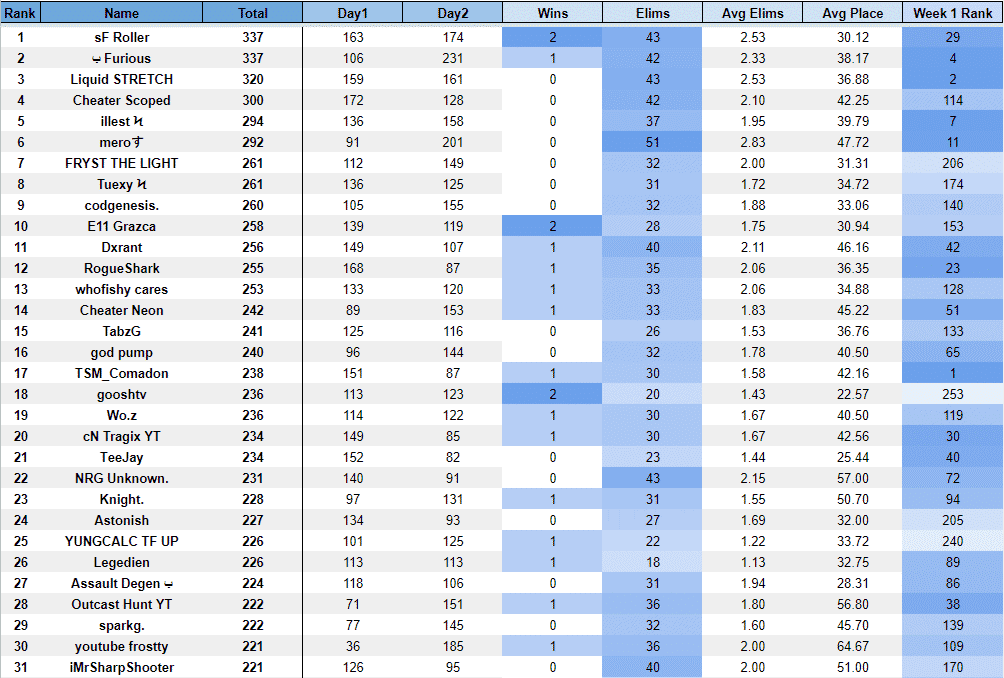 Notable Players Inside the Top 80

NRG EpikWhale continued his NA West dominance with yet another outstanding FNCS performance. He has indeed adapted to the controller lifestyle, collecting 50 eliminations and earning one Victory Royale. EpikWhale pocketed $10K after earning a sizable victory. He moves onto next weekend, where he will be seeking more of the same.

Another top controller player known as wavyjacob took second over two days of the FNCS Invitational. He, too, managed one Victory Royale but fell slightly short of first. As we move closer to the Season Finals, we know the power of a controller. We will have to see if this narrative remains the same. The top 80 have punched themselves a ticket to the finals. 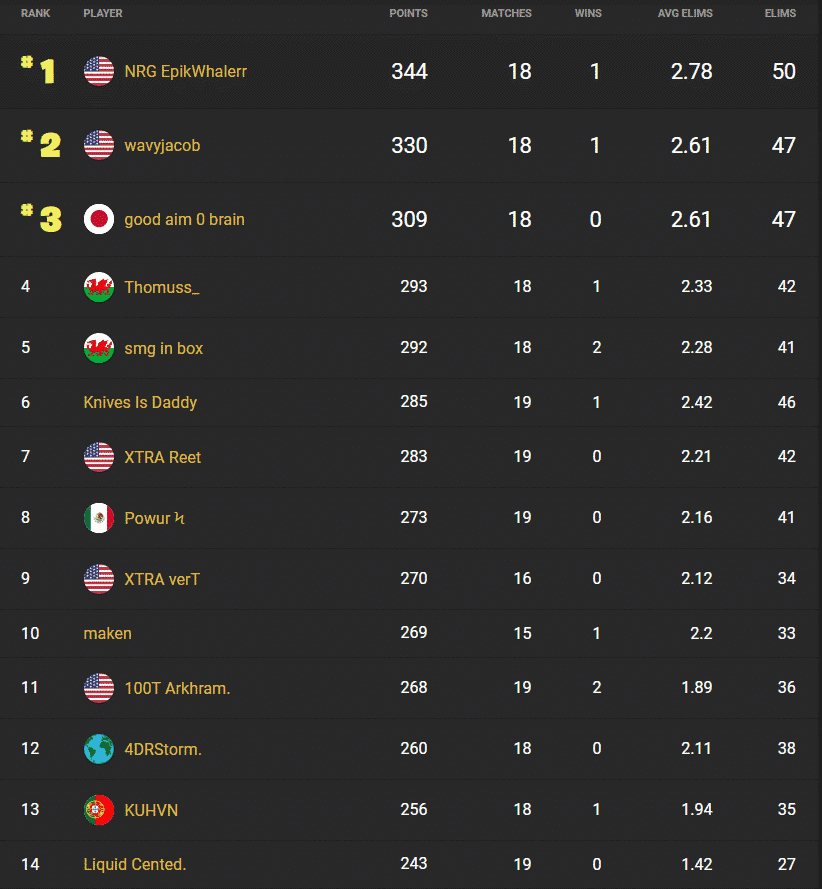 RBK volx pressed on the gas early on Saturday and never let up through two rounds of the FNCS Invitational. In week two, volx amassed an astounding 490 points, including three Victory Royales and 64 eliminations. He played a nearly perfect set of games across rounds one and two and after finished in second last week. Volx has brought his FNCS Invitational earnings up to $6.96K. There is much more to play for with Grand Finals occurring next weekend. He will look to continue this dominance and prove himself as the best solo OCE player.

The top 30 features a who’s who of Oceanic talent. Some noteworthy names include AO Summer Smash standout looter, RNG Jynx, Link, worthy, x2 Jordan and many others. Week two’s top 80 players have secured themselves a spot in the Grand Finals. Those who did not qualify will have a second chance to do so in the Reboot Round next weekend. 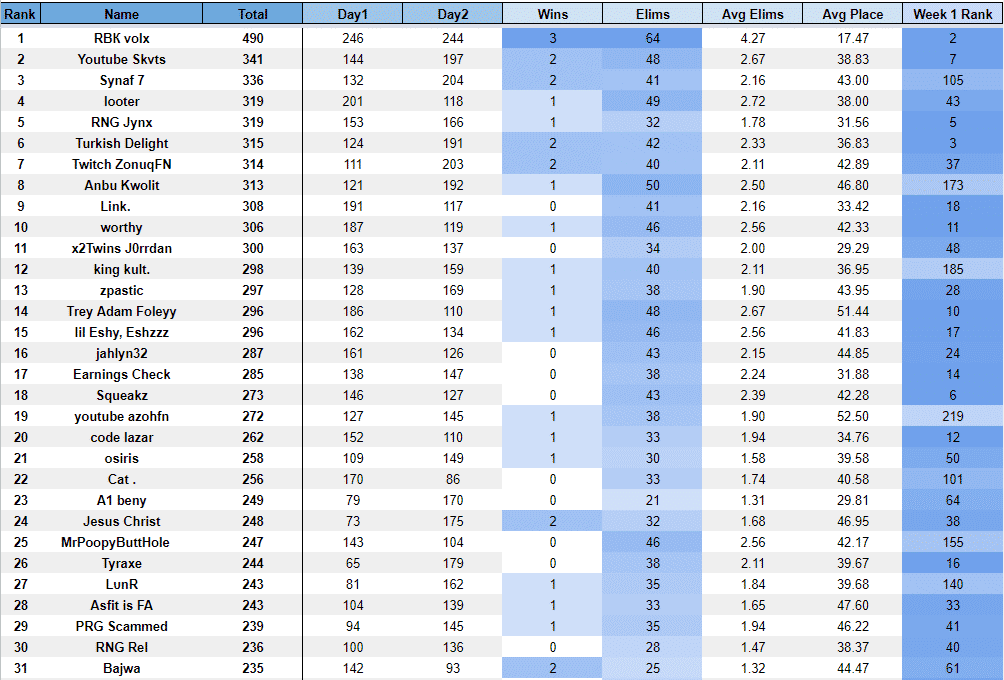 Frosty matched Europe’s benjyfishy and took his second straight FNCS Invitational Victory. He also managed to achieve the highest two-day point total with 494. Frosty’s three wins and 79 eliminations separated him from the pack. He has now won $13.5K with more up for grabs next weekend.

Fortnite World Cup standout King eclipsed 400 points and took second place in week two for Brazil. He led day two with 243 points and bounced back overall after a rough week one performance. Viewers will be able to see his slaying prowess in play at the Season Finals next weekend. 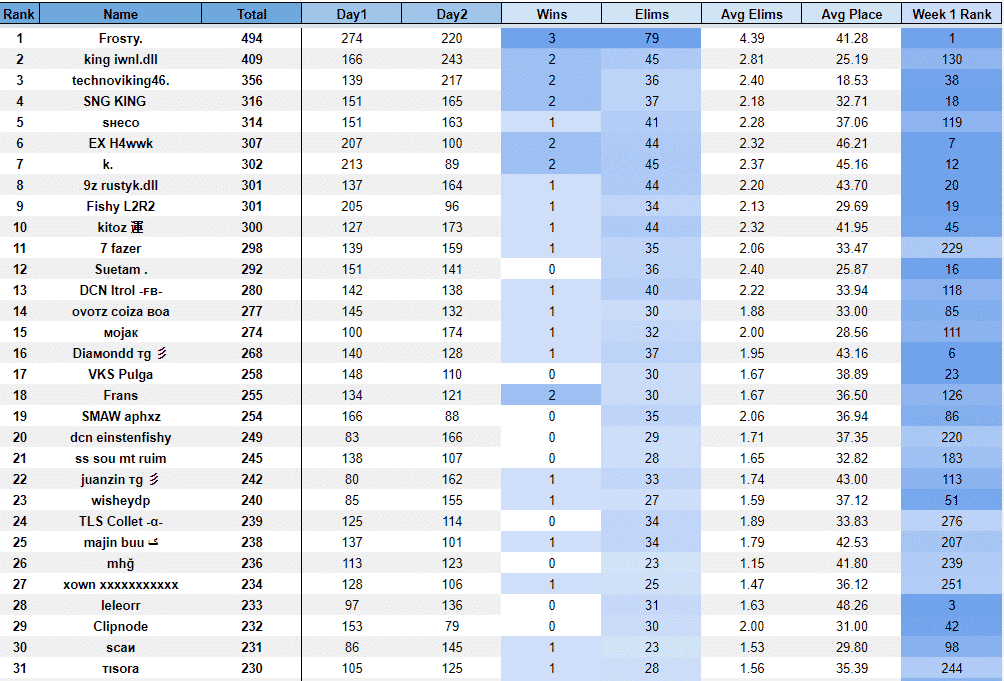 Qjac of the Crazy Raccoon esports organization triumphed over all Asia counter-parts in week two of the FNCS Invitational. He managed 392 points over two days with 49 eliminations. After a 48th place finish last week, qjac shined in week two, where he will make it through to the Grand Finals with an extra $6K USD in his pocket. The top 31 players below, along with 49 others, will compete for a $15K USD grand prize. 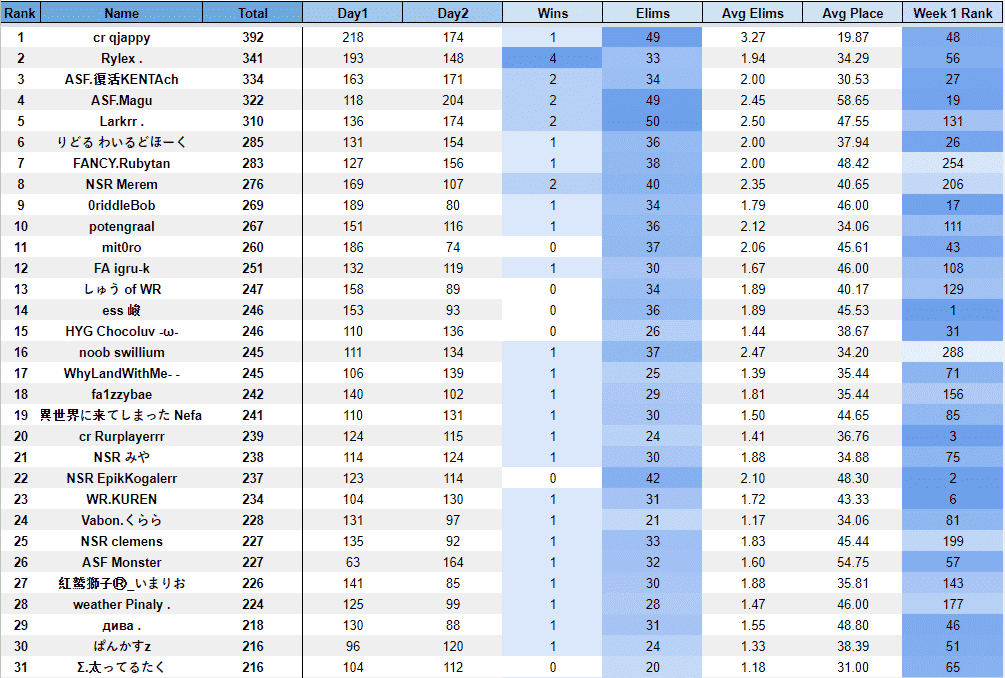 ASMR Tobi followed up a tenth-place finish in week one with a first-place finish in week two. He reached 362 points over two days with one Victory Royales and 54 eliminations. Tobi is amongst the favorites in the Middle East region. Others included in that favorites list include SAQE Njby, who took first place in week one as well as Souriano who is one of Middle East’s top dogs. 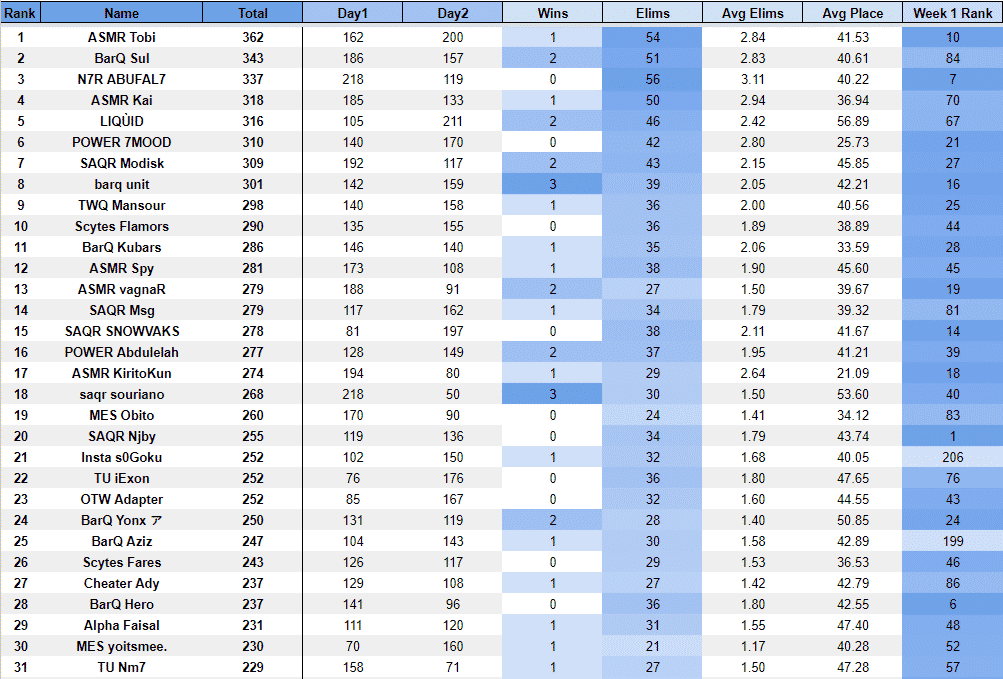 That concludes out week two coverage of the FNCS Invitational. Keep in mind; there will be a Reboot Round next weekend. In that round, players who did not make the top 80 in week two will have one more chance to qualify for the Grand Finals. Their goal is to make the top 20 in the Reboot Round, which will fill out the 100 finalists. Tune in next weekend for continued coverage of the $2M USD FNCS Invitational!