Fortnite players in the NA West, NA East and Europe regions competed in July and August for a combined $500K USD prize pool. Thus far, Arkhram of 100 Thieves and the unsponsored 4DRStorm claimed victory for the NA West region back in Chapter 2 – Season 3. NA East crowned Liquid STRETCH and OA Coop as its two DreamHack Online Open Champions. Polish player teeq and Slovenia’s k1nzell each took home the victory for the European region. The DreamHack Online Open tournament series will continue into December, which brings the total prize pool to $1.75 million.

A lot has changed in the last few weeks for competitive Fortnite. Characters from the Marvel Comics universe have invaded the map, and brought with them a variety of different abilities. Additionally, Epic Games re-added iconic weapons like the Pump Shotgun and Combat Shotgun. Oh, and let’s not forget that cars are now available to drive in competitive modes. The landscape of DreamHack’s September tournaments will be vastly different from the last two months. 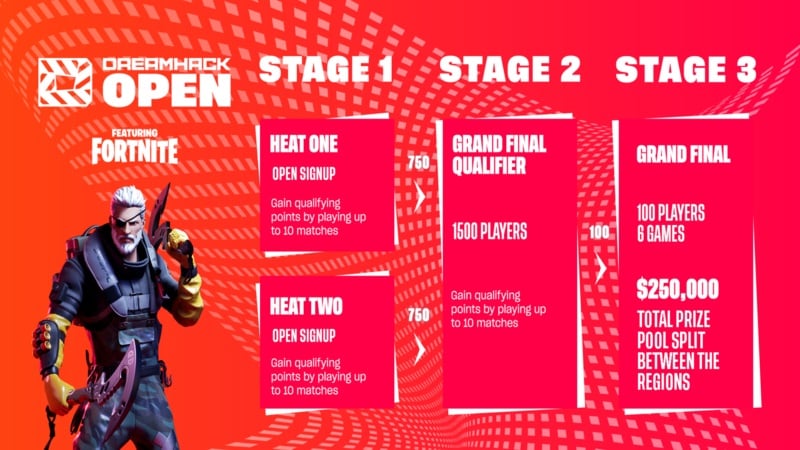 Like last month, DreamHack will stick with the solo two heat format for stage one of the tournament. Heats one and two are open to all players and will narrow from several thousand players to the top 750 per heat. Those who don’t qualify out of heat one will have the opportunity to compete in heat two. The top 1,500 players from heats will advance to stage two, also known as the Grand Final Qualifier. Only the top 100 players from stage two will reach the Grand Finals, where players in the NA East, NA West and European regions will battle for $250K USD. Each competition will occur over two days, with heats on day one followed by the semis and finals the next day.

DreamHack’s usual scoring system will remain in effect. Placement points begin at top-50 and will continue until the Victory Royale. Eliminations are worth five points each in this format. Expect to see player points exceed 300 atop the leaderboard for each region.

Like last month, NA West is up first for the September DreamHack Online Open tournament. NA East will follow after, and then Europe will round out the tournament series this month. Find the full schedule breakdown below, courtesy of DreamHack.

Remember, DreamHack Online Open featuring Fortnite is open to all players regardless of their Arena Mode rank. Sign-ups are available up until the competition goes live for each region. Visit this website to fill out the requisite form. DreamHack provides all of the instructions needed to register for the event, and there is no entry fee.

There’s no telling how the tournaments will play out in this new Chapter 2 – Season 4 meta, but it will be exciting to watch each region unfold. Stay tuned to ESTNN for more Fortnite news and updates!