The second DreamHack tournament of September took place on NA East servers. Players from Europe, NA East and NA West all took part, including World Champion Bugha, BL Anas, FaZe Bizzle, EP wavy and many others. All participants went in with the same goal, to walk away with the $10K USD grand prize. After two days of open qualifiers, semi-finals and finals, the NA East region crowned its third DreamHack Champion. Let’s see how the action played out for the top 100 players.

It was quite the grind for all 100 grand finalists for the NA East region. When all was said and done, seasonal Arena Mode hype leader Marzz_OW triumphed over Bugha. September’s NAE event offered one of the narrowest margins of victory, which came out to four points in the end. Marzz’s placement heavy approach and Victory Royale in match number four were crucial. Bugha did not take it easy on Marzz by any means. The Fortnite World Cup Champion took second place in the closing game of the tournament, which put him at 289 points.

Marzz_OW joins Coop and Liquid STRETCH as NA East DreamHack Champion in this brand new season of Fortnite. He earned $10K USD, proving himself one of the top solo players in the world. Bugha continued to impress with his runner-up finish and $5K USD, further displaying his stability in competitive Fortnite. European player BL Hen held the early lead in this tournament. The Lithuanian player finished in third overall, despite grappling with high ping.

The final placements offered a blend of Europe, NA East and NA West players. Some notable players to finish at the top include Outcast Mero, TSM MackWood, LG Jamper, OA Whofishy, LG Slackes and nanolite. NRG Unknown and FaZe Bizzle finished respectively in 21st and 22nd. Refer to the full scoreboard below for all 100 final placements. 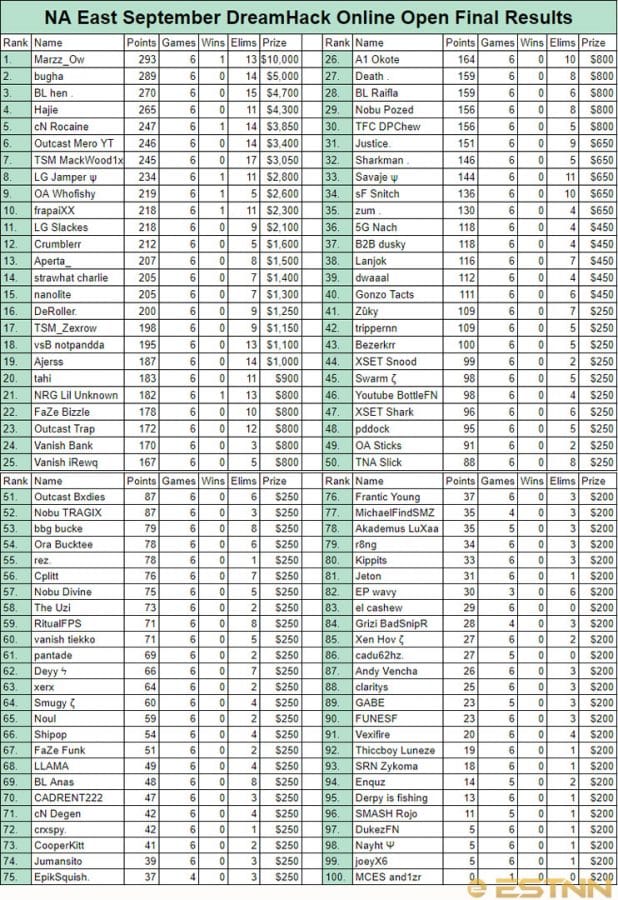 Congratulations to Marzz_OW for his consistent Arena dominance, and now a major Fortnite tournament win! The DreamHack competition will conclude this weekend with the European region.