A recent study revealed that players have spent over 10.4 million years playing Fortnite, which is nearly twice as long as humans have spent on the planet.

The gaming world changed forever after the release of Fortnite: Battle Royale on July 25, 2017. It’s hard to imagine that even developer Epic Games knew what they had in store with their unique approach to the trendy Battle Royale genre. Games like PlayerUnknown’s Battlegrounds and H1Z1: King of the Kill offered similar experiences to Fortnite. However, Fortnite’s building mechanics set it apart from every other game of its kind. Additionally, the Fortnite item shop, featuring character skins, gliders, harvesting tools and emotes revolutionized in-game purchases.

Fortnite: Battle Royale swept the entire world with its gameplay. Content creators like Tyler “Ninja” Blevins, Turner “Tfue” Tenney and Ali “Myth” Kabbani pioneered the Fortnite movement on Twitch. All three memorable figures and many others cashed in on Fortnite, leading to their success as internet personalities. Although Fortnite maintains its popularity today, not many games will come along and replicate the same impact. The UK publication GAME examined the numbers in Fortnite’s three-year existence and discovered that players had spent 10.4 million years cumulatively engaged in the popular Battle Royale title.

Fortnite by the Numbers 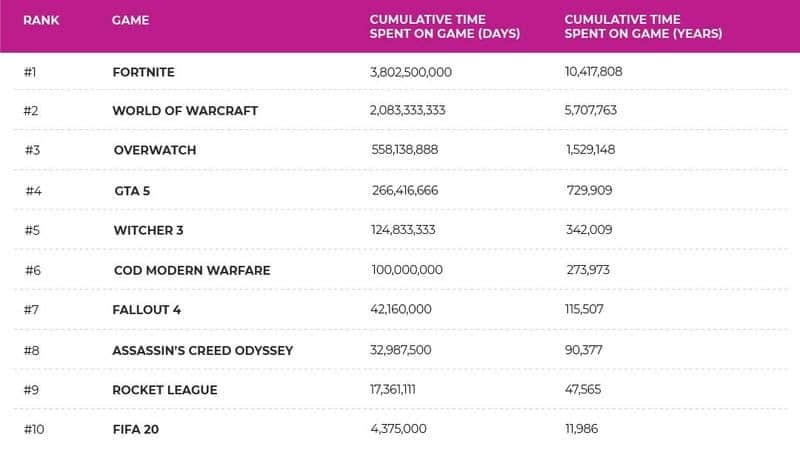 Since its release in 2017, Fortnite players have spent over 3 billion days, or 10.4 million years in-game. The formula used in this experiment is the total registered players and average playtime. These staggering numbers showcase the impact Fortnite had on the realm of gaming in such a short period. Ranking below Fortnite is a game like World of Warcraft (WoW), arguably the most popular massively multiplayer online game (MMO) of all time. For comparison, Blizzard Games released WoW in 2004 and players have spent 5.7 cumulative years in the game’s universe, based on a report in 2012.

Ranked respectively in third and fourth is Blizzard’s Overwatch and Rockstar’s Grand Theft Auto 5. The only other game perceived as a Battle Royale on this list is Call of Duty: Modern Warfare, which saw the release of Warzone on March 10, 2020. It quickly ascended the top as a Battle Royale title, giving Fortnite quite a run for its money. However, Fortnite made an impact on gaming culture as it stood in 2017. Although it may have declined slightly since the initial boom, Fortnite remains alive and well. 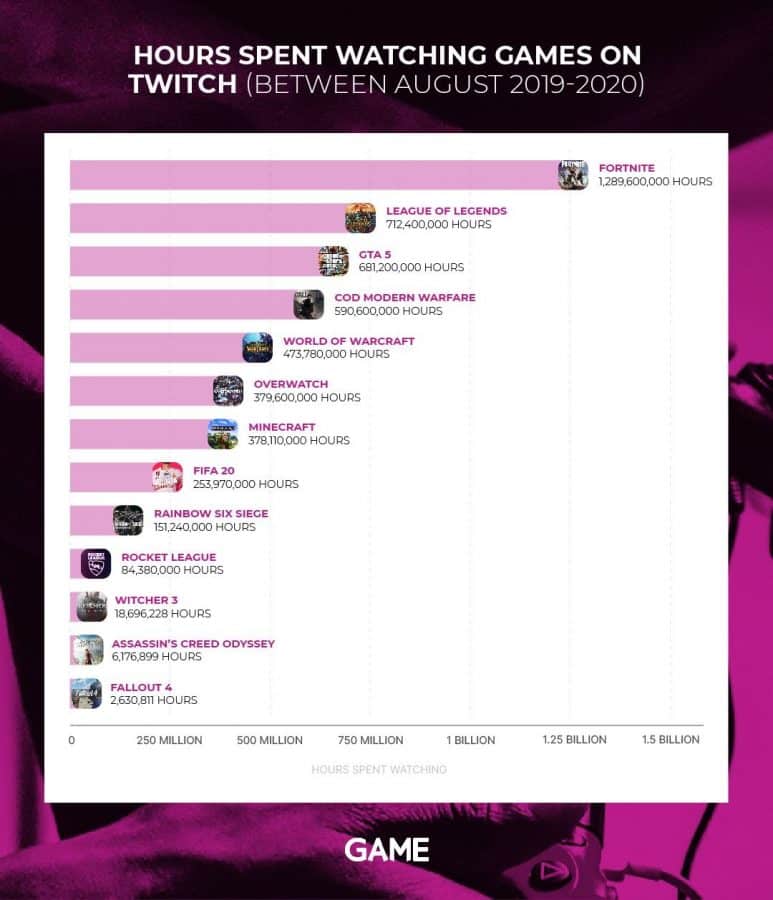 I recently mentioned the takeover of famous streaming personalities like Ninja, Tfue and Myth on the Twitch platform. These three streamers and many others helped shape Fortnite into an iconic game on a macro level. GAME pulled some interesting Twitch statistics ranging from August 2019 to August 2020. Fortnite clocked in at over 1.2 billion hours of view time, ahead of games like League of Legends, Grand Theft Auto 5 and Call of Duty: Modern Warfare. This statistic speaks to the reach of Fortnite on a global scale. It seems each region of the country possesses a popular streamer. Inside of the United States, streamers like Cody “Clix” Conrod and Kyle “Bugha” Giersdorf are some of the most recognizable names. Outside of the United States, there are streamers like Benjy “benjyfishy” Fish and Harley “Fresh” Campbell, respectively, from the United Kingdom and Australia.

Fortnite’s global reach led to it becoming one of the most popular and iconic games in history. Regardless of its current status, Epic Games produced a free-to-play Battle Royale experience that not many others have replicated. Over 10.4 million years spent playing a game even cumulatively is impressive, considering that it’s only been out for three years. It will be interesting to see if Fortnite has long-term staying power like World of Warcraft, League of Legends and Counter-Strike. Considering its recent partnership with Marvel Comics, Fortnite will stick around for quite a while.