DreamHack rounded out the month of September with the European region. Thousands of players competed in the open qualifiers, but only 100 would eventually reach the finals. The tournament’s home stretch featured some of the best players in the world, including NRG benjyfishy, Th0masHD, VP Kiryache32 and Na’Vi Putrick. Finalists had six games to accumulate the most points via placement and eliminations. Let’s see how the final DreamHack tournament of the month played out for the European region.

With Boogie Bombs gone from the competitive loot pool, European players had a more level playing field than usual. After six intense matches and an unfortunate tournament delay, Polish player teeq came out with his second DreamHack victory in three months. In the Grand Finals, teeq managed 20 eliminations en route to 260 points overall. The 17-year-old pulled ahead of GODSENT znappy and EP verox in the tournament’s closing moments with a clutch four-elimination 12th place finish. Some will remember teeq from July’s DreamHack performance, where he bested DreamHack Anaheim Champion 100T MrSavage in the Grand Finals to claim victory. The consistent Polish player displayed his skillset once again against some of the best European Fortnite players. He can now call himself a two-time DreamHack Champion and will walk away with another $16K USD. 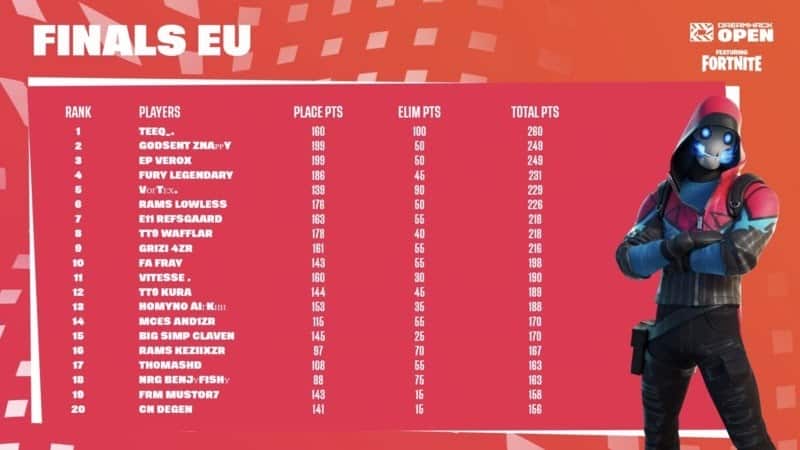 Second and third place respectively went to the previously mentioned GODSENT znappy and EP verox. Both players tied with 249 points, but the tiebreaker ultimately swung in favor of the Swedish player. Some other notable players that finished inside the top-15 include E11 Refsgaard, Grizi 4zr and FA Fray. Perrenial European contenders MCES Andilex, Th0masHD and NRG benjyfishy landed in 14th, 17th and 18th overall. NA East player CN Degen snagged himself a 20th place finish as well.

Although the tournament suffered a delay after some strangely bugged lobbies, players battled through. Most of the European players continued well past midnight to complete the competition. Top player benjyfishy produced arguably the most impressive clip of the tournament that took place in game five. The two-time World Cup finalist ran rampant, racking up multiple eliminations in less than one minute and thirty seconds. Benjy’s efforts in game five resulted in 12 eliminations in total and a seventh-place finish.

Teeq’s second DreamHack victory moves him significantly up the ranks. It’s safe to add the 17-year-old to the shortlist of elite players in Europe. At just 17-years-old, teeq has accomplished more than most competitive Fortnite players could only dream to replicate. We’ll have to see if he can continue this unprecedented run when DreamHack’s Online Open tournaments continue next month.