We’re taking a look at Garmin’s esports watch and seeing how it measures up!

Garmin recently debuted a new smartwatch made specifically for esports pros, streamers and gamers everywhere. Dubbed the Instinct Esports Edition, this watch has a ton of cool features to help people stay healthy. This means both mentally and physically since both are always important to stay on top of your game.

Our friends over at Garmin were generous enough to send over a review unit, and after a little while with it, we’ve compiled our thoughts about it. So if you’re on the fence about it, hopefully we can shed some light on it and if it’s a good fit for you!

The fit and navigation 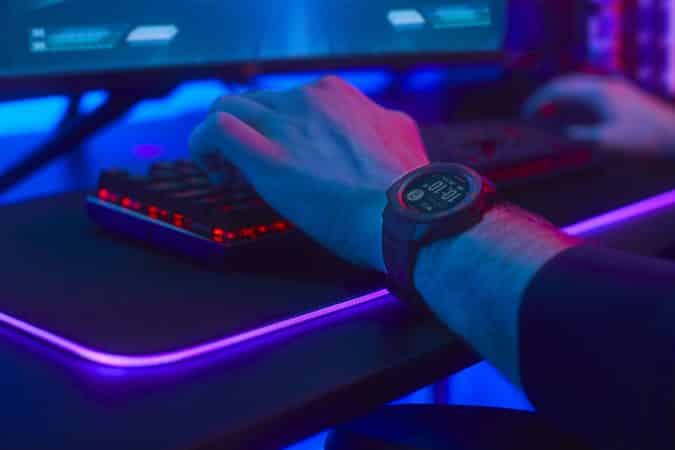 So, right out of the box, the watch is pretty cool looking. It’s bulkier than some others, so you feel it more, but it fits snugly on your wrist. But at the same time, it does take getting used to if you’re not used to wearing a watch or smaller variations. This is especially so with the sensor on the bottom. Along with that, the display is big so you never have a problem seeing what you need to see. So, though it is a bigger type of watch compared to ones like the Apple Watch, the way it fits on the wrist is ideal and the large display is quite nice.

Now, navigating through the different features on the watch is pretty simple too. There are labels for the buttons on the side that help you out, but it’s easy enough to memorize where things are. A couple of button clicks can bring you to any feature you want, from the main screen, to phone notifications, or even the gaming-specific features that will be talked about later on. There isn’t an overload of places to go and everything is where it should be, which is very welcome!

Finally, the Garmin Connect app is easy to navigate as well. The home screen has a lot on it and shows the data that you’ve transmitted through the watch to help keep track of trends. Not getting enough steps? You can see that there. Stressed out lately? You can see it there too. You can view your current status through the watch, of course, but if you’re trying to track long term trends to better your lifestyle, the app is great for helping you do so in easy-to-follow ways. 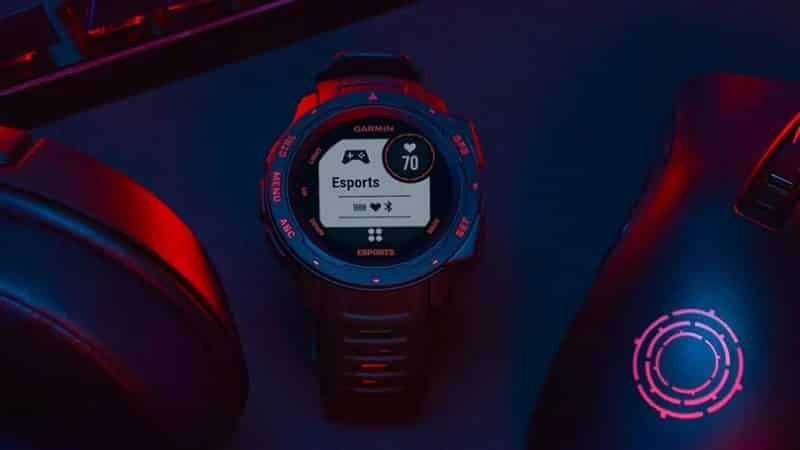 Moving onto the main draws of why this watch stands apart from others. There are two main things I absolutely love about the Instinct Esports Edition. The first is the primary esports feature, which tracks your heart rate and stress levels. Like any gamer, I’m prone to spending many, many stressful hours playing ranked games. Seeing as it’s almost the end of the 2020 League of Legends ranked season too, I decided to track a bunch of my games (both ranked and normal) to see what happens.

After about a week, I was able to see how much more stressed I was in ranked compared to screwing around in normals with friends. Obviously this is the case, but seeing it quantified put it into perspective for me that I, personally, stress myself out in the hyper-competitive environment. It has made me think more about ways I can stop tilting and keep a mental edge, by taking breaks and such.

The other great feature for me is the body battery monitor. Throughout the day, the watch has a display that you can turn on to see how much energy you have. Most of the time is pretty spot on too. Now, why is this cool? I, like many others, tend to stay up fairly late, thinking I’m not that tired yet. Well, it turns out that’s not always the case. Since I keep track of this, I see that I usually hit the point where I should go to bed around midnight, whereas I was staying up until 2 or 3 PM regularly. As a result, I started sticking to a better sleep schedule and has made me feel much better and more energized. Honestly, this probably wouldn’t have been a change I made if it weren’t for this watch.

Would I recommend it?

Finally, the part that really matters. Would I recommend the Garmin Instinct Esports Edition? Absolutely yes. The physical appearance of the watch is great and it’s easy to use. I’d recommend it to any gamer who has the money. Or for those who need ideas for a Christmas gift. As stereotypical as it is, a lot of people who play video games for long periods of time are unhealthy. With this smartwatch, people can take small steps to be mentally and physically healthy. Aside from the features described above, it has things like a step counter to show you how much (or little) movement you’re getting.

But the people I would most recommend this to are streamers. Video game/esports streaming can be bad for your body, especially for those who go at it for eight or more hours a day. This watch would help them, as it does anyone else, but has another neat feature. That’s STR3AMUP!, which is software that displays your body metrics on-stream for viewers to see. There are two cool things that come from this. First, if you’re a very competitive streamer, viewers can see, right there, the demands of high-level competitive play. Secondly, it’s fun. It’s easy to imagine a streamer showing this on their stream, dying to a boss for the 15th time (for example) and the chat emote spamming OMEGALUL and their stress level.

In the end, this is a great product. If you’re looking to set some New Year’s resolutions and be a bit healthier, this is a great step to do so, as seeing these metrics will open your eyes to things you didn’t consider much before. Even if you don’t want to go that far with it, its a generally cool looking watch with convenient features that other smartwatches have but with more.

The Instinct Esports Edition is $299.99 and available for purchase on Garmin’s website.