Looking for the ADC that’s right for you? Have a look at our tier list.

ADCs are the crux of the bottom lane and an extremely important role in League of Legends. They have access to very high damage and regular help from their supports. But, of course, some are bound to be better than others. This tier list is focused on creating a standard tier list for general play. 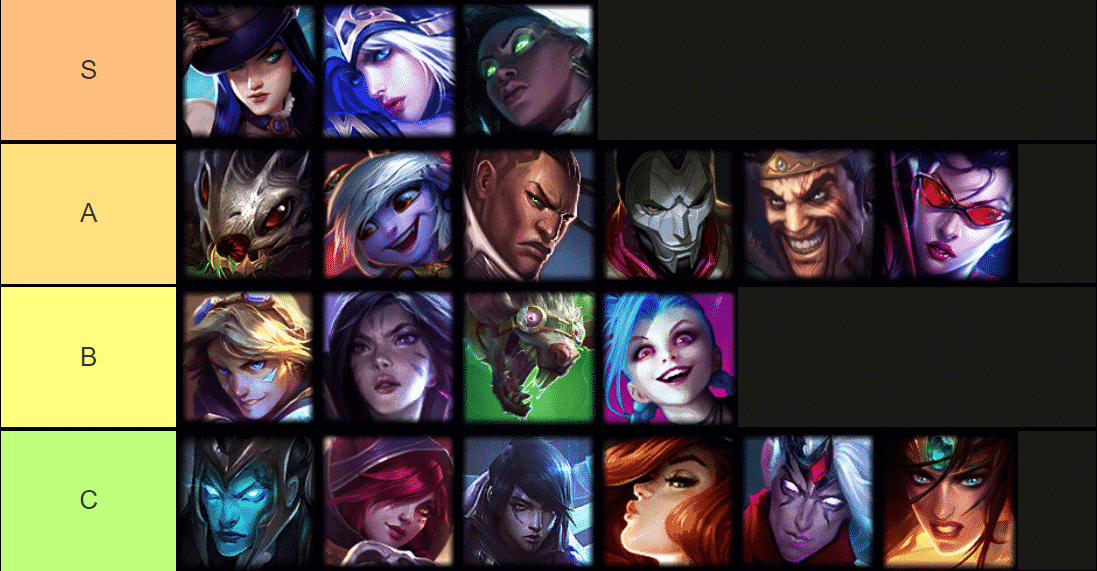 These champions dictate Bottom Lane with no exception, they have the most impact when deciding the outcome of the game. These picks have long-range and high utility allowing them to have agency despite being an ADC. Pick these champions for the easiest route for climbing.

Caitlyn & Ashe: The two straight forward, classic ADCs providing you with long-range and consistency, Caitlyn the sheriff of bot and Ashe the queen of bot. Caitlyn is the perfect pick if you’re looking for a mechanical champion that rewards you for learning the intricacies of their kit.  On the other hand, Ashe is the champion if you’re looking to bring utility to the table and control the game pace with your own two hands.

Senna: The latest edition to the top tier ADCs, Senna plays a bit different than the rest. A much less conventional ADC, Senna is a solid pick if you’re looking for less auto-attack based gameplay and want to have fun with skill shots while playing a unique playstyle.

These champions fill different niches while still being highly viable

Tristana, Lucian & Draven – High kill pressure champions that can take control of a game in their own two hands. These champions are great if you’re looking for a mechanical challenge while also being rewarded as you learn the champion’s intricacies.

Jhin – The only utility ADC of the A tier, Jhin does great into all the other highly viable ADCs while also bringing his own ammo ADC playstyle to the table. Pick Jhin if you’re looking to bring utility to the table while kiting around fights at mach speed.

Vayne & Kog’maw – Did someone say hyperscaling? These two champions of the A-tier are true hyper carries that will take over the game at two to three items. Pick Kog’maw if you want pure damage and a conventional kiting ADC, play Vayne if you’re looking to make a montage.

These champions can work, but take a lot of effort.

Ezreal & Kai’sa: These two champions bring a whole new definition to the word outplay, if you’re feeling like you have insane mechanics don’t be afraid to pick these two champions up. However, keep in mind they do struggle in head to head matchups vs the S tier champions.

Twitch & Jinx: The hyper carries of the B Tier, they might not pack as big of a punch as the other hyper carries because they take longer to ramp up, but they do the job all the same once they get going. Twitch is great if you want to abuse stealth and get creative with how you approach fights and Jinx can help you get excited in team fights once you get a Runaan’s to blow the enemy team away.

These champions are greatly weaker than their counterparts or are only good situationally.

Kalista & Xayah – These champions can work well if you want to have a duo queue that’s looking to play aggressive. Play Kalista if you can duo with an aggressive support that plays Leona, Blitz or Thresh. Play Xayah if you can find a partner who plays Rakan for the lovers’ duo bot lane.

Aphelios – A fun champion that has a unique kit, however, after many nerfs this season, he longer dishes out the damage he once did. Aphelios is a great champion for pushing the limits, but no longer rewards you for learning the champion to its fullest potential.

Miss Fortune – A large AOE ult and a relatively simple kit, a good champion to have as a secondary ADC. Miss Fortune was the queen of Season 9, but after constant nerfs and overuse in competitive play, she now resides in the C tier of ADCs.

Varus & Sivir – The two utility champions of the C Tier, they can work situationally, but are currently outclassed in Season 10 where the stronger utility ADCs are at the top of the list. Play Sivir if you’re looking to have a reliable way to avoid important skill shots with your Spellshield. Play Varus if you are looking to have a safe early pick that also provides mixed damage with his on-hit build.