After weeks of intense competition, the League of Legends World Championship has reached the Quarterfinal stage. Eight teams stand above the rest and now must duke it out best-of-five series to advance. One of the matchups of this stage is between Damwon Gaming and G2 Esports. These two teams have performed to an extremely high level and have aspirations at hoisting the trophy. Unfortunately, only one will have that chance. This is one of the most anticipated matchups in the Quarterfinals and will definitely be a treat to watch! 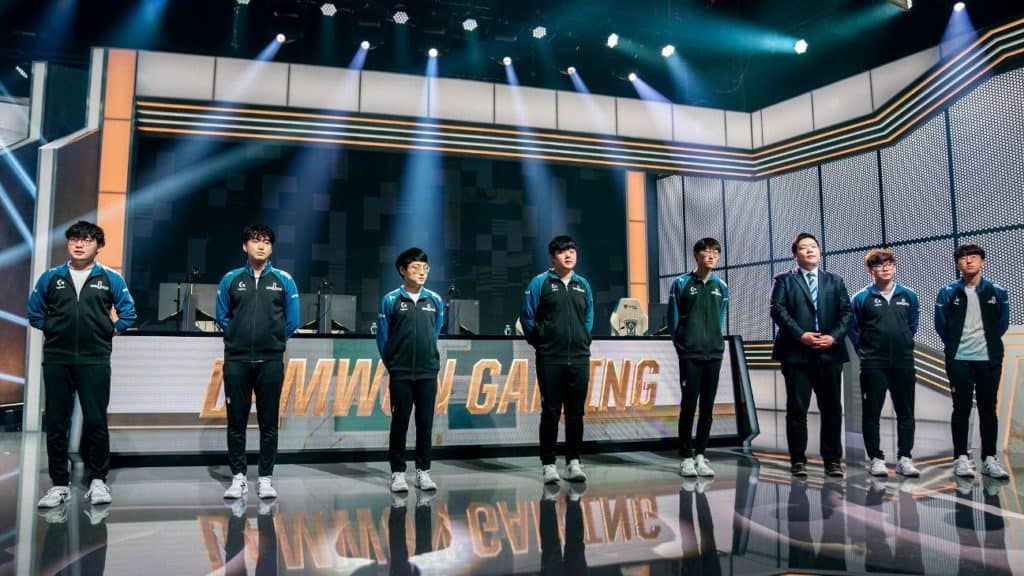 Damwon Gaming is the first seed from Group D. They’ve played through the entire Play-Ins and Group Stage to make it to this point and have smashed the competition. This is one of the most impressive teams in the tournament, as they’ve risen from the Korean Challenger scene all the way here in a single season. It’s no surprise then that this team has incredible superstar talent.

The two main superstars on this team are without a doubt Nuguri and ShowMaker. They’re the two solo laners for the team that are eager to make names for themselves. With the performances they’ve shown thus far, that’s an easy thing to do.

Nuguri a top laner known for his signature champion, Vladimir, and is an innovator for that champion. But he has a wide array of scaling top lane champions that make him a menace to face in team fights. His laning phase can be exploitable, but if given time and resources, he’s going to carry the game.

On the other hand, ShowMaker is a mid laner all about the early game snowball. He prefers assassin picks like Akali, LeBlanc and Qiyana, but is also reliable on more scaling picks too. ShowMaker has great synergy with his jungler, Canyon, and can absolutely take over a game.

The focus of their games is typically about these solo laners, but recently they’ve shown they can play through Nuclear, their ADC, too. Nuclear is often pointed to as the weak point of the team. Although he’s not a powerhouse player, with enough resources he’s demonstrated he’s capable of performing well.

Damwon’s current form is terrifying. With all the team’s members stepping up, there’s a chance this team has what it takes to make it to the Finals if they can defeat G2 here.

But G2 isn’t a team to go down without a fight. They’re looking to end their so-far perfect season by hoisting the Summoner’s Cup and winning every possible tournament. As the reigning MSI champions, G2 has demonstrated that they have what it takes to succeed on the international stage. During the Group Stage, G2 nearly went 6-0 but lost two games to Team Griffin, forcing them to the second seed.

This is something that G2 isn’t happy with and is sure to be firing on all cylinders in their series versus Damwon. G2 has an extremely high skill ceiling that we’re not even sure we’ve seen yet, which is striking considering their fantastic MSI form. This squad is bursting with individual talent and has a strategy that is difficult to overcome.

Perhaps their biggest two names are Caps and Perkz. Caps, who played on the Fnatic roster that made it to the Worlds Finals, is a huge force in the mid lane. He can play anything his team needs him to and has an uncanny ability to solo carry games.

Perkz is G2’s ADC player now, and though he was a mid laner in the past, his skills are top-tier. Many discounted Perkz as an ADC due to his lack of experience, but that doesn’t matter to him. He can play any ADC to the highest level and has some unique mage picks that give him a distinct edge.

G2’s main strategy is to play fast and loose. They rely on skirmishing and early game rotations to carve out a lead. This is volatile at times, but if their opponents can’t keep up, it is terribly deadly.

This G2 squad is looking to complete the perfect season run. Anything less than Finals will be a disappointment for them. Overall, this will probably be the most exciting series to watch. Both of these teams have great individual talents that will be looking to swing the game in their favor single-handedly. There’s bound to be unique picks and strategies that arise from it as well.

Damwon’s main focus for these games should be to enable the solo laners while keeping the G2 jungler Jankos down. Jankos has had some rough games this tournament and if Damwon makes sure he can’t have a strong early game impact, it becomes much easier for Nuguri to scale and ShowMaker to affect the rest of the map. If the solo laners can run rampant G2 will be hard-pressed to recover.

On the other side, G2 should try to focus on getting advantageous matchups for their solo laners and punish the bottom lane. If Wunder and Caps are set up to succeed, there’s less volatility that can come from those lanes. In addition, if G2 can break open the bottom lane, Perkz is a reliable carry that will certainly outshine Nuclear. As mentioned earlier, Nuclear is the weak point of Damwon Gaming and G2 should recognize that easily.

Interestingly, G2 players said in an interview that their scrims against Damwon were rough and they’d prefer not to play against them. This is worrying for European fans, but they shouldn’t consider it a done deal. They’re certainly able to take this series.

That said, this series is more likely to be won by Damwon. The peaks Korean teams have shown are higher than any other region in the world and Damwon is no exception. G2’s back-to-back losses to Griffin have shaken many people’s confidence in them while Damwon has continuously surpassed expectations. It’ll be close, but the most likely outcome is Damwon 3-2.

Watch the 2019 World Championship here at ESTNN TV. For more information on the tournament, teams, standings, and players, visit www.lolesports.com. Stay tuned here at ESTNN and follow us on Twitter and Facebook for more League of Legends news, articles, opinions and more.