100 Thieves and Evil Geniuses took to the Rift to keep their playoff hopes alive.

The LCS playoffs are one week down, with TSM losing their first series to Golden Guardians but staying in it with a convincing win over Dignitas. Afterward, Evil Geniuses (“EG”) had to play against 100 Thieves (“100T”) tonight to find redemption after a close loss to FlyQuest. The first game of the series wasn’t a super exciting one, but one EG fans can be happy with. That’s because they put on a clinic and crushed 100T. Despite 100T losing, Contractz had a fantastic opening 10 minutes. He took the first dragon and Rift Herald by nine minutes. Right after Herald, he went top with Ryoma to dive EG’s Huni and kill him for First Blood. But that momentum soon ground to a halt. At 13 minutes, both teams met at the second dragon, but EG came up with a three-for-zero team fight win and the Cloud Dragon itself.

EG acquired full control of the game after this. The swole bros of Svenskeren and Goldenglue in particular put on impressive performances, finding picks on members like Ryoma and Poome at critical points. In the midst of finding these kills, EG was vigilantly taking objectives like towers and dragons. In fact, by 23 minutes, EG was all set up for Soul point. The one thing that 100T did have going for them was Ssumday in the side lane. He was able to exert pressure and even take an Inhibitor tower by himself.

At 28 minutes, EG tried to get Soul, but Contractz stole it away. Unfortunately, two from 100T had to give their lives for it. A minute later, Poome was caught out and gave up another kill. After all this, EG took an easy Baron. They then reset, then began to push mid. EG smashed the middle Inhibitor with no resistance, then Poome was picked off yet again. To make matters worse, multiple 100T members were baited to try and help him, which led to their deaths. With this, it was simple for EG to push and take the first Nexus of the series. 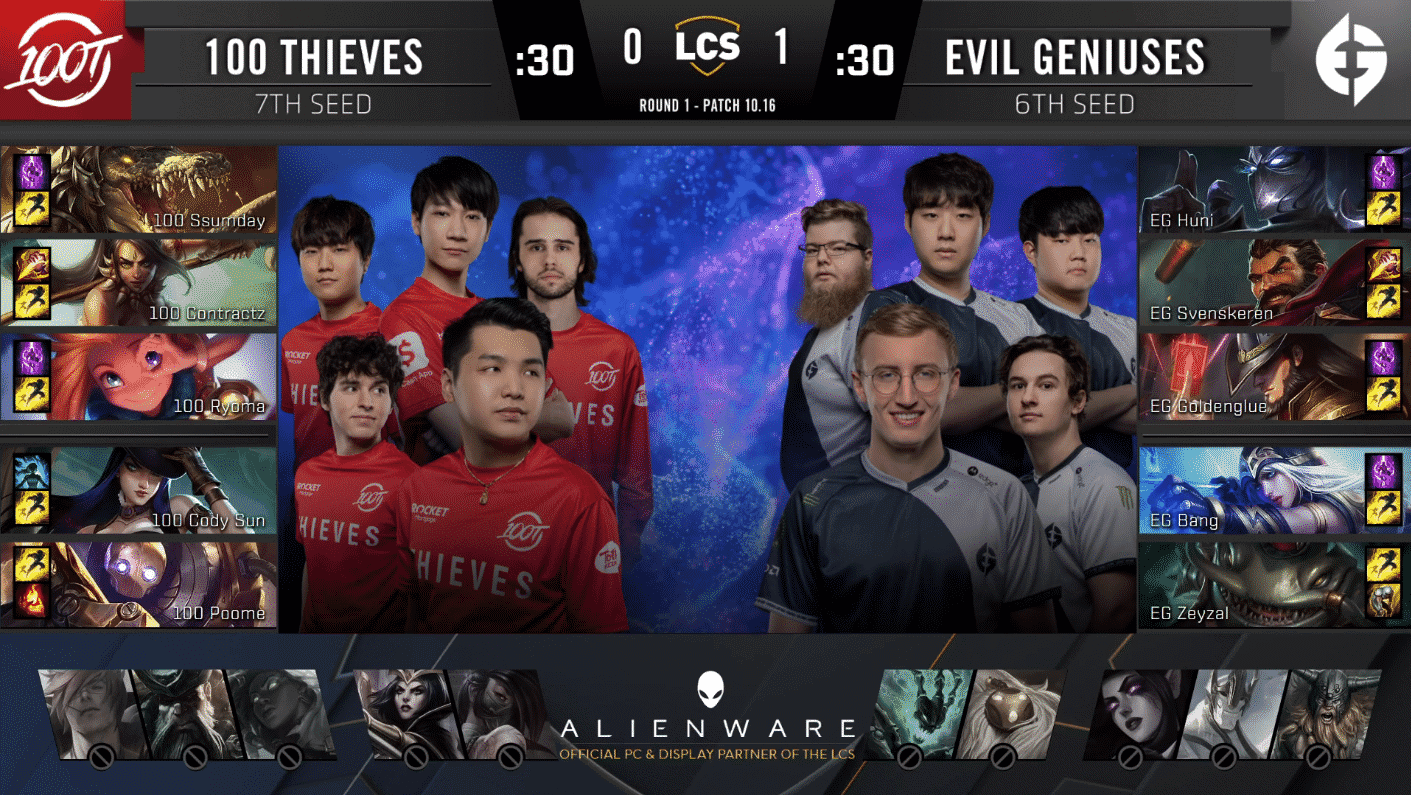 Game two was quite a back and forth one, with both teams having fair shots at taking it. It started off incredibly well for EG, as a level one 5v5 erupted in the top river, where Svenskeren secured First Blood. But 100T hit back at five minutes when they three-man dove Huni again. After this, EG took control back with a bot lane team fight victory, Herald take, a pick onto Poome and the First Tower bonus top.

From here, EG had the lead for sure. They were winning every fight and pushing 100T to the brink. The saving grace for 100T was that they were able to accumulate dragons, and at 33 minutes, 100T managed to sneak away the Ocean Soul for themselves. As a result, EG pushed their map lead further with two kills and multiple towers, but the permanent buff was definitely important for 100T.

At 38 minutes, Elder Dragon spawned. As they had the lead, EG headed their first and burned it down quickly. But, at the last second, Ssumday’s Renekton Teleported into the dragon pit and stole the uber buff away! After the hero play, 100T killed every EG member and took a Baron too. 100T promptly pushed mid to take the Inhibitor, then tried to stay and pressure. Ryoma made a greedy positioning mistake and lost his life for it, which gave EG the foothold back in. This mistake threw away 100T’s newfound lead instantly. EG claimed control quickly, then at 46 minutes, secured the Elder Dragon. It was simple for them to win one last fight then destroy 100T’s Nexus. 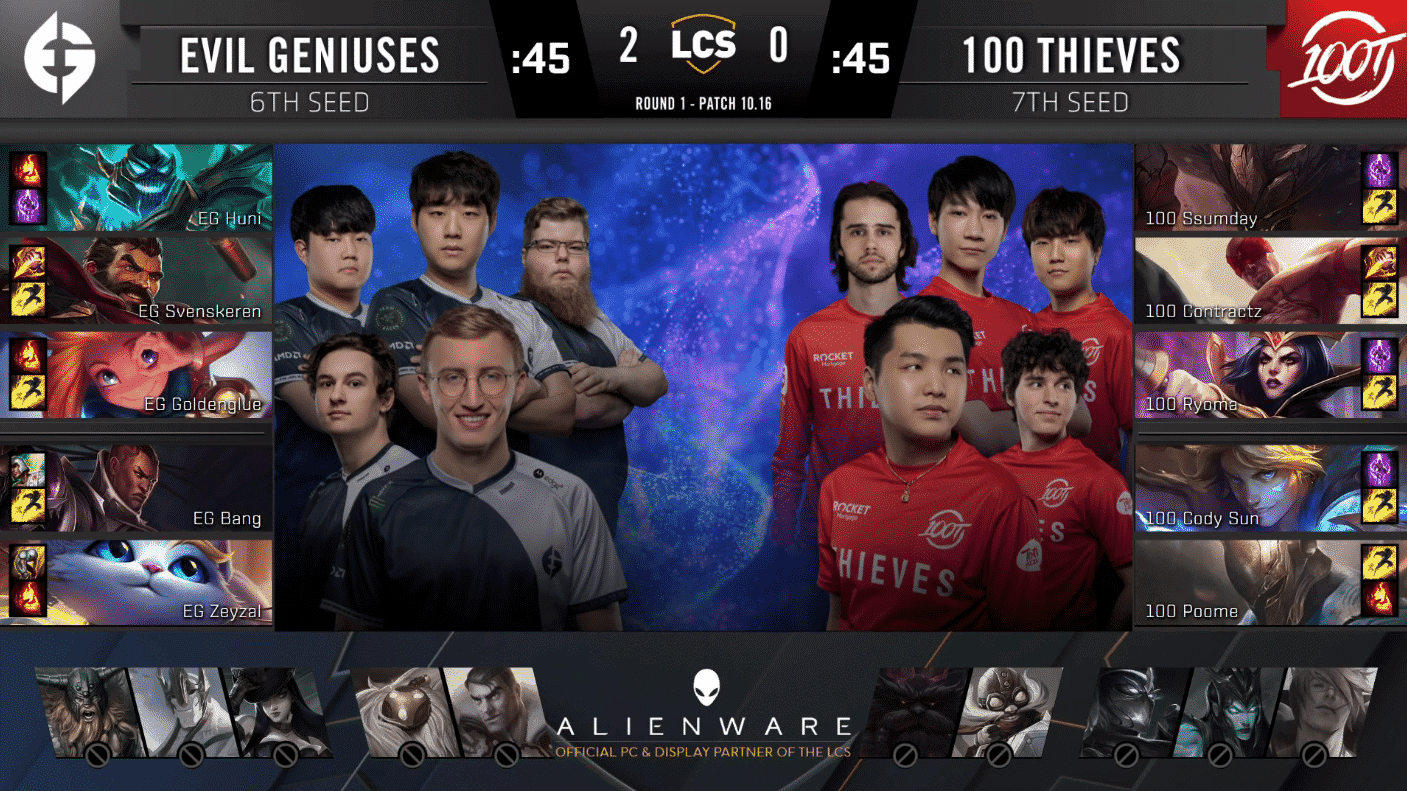 Game two was a bit of a tough one, but game three was nothing for EG. As they have nearly the entire series, EG ran on a clinic on 100T and knocked them right out of playoffs. EG was in control from minute one, first taking a Mountain Dragon at seven minutes before turning for a team fight, which they won three-for-two. A few minutes later, EG went back to the same spot, picked up another kill and another dragon.

Contractz did try to get something started for 100T by solo killing Svenskeren, but Huni and Goldenglue collapsed on his team to win the skirmish two-for-one. But EG kept up the pressure, killing Poone for the millionth time this series before taking Herald and dropping it mid. On this push, EG secured not only two towers, but two kills too. 100T once again tried to make something happen, by setting up a dragon, but EG stole it away from them.

The final nail in the coffin was hammered in at 20 minutes. Here, EG picked off two from 100T in the top lane. From there, EG went to Baron and secured it, picking up two kills afterward from 100T throwing themselves at them. Off the back of this, EG destroyed a middle Inhibitor. A minute later, a team fight broke out in the bottom lane where, unsurprisingly, EG walked away with multiple kills. With too few 100T members alive to defend, EG finished off 100T’s third and final Nexus of the year shortly after.