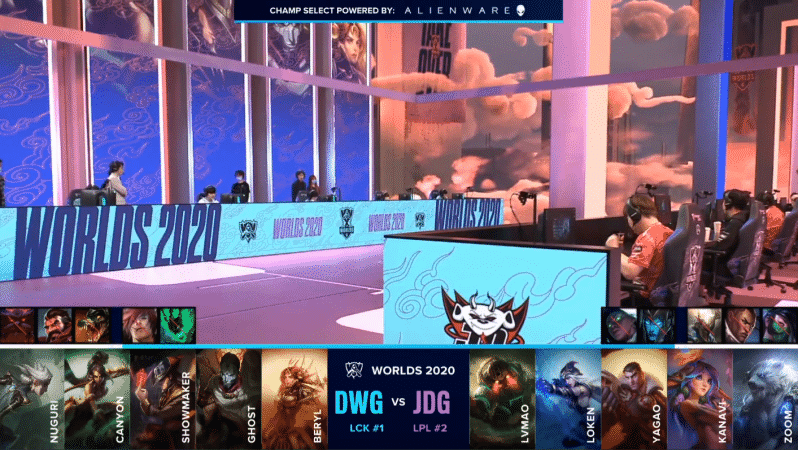 Just when we thought we’d get a relatively close match, Damwon Gaming (“DWG”) asserted complete dominance over JD Gaming (“JDG”) and the entirety of Group B with an immaculate Worlds debut. It started at level one where, funnily enough, JDG invaded DWG’s jungle. But DWG was more prepared and had their top laner Nuguri there, so JDG was in a 4v5 and practically gifted First Blood to Ghost. Then, at four minutes, a skirmish broke out bot. Though it went two-for-two, Ghost ended up with a terrifying 3/0 KDA.

Unfortunately for JDG, Ghost wasn’t their only problem though. The entire DWG squad was constantly on the prowl, searching for kills around the map. In addition to getting a couple of kills, DWG also slew two dragons, a Herald and secured the First Tower bonus by 15 minutes. After the 15-minute mark, DWG kept up the tempo, with their solo laners diving and killing Zoom while Canyon solo killed Yagao top.

The game was quickly slipping farther and farther away from JDG. This was especially true after DWG obliterated them five-for-one in a team fight in the top river, which led to an obvious DWG Baron. Another fight occurred about a minute later, this time in the bot river. It resulted in five more kills and a mid Inhibitor. Next up on the menu for DWG was a nice Mountain Soul before moving into the JDG base to force one final fight. All five JDG members fell here and could only watch with grey screens as DWG demolished their Nexus.