EU and NA kicked off the seventh day of the Group Stage with an important match. 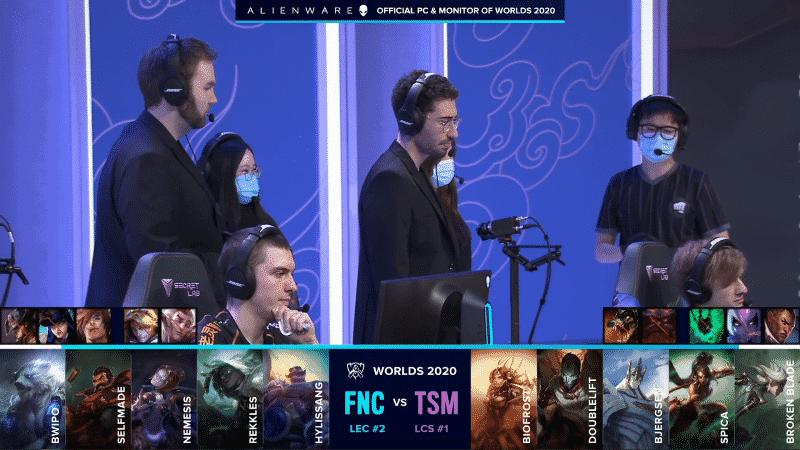 While the First Blood doesn’t drop, a fight went down in the bot lane which saw both junglers and mid lane enter the fight. TSM made the engagement but with Selfmade joining the fight Bjergsen had to escape, costing him a flash but saving his life. FNC was able to pick up two drakes and a 1k lead by the 11th minute. FNC finally picked up the First Blood catching out Biofrost as he leaves the river. But TSM is able to pick up a kill in return onto Bwipo, they also get yet another as FNC tries to punish.

A 5v5 breaks out over the third drake, with TSM going for the drake FNC move to take out Broken Blade instead, with him dead TSM looked to secure the kill but Selfmade is able to steal it as they go 3k ahead and claim the soul point. On the back end of the fight, TSM dropped the Rift Herald mid lane. However, FNC dove them in the top lane, picking up two more kills. TSM pulled the trigger on the mid lane fight with the soul drake spawning in just a minute. FNC dominate the fight and take down three members of the TSM with Ocean Soul now on the map. As a result, they took the Ocean Soul during the fight in the pit as they ace TSM and look to end the game at the 23rd minute.

FNC used the pressure to take a free Baron Buff as their lead nears 10k. FNC continued to push their lead down the mid lane, picking up two more kills and the mid lane inhibitor to boot. With TSM respawning FNC didn’t relent as they continued to push down the base and take the nexus. With that, FNC moved to 3-1 and TSM went to 0-4 and is eliminated from advancing any further in Worlds 2020.