In typical Worlds fashion, the match between Gen.G and Fnatic meant everything for Group C’s seeding. 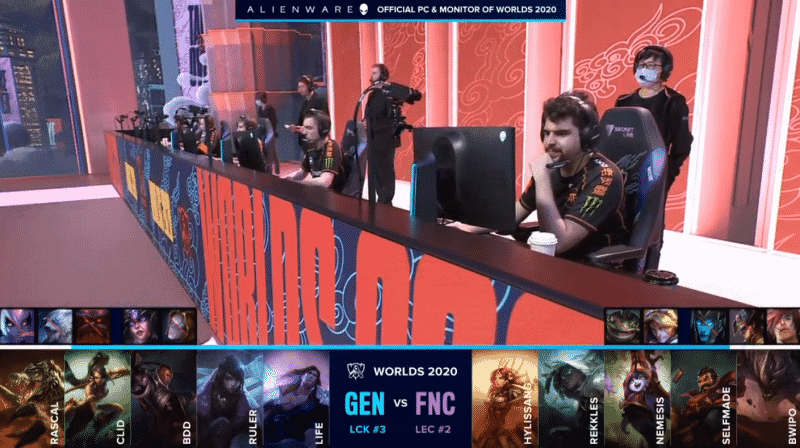 The final game of the day would be the first and second seed decider. With Gen.G and FNC matching each other up until this point, the winner would leave the group as the first seed. Despite a 2-0 day for both sides, FNC went into the match as the more dominant team. Gen.G showed some weakness against LGD, while FNC looking dominant across their games.

FNC’s comp gets off to a perfect start after Graves is able to pick up a kill in the mid lane. Gen.G manages to get a kill back on the top side, however, but Nemesis TP’s top to re-secure the kill. The early game madness continued as Gen.G pick up even more kills on the top and bot sides as they go 1.5k ahead.

The game continued to go Gen.G’s way, with the second Rift Herald now knocking down the FNC inhibitor turret. FNC’s comp just isn’t even able to come online with Gen.G picking up constant kills across the map as they moved 9k ahead. Gen.G started the Baron, and they’re able to claim the buff before FNC is able to react. The ensuing fight sees Gen.G pick up the early kill, with FNC unable to do enough damage in the pit to take down any member of Gen.G as they flee the battle towards their base. Gen.G finally re-engages and it’s too much for FNC who lose four members as Gen.G reset and pushed the top lane for the win.

They took down the base uncontested as they claimed one of the fastest victories at Worlds 2020 and secured their spot as first seed out of Group C.