With the Group Stage over, we turn our attention to the Knockout Stage of Worlds 2020.

With just eight sides left at Worlds 2020, we finally have an idea of how each of them looks as we head into the crucial best-of-five Knockout Stage. Below, we’ll briefly highlight the matchups and what each team can expect. With just two Western sides left at Worlds, the LEC sides that remain have it all to do if they want to keep Western hopes alive. 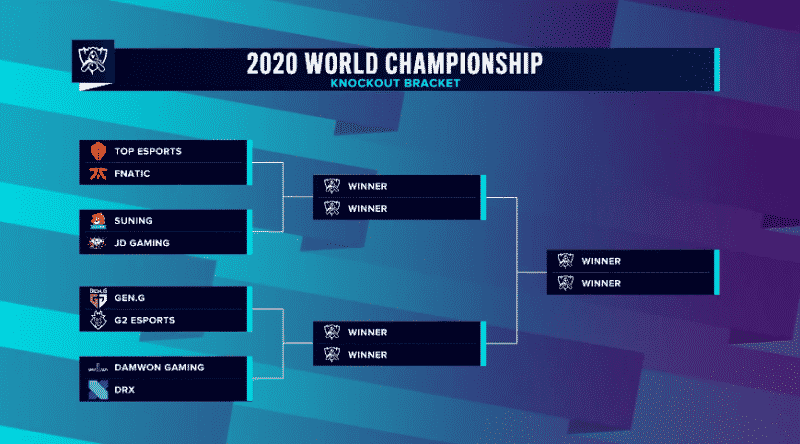 Suning might have surprised some when they topped their group with G2, especially after they lost a close best-of-one against them on opening week. They showed real grit when the sides met again the group as they took a 2-1 record over G2 due to a tiebreaker victory.

JDG comes out of Groups as the second seed, they did, however, take down DAMWON in a game which will give them hope going forward. Obviously, facing off against a first seed is never ideal but best-of-fives always bring out a different beast with teams, especially as series bans start to appear and teams start to deploy tactics throughout the series.

Despite an upset loss to FlyQuest, TES almost had a perfect run in their group. The LPL side will be a scary opposition for anyone that faces them, however, the defeat to FlyQuest shows they’re human, and will remove some of the dread any team might have had going against them.

Fnatic found themselves in a true group of death, with any team on paper able to top the group it was always going to be rough. In the end, Fnatic gave a great showing of themselves and will be looking forward to Knockouts, despite their opponent. Fnatic can easily make Semi-Finals if they show up, and they’re a team that has proven they have the gameplay for a longer series.

DAMWON went 5-1 in Groups, making them jointly dominant with Gen.G and Suning as they dominated their group. It was expected, of course, in a group with JD Gaming, PSG Talon, and Rogue. DAMWON will be a team to fear in the Knockout Stage and will be a favorite to make it to the Semi-Finals.

DRX lost out on the first spot after a defeat to TES in the final game, however, they’ll feel like they have a good chance to take it after a good showing in the group. Having only lost to tournament favorite TES during Groups, DRX will be a terrifying second seed in the Knockout Stage.

Gen.G is a similar story to Suning, though they’d probably have been the more likely to make it out of Groups. They suffered a shock loss to Fnatic in the first round-robin, with Fnatics loss to JDG meaning Gen.G’s second victory in week two saw them go top.

G2 had a decent showing in the group, despite two losses they showed in their series against Suning that they are deserving of a spot in the Knockouts. The big question will still remain, can G2 show the form of Summer playoffs or will their regular-season form spoil the party?

How are G2 and Fnatic looking?

With just two sides left from the West, G2 and Fnatic have a lot of pressure on their shoulders. The good news, they avoided each other in the draw thanks to seeding. The bad news, they face off against Gen.G and Top Esports. It certainly won’t be an easy task for either side, however, if you want to be the best you’ve got to beat the best.

The saving grace for both is that in the best-of-five you can adapt, and G2 and Fnatic always look best in these longer series. The reality is, both sides face an uphill battle to make it to the Grand Final, let alone lift the trophy and they’ll both need to bring their absolute A-game if they want to end 2020 with a bang.