Day Four of Worlds was the day for Group A to decide its fate.

The stakes were high on day four, with Group A’s fate on the line. The first game of the day saw the two unbeaten sides  SuperMassive (“SUP”) and Team Liquid (“TL”) take to the Rift as they looked to secure top spot. The battle for third and fourth looked set to be between Legacy Esports (“LGC”) and MAD Lions (“MAD”), with the pair playing each other in Game Two of the day it was all on the line. Four regular matches were scheduled but due to results and both ends of the table two tie-breakers were also played. Despite a slow start, and a loss of first blood, TL is able to sweep aside SUP and move just one game away from securing a spot at automatic qualification for Worlds. After a quiet early game, First Blood finally goes over to SUP after they were able to three-man dive Impact in the top lane. The resulting play saw SUP drop the Rift Herald to claim first tower and full plate gold. With Armut recalling, TL made a fast play top side to retaliate. Broxah moved in as Impact used Shen’s R to engage with Jensen backing them up. TL picked up two kills in reply as the gold lead is equalized.

While the early lead went the way of SUP, TL was able to pick up a big team fight at the 17th minute to pick up two kills and knocked down the tier one tower. TL then moved down to the drake as they moved onto the soul point, despite Bolulu attempting to steal away the drake. TL picked up another important mid lane fight as they moved to the Baron. SUP makes a last-ditch attempt to stall the take but drop yet another member as TL is easily able to secure the objective. With the soul drake spawning, TL moved to secure it, however, they lose the 2v2 fight as KaKAO is able to pick up the drake and delay the ocean soul for at least another five minutes. While TL still maintained a 5k lead, they failed to make much use of the Baron Power Play.

TL make a decisive play through the top lane, securing three kills and an inhibitor for their trouble after Corejj made a big play to start the play off. With the soul drake spawning up TL make the play to end the match. They baited in SUP and flanked behind them to close out a clean match and moving them just one match away from securing a spot at the Group Stage. In a must-win match for both sides, it was LGC that came out on top, as MAD end their Play-Ins 1-3 with them now needing TL to beat INTZ in Game Three to keep their World’s dreams alive. In a much faster game two, MAD was able to pick up an important first blood in the bot lane. However, LGC did manage to trade two back in quick reply after a TP top, LGC slightly misplays, however, and gave over another kill to MAD. With MAD looking to take the first Rift Herald, LGC sniffs it out and takes down Shad0w and claims the Rift Herald for themselves. In the bot lane another kill went over to LGC as they moved into a 1k lead early on.

LGC all but threw away the early lead in the bot lane after MAD takedown Raes, with Galio trying to save his ADC he just fed another kill to the Lions. With the second drake spawning, the big fight happens. LGC finds the perfect engagement, dropping multiple multi-member ultimates on MAD. However, MAD disengages and were able to take down two members of MAD as they move to take the drake. LGC reset with their remaining members and TP behind MAD who have multiple low HP members. LGC grab two big kills and claim the drake keeping their gold lead intact.

With soul point spawning, the teams again postured to fight again for the big objective. LGC claim the drake and get the big engagement, MAD pick up two big kills as the fight carries on with LGC pick up one. A big team fight won for MAD but the pressure mounted as they lost the third drake. LGC picked up another two massive kills in the top side after Humanoid was caught out as LGC moved towards the baron. While Alistar gets a huge engagement, MAD is helped by the Baron as they claim two kills and escape.

MAD picked off Alistar and looked to take Baron. They peel off and take a fight but it goes all wrong for MAD as they lose Humanoid early and lose all five members as LGC was able to claim an easy Baron. MAD tries to make a make-or-break play in the jungle and lose three kills early. Carzzy and Shad0w do just enough to delay the game a little longer as LGC picked up the ocean soul and looked to close out the game.  LGC finds the fight yet again and Carzzy and Orome are the only two left at the end of the fight. LGC pushed into the base as they moved to 2-1 as they looked to claim a shot at second place in Group A. INTZ do the unthinkable and defeat TL to keep their hopes of Worlds qualification alive as they now move onto a series against MAD. They made a big start to the game as they picked up a double kill early as their mid and bot lane collapsed onto Broxah. INTZ then pushed Tactical under his down and secured a kill onto him. TL secured a reply kill shortly after in the mid lane with Impact TPing in to secure the kill for Jensen.

The teams fight in the lower river and trade 1 for 1 as the rest of the members get out alive. Tactical is able to win a 1v1 on the bot side, however, as TL takes a 3k lead. The game slows down slightly in the mid game, though INTZ did manage to find a few key kills across the map. TL always seemed to have some kind of answer, however, as they maintained the 3k lead. INTZ was far from done with the match, however, they picked up a big kill on Tactical In the mid lane before taking down Impact in the TL jungle. They used that to pick up Baron with TL trading it back for a mid lane tier two.

INTZ continued to flip the gold lead as they claimed the mid and top inhibitors of TL before moving to claim a near uncontested Baron as they looked to cause an upset. As INTZ pushed the bottom inhibitor they claimed a huge pick on Tactical and Jensen. TL get one back but it’s too little too late as INTZ claimed a huge victory and kept their World’s dreams alive. LGC made a big statement as they knocked down SUP and secured themselves a tiebreaker match against TL. Sup picked up a big first blood after chasing Lillia out of their jungle. Babip is unable to flash away in time from the Wukong as SUP gets double value out of the kill. It took LGC until Rift Herald at 9 minutes to get themselves on the board as they picked up two quick kills, though SUP replied with one for themselves. LGC re-engage and pick up another two kills as the gold goes even.

With the third drake the objective of choice, the teams fight but no one drops in the initial fight. SUP is able to claim the soul point but get themselves stuck in the drake pit. LGC finally engages as Wukong comes in late to assist his team but it’s a 4-3 trade in favor of LGC. LGC managed to pick off Zeitnot as Baron spawned as they looked to claim a win condition. SUP tried to stop the Baron play but didn’t have the numbers as LGC picked up the Baron. SUP looked to claim drake priority and claim soul but despite Lulu slowing the LGC engagement, SUP gets crushed as LGC pushed down the SUP towers with 50 seconds still left on their Baron.

LGC started up the Baron as they looked to close out the match and secure a match against TL. LGC leave the Baron pit to fight SUP and clean up the fight as they knock down the SUP base to secure at the very least a spot in the Play-Ins best-of-3. 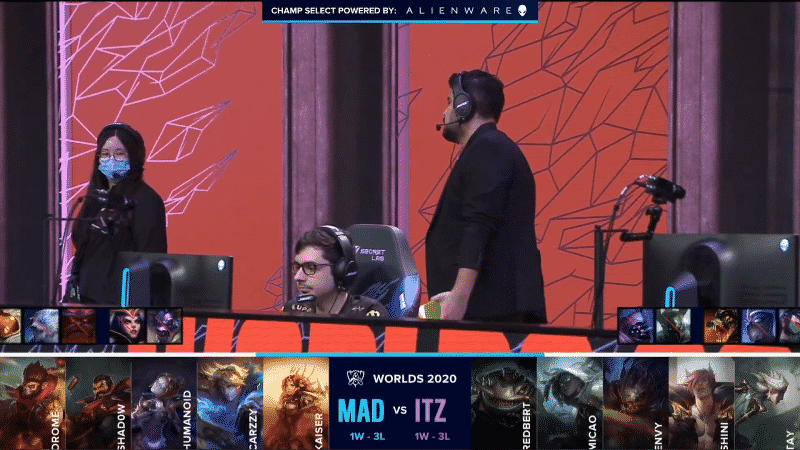 MAD was able to make it through INTZ and keep their dreams of Worlds group qualification alive for another day. INTZ had a solid grip on the early game and it resulted in them picking up first blood and dropping the Rift Herald in the top lane. MAD, however, was able to counter back with a kill quickly after INTZ stayed too long. MAD was able to pick up the first drake, though they did have to trade a kill over for it and lose the second Rift Herald as a result. At 17 minutes INTZ has a 1k lead as the pressure of elimination clearly impacts the game.

INTZ finds a big engagement on Carzzy in the mid lane but he manages to escape and no one from either side drops. MAD used two Flashes but the fight remains neutral. The fight finally happens a minute later and this time it was MAD who got the advantage as they claimed two early kills but it’s INTZ that won the fight pulling off the ace and losing three in return. They secure the soul point drake from MAD, meaning that soul point is delayed at least another 10 minutes. With the ocean drake spawning, INTZ loses their cool and engage in the MAD jungle. Unable to take anyone down, they lose Tay and have to pull back. MAD, as a result, pick up the third drake and claim soul point.

INTZ finds the engagement but again they’re unable to secure the kills. MAD turn it around and take out Shini, just as Baron is an option. INTZ is able to delay the Baron with MAD not willing to throw the game, especially with soul drake spawning. MAD are able to claim the ocean soul with INTZ not willing to engage. Next, MAD starts the fight in the INTZ top side jungle and takedown RedBert early with micaO quick to follow after. MAD roamed around the map and took down four members of INTZ as Tay tried to get back to his base. Finally, MAD pushed the mid lane and managed to take down INTZ and send the Brazilian side home as MAD went into the Play-Ins elimination rounds. Intro. TL is able to claim the first blood in the lower river as a four v four fight saw Broxah get the kill after a fight broke out around the scuttle. TL continued to turn the screws as they took an early 3 lead with Broxah dominating the game as carrying his TL teammates with him. LGC was able to claim the Rift Herald and get some plates as they tried to reduce the huge gold lead.

TL made a delayed four-man dive on the top tower as they cleaned up, securing all four kills and losing no one in return as they moved onto an 8k gold lead at the 15-minute mark. TL take their 11k gold lead and march down the mid lane of LGC and take it down. At just 19 and a half minutes into the game, TL came out as the dominant force in the series as they secured first place in Group A and moved onto Worlds Group Stage.