Rogue needed to take a win here to have a chance to challenge JD Gaming for the #2 spot in Group B. 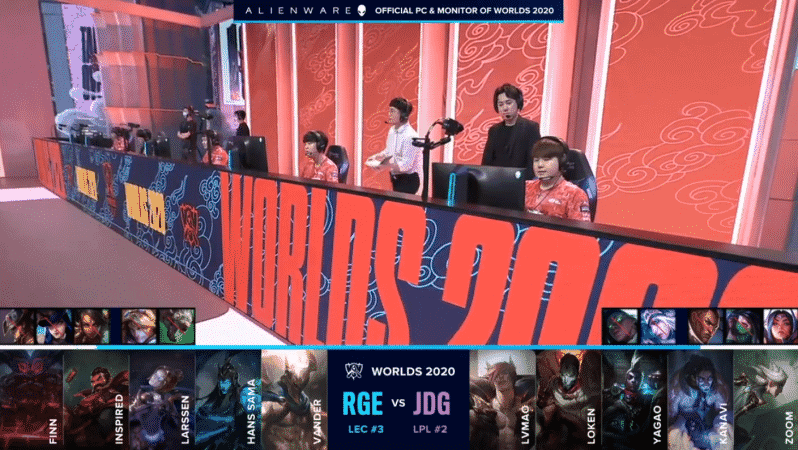 On paper, this second match between Rogue (“RGE”) and JD Gaming (“JDG”) was another lopsided affair. Though the result was expected, the way the game unfolded wasn’t. That’s because RGE came out swinging this game, fighting at every opportunity they had. It started at three minutes, when RGE collapsed on an invade on their red buff. Vander killed Kanavi for First Blood before dying himself. After this, RGE dove the bottom lane tower to kill Loken too,

Then, around six minutes, both teams dove a side lane tower, RGE bot again and JDG top. Funnily enough, the outcomes were the same, one-for-ones. Throughout the early game, it seemed like RGE was applying pressure, but through smart picks and objective takes JDG was actually pulling ahead. Because of both teams’ compositions, there were a ton of fights, but JDG started pulling ahead with better team fighting overall.

The mid game continued to be bloody, and though RGE was fighting, JDG was constantly expanding the gold difference. At 25 minutes the deciding team fight occurred. As JDG went for Soul, RGE forced a desperate team fight, where JDG smashed them five-for-one, picking up Mountain Soul as a prize. Three minutes later, another team fight broke out near the Baron, which JDG won four-for-zero. They took the Baron right after that, then began their siege. Once again, RGE attempted to fight, but lost Hans Sama and were unable to defend their base. JDG rampaged through RGE’s base, killing multiple members and the Nexus. With this win, JDG eliminates both RGE and PSG from the tournament to make it a two-horse race between them and Damwon for the first seed.