LPL civil war two got underway as Top Esports (“TES”) and Suning Gaming (“SN”) took to the Rift for a place in the Grand Final against Damwon Gaming.

Coming into the series, TES was the clear favorites in the matchup considering their victory in the LPL as the first seed. SN came into Worlds as the outlier for most groups, with many first seed teams actively wishing for them in their groups. It was the LEC’s G2 Esports that ended up getting them in their group, and we all know how that went. 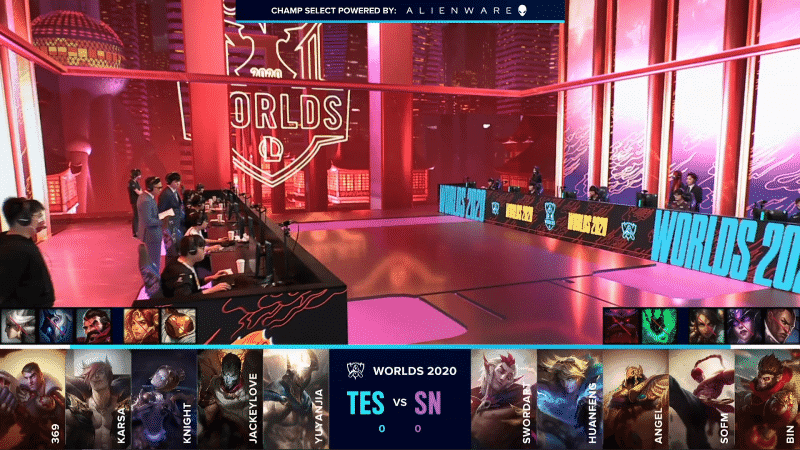 The first game of a series is crucial in setting up expectations. We saw it yesterday with G2 vs Damwon. Despite G2 picking up a Game Two win, the series tone of one-sided matches was set in motion from the offset. For SN, getting a first game win could be crucial, especially as underdogs in the series.

SN got off to the start they needed, picking up the First Blood in the top side of the map with the help of a gank from Lee Sin. TES was able to quickly counter the kill with a reply kill on the respawn. Meanwhile, SN all-in the TES bot lane but fail to make the play work, practically donating over two more kills.

TES continued to snowball the early lead as they moved to 2k gold ahead. In addition, TES gained two early drakes to set themselves up for Soul point. With the Soul point drake spawning onto the map it’s SN that took it to stop TES from claiming a win condition at 23 minutes. On the tail-end of the fight, SN was able to take down two members of TES. They also picked up the Baron Buff, moving them back into the gold lead. Unfortunately, SN was not able to make great use of the Power Play though. They did, however, make a brilliant play to find an Ace onto TES when the next drake spawned.

SN immediately charged down the mid lane and destroyed the mid lane turrets. Despite a last, desperate defense from TES, SN is able to keep it together as they pulled off a massive Game One victory. 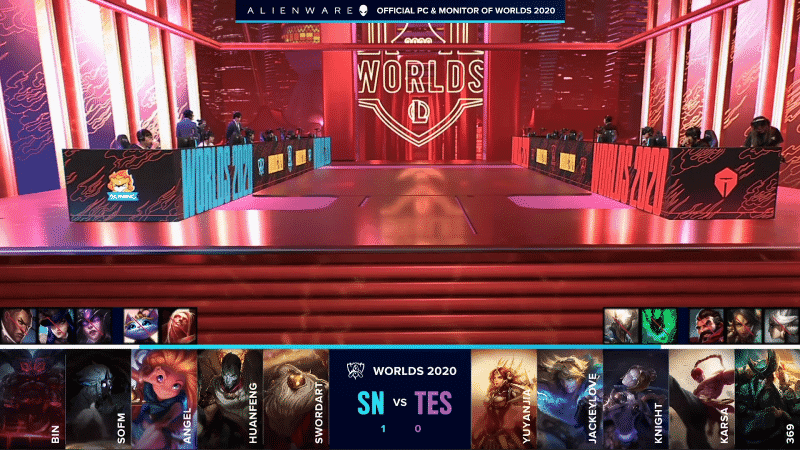 After a huge Game One, SN did what no one expected them to do. Now, heading into Game Two, it was all to play for. Go 2-0 and pile the pressure onto TES or drop to 1-1 and lose your momentum.

The early game was pretty quiet, but SN yet again is able to pick up First Blood. They grab an important kill when the second drake spawns, meaning it’s an easy secure for them. Not much action took place before the third drake, which was secured by SofM for SN. The fight after the drake was taken saw both teams lose a member. Despite TES having a small lead, SN is one drake away from Soul at 20 minutes.

TES is once again able to get an important pick onto SN. With Soul point spawning, the member of SN respawns the game could well come down to the fourth drake. At this time, TES holds a decent 1.5k gold lead. TES managed to take an important drake to delay the SN Soul pickup, however, JackeyLove dies in the process. Crucially, Karsa is able to get one in return as TES extended their lead to near 3k. With that, TES was able to also claim Baron Buff and more kills as they put more pressure onto SN, moving 6k ahead. With 10 seconds left on the Baron, they baited a fight with SN and took down two members before taking down the bot lane inhibitor.

SN mounted a solid defense as TES moved away to move to secure the drake. They got an incredibly important pick in the top side, which was traded back before SN snipped 369 to take the fight advantage as they kept on kicking in this game. However, it’s not enough for SN as TES found picks onto SofM and huanfeng. TES couldn’t be stopped inside the base and they bring the series to 1-1. 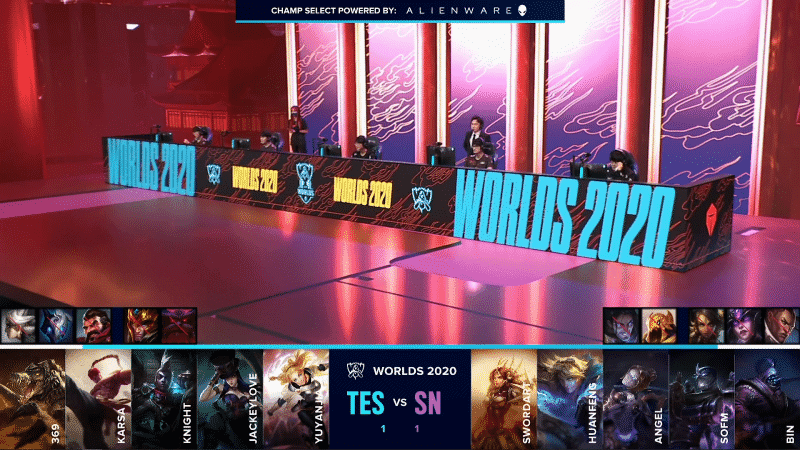 TES brought the series back to a level playing field in Game Two and it set the series up to be a banger. Despite SN holding their own in the series, TES came away with a big lead as they looked to get a stranglehold on the series.

But in this game, SN picked up first blood once more, though it was quickly traded back. They then moved to the top side and picked up two great kills onto Bin and SofM as they took a huge early 1.5k gold lead. SN continued to snowball the game, moving 5k ahead as they decimated the top lane, with the jungle Shen pick clearly the difference-maker.

TES managed to find a big play with the second drake spawning. SN engaged initially but TES reacted hastily with TPs flying into the bot lane. The resulting fight sees them pick up two kills. Yet again TES picked up a huge double kill on the bot side of the map. With this, they started to come online, closing the gold lead to just 3k in the process. SN did manage to stem the bleeding by picking up the third drake, slowing down a possible TES win condition in the process. TES do it again, picking up a pick before the drake spawned.

SN, not to be outdone though, is able to slay the TES support and bring the drake score to two apiece. In a match that seemingly only activates around drakes, it’s drake number five that prompts the next action. Here, SN claimed their Soul point drake. Next, SN moved up to the Baron as they gestured around the bit, begging TES to fight them. With both sides dropping health bars, SN pulled away from the buff and both teams handshake on the play and reset.

Back on the map. TES Karsa made a play to try to take down Bin with the Soul drake spawning. But the tier one bot lane tower remained standing and he dies trying to make the play. TES dropped a second member shortly after, allowing SN to claim a free Soul as they moved to the Baron. With the Baron Buff claimed as well, SN pushed into the TES base and snagged a quick kill. TES do their best to defend but they just can’t do it as SN claim a few extra kills in the process and go 2-1 up in the series. 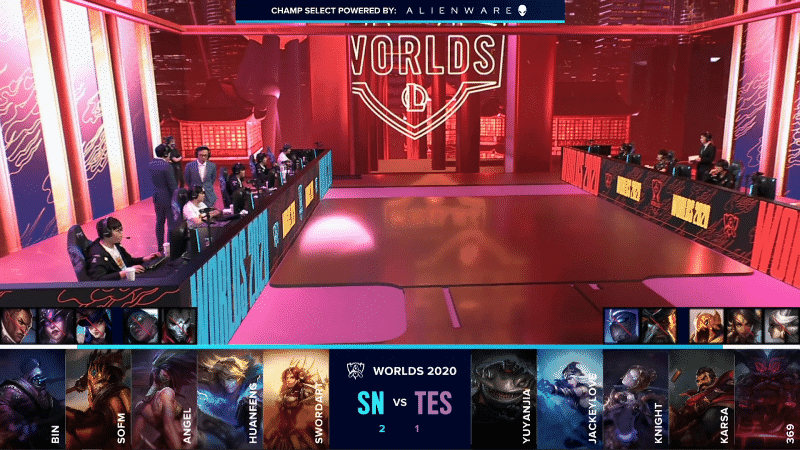 With SN going into the series on double match point, TES had it all to do if they wanted to keep their Worlds journey alive. SN looked clinical in all three games, and even in the loss in Game Two, they looked like they could take it on multiple occasions. Game Four would be SN’s chance to prove they can handle the pressure and secure a spot in the Grand Final.

SN yet again picked up the First Blood, this time onto JackeyLove. TES pulled the trigger on the follow up gank and picked up one kill, however, SN also counters as they take down two more members of TES. With this, they again climb to a huge 1k gold lead in the series.

TES got a grip on the game despite still being in a slight gold deficit. Once more, they managed to get to Soul point almost uncontested. However, the bad news for TES is that SN has two turrets and a free farming Jax at 19 minutes, which gives SN a solid win condition. SN picked up a fight, but thanks to the stream and broadcaster’s pausing we’re not sure exactly what happened. Thankfully, the replay showed just how dominant SN was as they Aced TES, losing just one member in return. SN also picked up the fourth drake to stall out the TES win condition.

Onward to the final boss

Next, TES got a huge pick onto huanfeng around Baron as they looked to catch out SN. But TES was pulled off the buff so they recalled and reset. Back on the Rift, SN got a pick onto JackeyLove as they baited TES at the Baron. The fight is delayed until the drake, where SN pulled the trigger in the mid lane. Here they knocked down three members of the TES roster, dropping one in reply. Afterward, SN picked up the Baron, losing only SwordArt in the process. TES continued to chase but couldn’t do enough as SN looked to open up the map.

As they began to siege, SN made a huge play on the bot side of the map. While they did lose a member, two members of SN knocked down the TES bot lane inhibitor and one Nexus turret. After that, SN moved to Soul point since TES was unable to pick up Soul point for themselves. With Baron Buff fading, a major 5v5 breaks out and it’s SN that wins it. They Ace TES and picked up a massive win to take the series 3-1 and secure their spot in the LoL Worlds Finals.