Leeds United have signed Brazilian forward Raphinha from Rennes on a four-year deal.

The 23-year-old was announced by the Elland Road outfit last night, becoming the fourth player to join the senior team this summer after the signings of Rodrigo Moreno, Robin Koch and Diego Llorente.

While he wasn’t known to many Leeds fans until a few days ago, Raphinha must be a special player for head coach Marcelo Bielsa to sanction his move.

Manchester United midfielder Bruno Fernandes knows the Brazilian from their days together in the Portuguese top-flight with Sporting Lisbon, and here is how the £68 million man has reacted as his former teammate joins Leeds:

very happy for this new challenge in my career. thank you very much everyone involved @leedsunited @d20sportsoficial @adidas 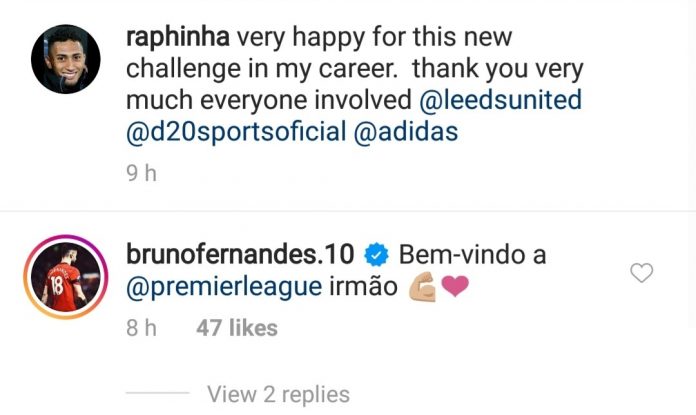 “Welcome to the Premier League my friend”

Raphinha scored nine goals in 41 appearances during his time with the Primeira Liga giants.

He scored 22 goals in 85 games for Vitoria Guimaraes and ended his time at Rennes with eight goals in 36 games.

Given his style of play, quality and versatility, the Brazilian would likely hit the ground running at Leeds, and he could soon be playing for his country if he religiously takes in Bielsa’s lessons.