Everton boss Carlo Ancelotti insisted his side can take confidence from their battle with Liverpool, but delivered the bad news when providing an injury update on Seamus Coleman.

The Toffees went toe to toe with the Champions and emerged with a hard-fought 2-2 draw at the final whistle.

The game threw up a host of talking points, ranging all the way from red cards to offside shoulders.

Nevertheless, the shared spoils ensured Everton remained top of the league, and Ancelotti was ecstatic with how his team were able to emerge unscathed with a draw from such a frenetic contest.

Speaking to Match of the Day, the Italian said: “It was terrific. It was a good game in general. Exciting game. Lot of fight, lot of pressing, lot of intensity.

“It was a good test and I have a good feeling.

“To know we can compete with the champions of the last season it gives us more confidence for the future.”

On Liverpool’s disallowed goal in injury time, Ancelotti added: “I hoped the goal was offside. If we lost my feeling would not have changed.”

Everton got back on terms late into the second half through in-form Dominic Calvert-Lewin. 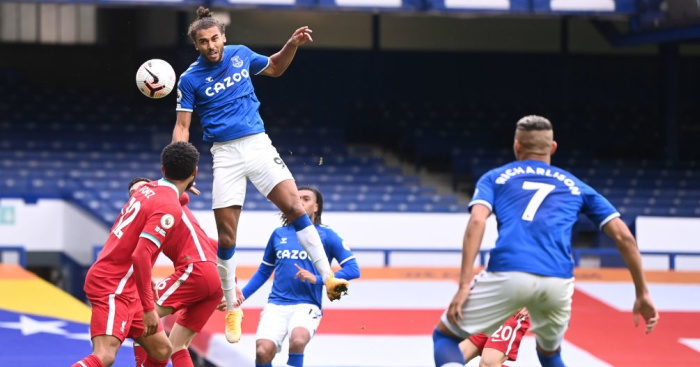 The red-hot centre-forward displays tremendous athleticism to leap high into the sky to meet Lucas Digne’s cross before placing his header beyond the reach of Adrian.

Regarding his striker’s superb leaping ability, Ancelotti said: “It’s genetic. Thank goodness he has it and is using it very well.”

There was an element of bad news for The Toffees, however, with the manager confirming full-back Coleman had suffered a hamstring injury early in the first-half.

“Seamus Coleman has a hamstring injury,” he continued. “We will probably have Jonjoe Kenny for the next game.”