Everton boss Carlo Ancelotti has hinted that a move for Ben Godfrey is in the offing after watching his side dismantle West Ham on Wednesday night.

The in-form Dominic Calvert-Lewin blasted a hat-trick as Everton swept the Hammers aside 4-1 in the Carabao Cup.

Afterwards Ancelotti was asked about Norwich centre-back Godfrey after reports indicated the Italian had made a bid for the player.

Sky Sports reported on Wednesday that Everton had made a £26m bid for the 22-year-old centre-back with £20m up front, and a further £6m in add-ons.

And the Italian coach did little to quell the speculation.

“I said in the past that we are looking for a centre-back because we are short there, and Godfrey is a really good centre-back, but he is at this moment playing for Norwich, so I can’t say more,” said Ancelotti.

Everton have plenty of time to get the deal done though, because the domestic window for Premier League and EFL clubs does not close until October 16.

Godfrey made 30 appearances in the Premier League for Norwich last season, but could not stop them being relegated.

He is under contract until 2023, but the Liverpool Echo report Godfrey is keen on a move to Goodison so his international prospects are not harmed.

His form last season earned him a call up to the England under-21 squad and with the Euros taking place next summer he could well force his way into Gareth Southgate’s plans.

Ancelotti explains why Calvert-Lewin has improved 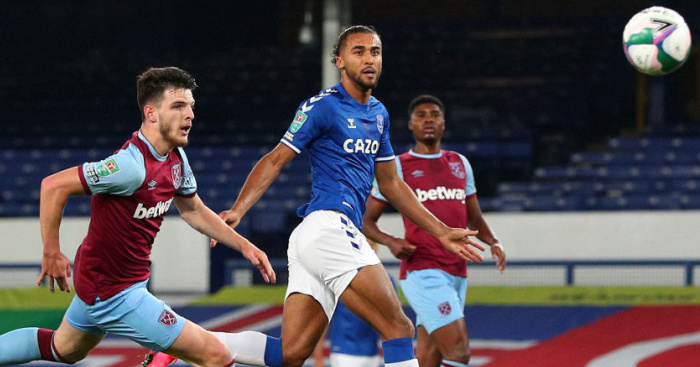 Meanwhile, Ancelotti opened up on how and why Calvert-Lewin has become such a feared centre forward.

The Toffees made it six wins from six in all competitions in the new season after sinking West Ham.Their free-scoring frontline once again impressed, with Calvert-Lewin and Richarlison combining to score all four of Everton’s goals.Speaking after the impressive win (via The Liverpool Echo), Ancelotti said: “I’m very pleased. We played well, we had it under control. When West Ham equalised, we didn’t lose focus, concentration or motivation. It was good.”

Calvert-Lewin continued his remarkable form under the Italian, and Ancelotti pointed to how and why his centre-forward has improved so much in such a short space of time.

“He is more focused in the box,” he added. “He is efficient and really clinical. It was a fantastic first goal. He can go, he can stay (with England). It doesn’t matter, it’s not my problem.

“We started really well this season but our target is the same, to be in Europe next season. We have to be focused because the season is so long.”