Barcelona have confirmed that young superstar Ansu Fati will undergo surgery on Monday after suffering a knee injury in their last fixture.

The 18-year-old came off at half-time in the 5-2 win over Real Betis, being replaced by six-time Ballon d’Or winner Lionel Messi. The Catalan giants have since confirmed via Twitter that Fati has suffered an internal meniscus tear in his left knee.

Tests carried out this afternoon have shown that Ansu Fati has an internal meniscus tear in his left knee. The treatment to be followed will be determined in the coming days. pic.twitter.com/CF3FZaur5P

And today they announced on their official website that the youngster will go under the knife on Monday. The surgery will be performed by Doctor Ramon Cugat, who notoriously has ties to Barcelona and Manchester City.

The injury will be a big miss for La Blaugrana. Fati has been a sensation this term, scoring five goals and registering a further two assists in all competitions. He is currently the club’s top scorer and is just two behind the leaders in the La Liga Golden Boot race.

It is this form, coupled with some impressive displays last campaign, which has caused a massive fuss over the Spaniard. In August 2019, Fati became Barcelona’s youngest ever La Liga goalscorer.

Three months later, the winger became the youngest ever Champions League goalscorer when he netted a late winner at the San Siro against Inter Milan. 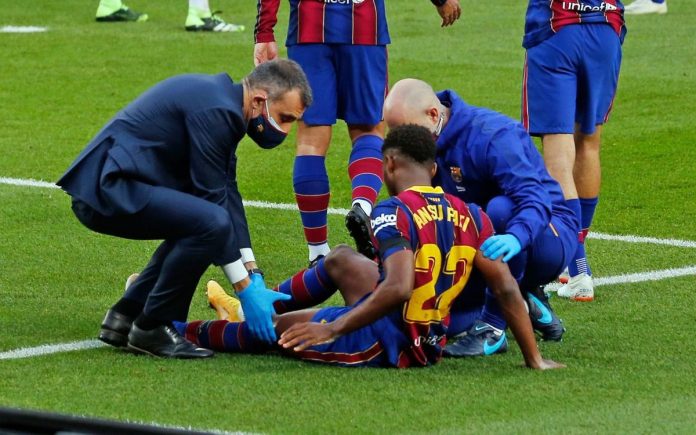 He’s not the only youngster making waves at the Camp Nou. 17-year-old Pedri has made a positive start in a Barcelona shirt, while summer signing Sergino Dest has also put in some encouraging performances.