Manchester United’s impending new arrival, Donny van de Beek, held a discussion with his best friend in the game before agreeing on the move.

The Dutch international has passed his United medical in the Netherlands.

The prospective deal will be in the region of €39m, plus another €5m in add-ons. It “is expected to be completed in the next few days while the player is on international duty”, reports Sky Sports.

Van de Beek helped Ajax retained their Eredivisie title last season with 10 goals and 11 assists across all competitions. His form has caught the attention of several of Europe’s big guns. However, it is United who have won the race.

With the likes of Real Madrid, Barcelona and Tottenham also making enquiries, Van de Beek clearly had a decision to make.

However, the 23-year-old wasted no time in consulting with his best friend in the game, Barcelona star Frenkie De Jong.

De Jong himself made the move from Ajax last summer to the Nou Camp. And his Holland teammate said he had no doubts Van de Beek was making the right move.

“I spoke to Donny [Van de Beek] about his transfer,” admitted De Jong. “This is a beautiful transfer and we are all very happy for him.

“Did he ask me for advice? No, no, he can think by himself.”

“Manchester United have pulled off a great piece of business here,” he told Sky Sports. 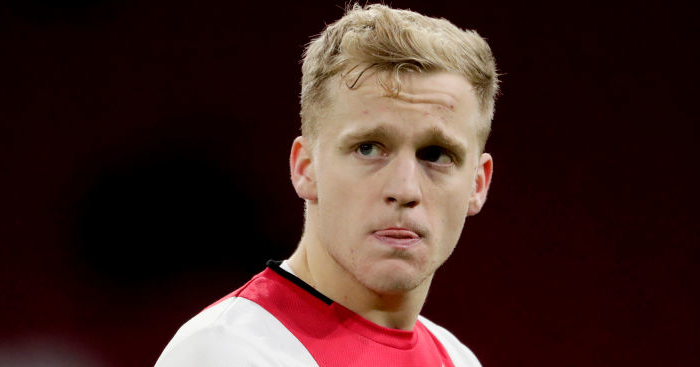 “I think basically, they’re getting an £80m player for half the price. They’re getting him for £40m because of the coronavirus pandemic, because clubs like Real Madrid who wanted him can’t afford him this summer.

“This guy is the real deal.

“He’s already a big, big star but I think at Old Trafford he is going to become one of the best players in the world.

“And I think it’s significant that he chose to come to United. I think Real Madrid were in his ear, saying ‘wait for us, we’ll come back to you later either this summer or next summer’.

“But he wanted to move to Old Trafford.”