David Alaba has been warned to “think twice” before leaving Bayern Munich for another side, amid January transfer links with Liverpool.

Reports on Wednesday claimed the Reds were exploring the possibility of bringing Alaba to Anfield in January.

The Austrian is capable of playing anywhere across the defence or midfield and it’s believed Klopp sees Alaba as additional cover at the heart of defence.

The door has apparently opened for Liverpool to make a January swoop for the Bayern Munich man due to his contract situation.

Alaba’s deal expires next summer and that has increased speculation that Liverpool could take advantage of the situation.

However, Flick has pointed to Bayern’s treble-winning season as a reason why Alaba should think twice over a move away.

He also believes his performances have been unaffected in light of the speculation linking him with Liverpool.

Alaba has made seven appearances so far this season and Flick likes what he sees in the Austrian.

“I feel he’s the same as last season, very focused, loud on the pitch. He’s one of the players who leads our defence. For me, there’s no difference between now and last season.

“I’m not concerning myself with [worries about a January transfer] at all right now.

“I still hope he’ll sign with Bayern because I think he knows what the situation is like here in Munich. It’s a lot of fun to train with a team with a good atmosphere here. We play successful football and this club is one of the best in the world.

“The conditions are top for every player right now and I think he’ll think twice about changing that.

“It’s his decision – and we have to respect that, obviously – but I hope he will stay. He has to decide, my feeling is irrelevant.”

Alaba has started most of his games alongside another experienced star in Jerome Boateng. 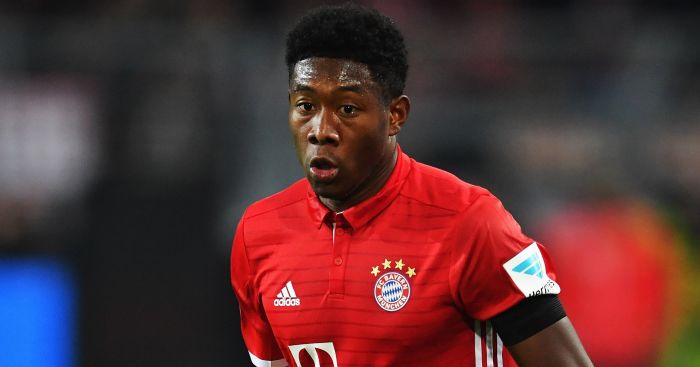 Flick reckons that, while the pair are well suited to one another, he may rotate in the coming weeks.

Bayern travel to Cologne on Saturday  – the first of four straight away games.

“It’s the way it is,” he said. “I would’ve preferred to have a home game in between but we accept the situation. We will try to distribute the strain. I’m not going to tell you how we’ll do it, but we accept all these trips.

“We flew into Moscow and flew out, to get back to Munich quickly. We have to accept it and try to win the three points everywhere.”

READ MORE: No panic from Klopp as he names seven players who can fill in at centre-half for Liverpool