City surrendered a lead to crash 5-2 at the hands of the Jamie Vardy-inspired Foxes, who powered to the top of the Premier League with three wins from three as a result.

Spanish midfielder Rodri claims the loss came down to small details and bad luck, while he was unimpressed with Leicester’s gameplan.

The 24-year-old said: “I think we did a good performance for the first 25-30 minutes, but it is a difficult game to read what happened.

“We conceded, we made mistakes – but they didn’t propose anything. They just defended, came here (to put) 11 players behind.

“We prepared for the game so hard. We do everything to win. For very small and tiny details we lost and we (could have) drawn the game.

“I think this match can happen just one of 100 (times), but it’s happened. We have not been very lucky, that’s the truth. Always to be champions you need to be a bit lucky.

“We have to improve and learn what we do but we are in the beginning of the season. Nothing happened, no-one dies.

City could certainly bemoan their luck with injury and illness, with a host of players unavailable to manager Pep Guardiola. With Gabriel Jesus becoming the latest casualty last week, the City manager began the game without a recognised centre-forward.

That initially did not seem a problem as Riyad Mahrez struck early against his former club, but City failed to make the most of their early domination.

Vardy turned the game around in dramatic fashion, grabbing a hat-trick with two penalties either side of a neat flicked finish. James Maddison scored a stunning fourth and Youri Tielemans added a third spot-kick late on after a Nathan Ake consolation.

The only positive for City came off the field, with Benfica announcing later in the day they had accepted an offer of an initial £62million from the English club for Portugal defender Ruben Dias. A deal for the 23-year-old is expected to be completed in the coming days, ending City’s long quest to strengthen their back line.

Leicester are also hoping to add to their numbers to build on their superb start to the campaign.

Rodgers has moved on from CL woe 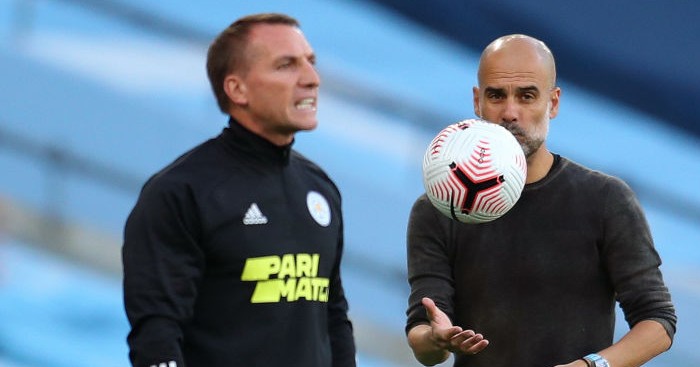 Manager Brendan Rodgers said: “We want to improve the squad, of course, there is a long season ahead and the timeline of games is very tight. We need to have more bodies in and the club will work very hard on doing that.”

It is the first time Leicester have won their first three matches of a top-flight campaign.

Confidence seems to have returned after a frustrating end to last season when they lost what had once seemed a tight grip on a Champions League place.

Rodgers said: “I think there’s probably a little more made of that than there was within the squad. I reinforced to the players over the summer, whatever the narrative, they had a fantastic season.

“Of course we wanted the Champions League but we didn’t make it, let’s move on from it.

“Whatever we did last year or people thought we didn’t do, didn’t really matter. This is a new season, a new motivation and the excitement for me was there are continual improvements we can make.”