Brighton have officially announced Graham Potter as their new manager.

Swansea had offered Potter a new contract in an attempt to ward off interest from the Seagulls, who sacked Chris Hughton following the end of the Premier League season.

However, after the Championship side initially rejected Brighton’s approach, former Ostersund boss Potter completed the formalities of a four-year deal ahead of being unveiled on Monday afternoon.

Following Potter to the south coast as part of his backroom staff are Billy Reid, Bjorn Hamberg and Kyle Macaulay.

“I was sold by the long-term vision and passion shown by Tony Bloom, Paul Barber and Dan Ashworth. The ideas and plans they have for the future of this football club excited me; I am thrilled and honoured to be a part of it,” Potter said.

“This club has been on an incredible journey and my aim along with Bjorn (Hamberg), Kyle (Macauley) and Billy (Reid), is to ensure the great work that has gone before us is built on, as we strive to cement our place in the Premier League for many years to come.”

Brighton chairman Tony Bloom had wanted to appoint a new manager as quickly as possible to aid pre-season planning ahead of the 2019-20 campaign.

Potter, who turned 44 on Monday, had two years left on his current deal at the Liberty Stadium.

Appointed last summer, Potter guided the Swans to a 10th-place finish in the Championship last season.

Potter was credited with playing an attractive brand of football, even though financial constraints at the Welsh club saw him lose 16 first-team squad members. 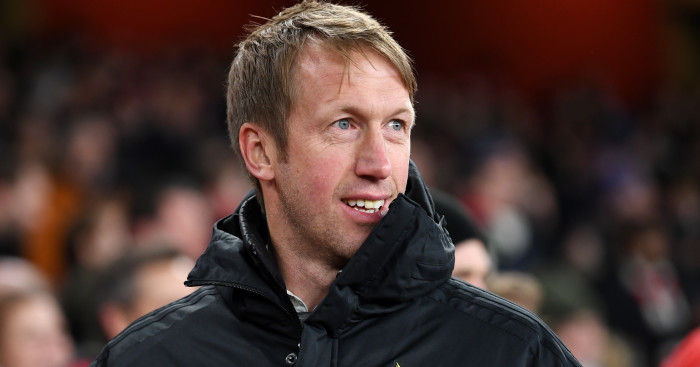 “We has absolutely no desire to lose the services of Graham after the excellent work he had done over the course of his debut season,” said City chairman Trevor Birch.

“Unfortunately after amicable discussions, Graham expressed a desire to challenge himself in the Premier League and we reluctantly allowed him to speak to Brighton.”

Brighton will be hoping Potter, who won three promotions with Ostersund and steered them into the Europa League, can help move the south-coast club forwards.

Under Hughton, the Seagulls managed just two wins from their 18 league matches after the turn of the year and finished 17th, only two points clear of Cardiff in the final relegation place.

Seagulls chairman Bloom said: “We are delighted to have secured the services of one of the brightest young English coaches.

“Graham Potter has an excellent record of developing teams with an attractive playing style, fierce determination and a strong collective spirit.

“We are excited about our third successive season in the Premier League and we now wish to build on the solid foundations laid by Chris Hughton.

“We believe that Graham is an excellent fit for our club and we are very much look forward to working with him.”

The post Brighton hoping Potter can work his magic after unveiling him as new boss appeared first on teamtalk.com.