The Mexican hitman’s strike flew in off the head of Kalvin Phillips as the visitors triumphed at Elland Road to go sixth in the table, while Leeds drop to 10th.

Marcelo Bielsa’s men started very much on the front foot against a defensive-minded visiting side.

A rare Wolves attack saw Jimenez volley a near-post corner over the bar, before the home side were back dominating possession.

And they came close to breaking the deadlock five minutes before the break, when a corner to the back post found its way through to Rodrigo but he volleyed straight at Rui Patricio in the Wolves goal.

But it was the visitors who had the best opportunity of the half when a cross to the far post was pulled back superbly to Daniel Podence, who jinked inside before testing the palms of Illan Meslier with a fierce drive.

Wolves came out for the second period with far more attacking intent and they were slightly unfortunate to see a goal ruled out for offside in the 53rd minute.

Conor Coady’s lofted pass to the right found Podence, whose cross was poorly cleared and Romain Saiss controlled before lashing a stunning volley past Meslier. However, Podence was shown to be marginally offside in the build-up and the goal was chalked off. 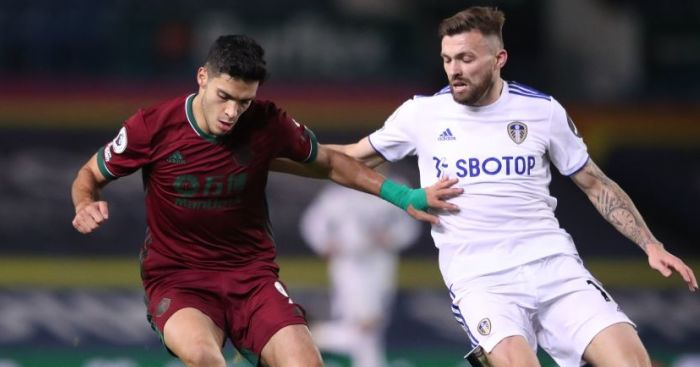 Podence was in the action again minutes later when he cut onto his left-foot and forced Meslier to tip a fine effort around the post from 20 yards.

But Wolves did take the lead their second-half display arguably deserved with 20 minutes to go, although it was down to a large stroke of luck.

Jimenez drove across the Leeds area before cutting back onto his right foot and trying his luck with an effort that looked to be heading straight at Meslier, only for Phillips to nod it past the stranded stopper.

The home side introduced Ian Poveda and Pablo Hernandez in the search for an equaliser, with the latter having a shot just deflected over the bar in the 80th minute.

Leeds handed a debut to new signing Raphinha with eight minutes to go but they failed to muster another effort on target and Wolves ran out narrow winners.