Dominic Calvert-Lewin scored his 10th goal of the season as Everton earned a 2-2 draw with Liverpool in the Merseyside derby at Goodison Park.

In one of the most even derby clashes in recent years the hosts were more than a match for the champions. A clinical Salah strike midway through the second half looked to be enough to win it before Dominic Calvert-Lewin levelled with eight minutes to go.

Goals from Sadio Mane and Michael Keane saw the game 1-1 at the break, while Virgil van Dijk was substituted through injury after a shocking challenge from Jordan Pickford, which went unpunished.

The Spain international and Sadio Mane both came into the side having recovered from Covid-19, as did Jordan Henderson, who has not played for the club since September 20 because of a knee injury.

Joel Matip also made his first appearance since the opening day of the season, replacing Joe Gomez.

Everton, too, were at full strength with Allan and Andre Gomes back in the starting line-up.

Liverpool with Mane back after a period of isolation opened the scoring after just three minutes.

Left-back Andy Robertson won a 50-50 with Seamus Coleman on the right edge of Everton’s area and his driven cross was fired home first-time by Mane at the near post.

Under-scrutiny England goalkeeper Jordan Pickford was fortunate not to concede a penalty and receive a red card after clattering knee-high into Virgil Van Dijk.

"He could have easily been sent off."

"I'm very surprised it's just been forgotten about?"

Should VAR have stepped in after this? pic.twitter.com/wTcW6CHcIf

Pickford was saved by a marginal VAR decision which ruled Van Dijk’s shoulder was offside, and Everton benefited further as Liverpool’s defensive linchpin was unable to continue and was replaced by Joe Gomez after 10 minutes.

And Van Dijk’s presence was sorely missed as Everton equalised in the 20th minute.

Adrian was forced to parry Dominic Calvert-Lewin’s shot behind and from the resulting corner the Liverpool goalkeeper got both hands to Michael Keane’s header but could only push it into the roof of the net. 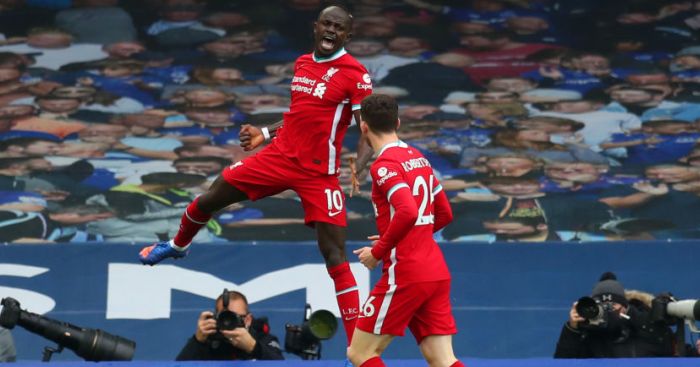 Liverpool should have been 2-1 up on 35 minutes with almost a carbon-copy of their first goal.

Robertson again set up Mane near the penalty spot, but the forward shanked his shot wide.

The game was level at the break, but Liverpool were pushing for a second soon after.

Henderson and Fabinho fired shots over, before Calvert-Lewin almost got on the end of ball in from Lucas Digne.

The hosts got closer though on the hour mark when Richarlison hit the woodwork from a fine James Rodriguez ball in. 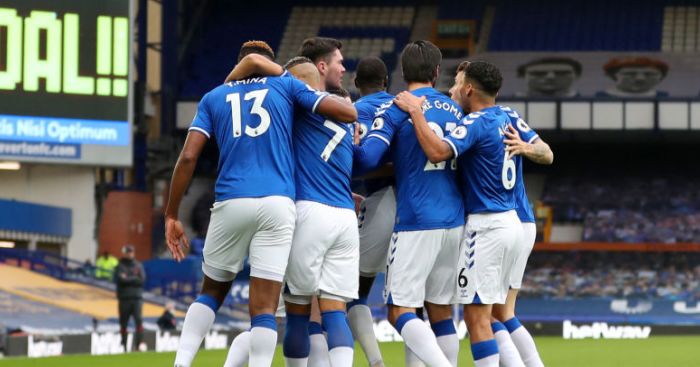 However, it was Liverpool who got their noses in front on 72 minutes. Yerry Mina’s attempted clearance fell to Mo Salah and he dispatched his effort, first time, into the corner of the net.

Everton hit back though through the prolific Calvert-Lewin. The England man headed his 10th goal of the season, rising highest at the back post to head home a Digne cross.

Richarlison saw red late on after sliding in late on Thiago as Everton finished with 10 men.

Henderson thought he had won it at the death with a strike, but the goal was ruled out with Mane adjudged to be offside.