A late penalty ensured Newcastle claimed a point against a dominant Tottenham with their only shot on target.

Spurs returned to domestic duty after their exploits in the Europa League qualifiers in midweek, which had seen them beat Shkenidja to reach the play-off round.

Opponents Newcastle went into the game on the back of their biggest ever competitive away win, having beaten Morecambe 7-0 in the Carabao Cup.

The Magpies met their match this time, as Spurs produced a dominant display. But a late penalty due to a handball meant it finished all square.

After a barrage of chances early on, Lucas Moura gave Tottenham the advantage by scoring in the 25th minute. Harry Kane set up the Brazilian star with another assist to give him a tap in. 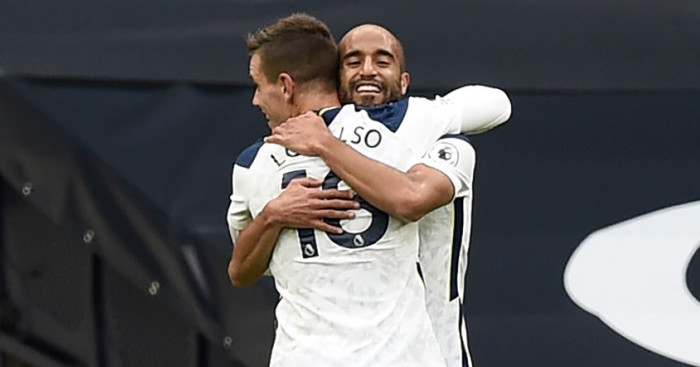 By that point, Newcastle keeper Karl Darlow had already been busy, preventing a couple of Kane’s own chances, as well as a free kick from Giovani Lo Celso.

Darlow denied Kane again just after Moura’s goal, before the England captain set up Son Heung-Min, only to see the South Korean hit the post.

Son was thwarted by the goalposts again when his left-footed strike hit the bar in Spurs’ last big chance of the first half.

DARLOW STAYS ALERT IN SECOND HALF BEFORE DRAMATIC EQUALISER

Tottenham started the second half in the same fashion, with Darlow having to stop another effort from Moura after Lo Celso’s corner.

Lo Celso then had an effort saved himself, having fired the ball straight at the Newcastle keeper.

There were further chances for substitutes Steven Bergwijn and Erik Lamela with a volley and a free kick respectively, but Darlow was equal to both.

There was a nervous moment for Spurs late on, when Ben Davies smashed the ball into teammate Pierre-Emile Hojbjerg in his own box. The ball only trickled behind for a corner, from which the referee waved away Newcastle’s appeals for a penalty for handball.

And deep into stoppage time, VAR looked at another possible penalty for the away side when the ball struck Eric Dier’s arm. The referee gave it, and Callum Wilson fired home despite Hugo Lloris diving the right way.

A furious Jose Mourinho walked straight down the tunnel before the game had even finished.

Spurs finished the game with 12 shots on target, whereas Newcastle only had one. However, it was enough for them to earn a share of the spoils.

You can see how all the action unfolded via our Live Centre here.