Eriksen could be the missing link in Arteta's Arsenal puzzle – originally posted on Sportslens.com

According to Corriere dello Sport, Arsenal have been linked with a move for the Inter Milan midfielder Christian Eriksen.

The Danish international joined Inter Milan from Tottenham in January this year and it would be fair to say that the move has not worked out for the player or the club so far.

Eriksen has started just 11 games in the league for Inter Milan so far and he seems to have fallen out of favour with Antonio Conte.

As per CdS, the Serie A giants are prepared to cut their losses and are plotting a swap deal involving Granit Xhaka.

Although a swap deal seems unrealistic, Eriksen’s move to North London could be ideal for all parties involved.

The 28-year-old is in desperate need of a change of scenery and a move back to the Premier League (and London) could help him recapture his form and confidence. Eriksen played the best football of his career in England and he picked up 69 goals and 89 assists during his time at Tottenham.

Arsenal could certainly use someone like him in their midfield. Arteta’s midfield has looked disjointed so far this season and they are severely lacking in craft and imagination. Eriksen could be the creative missing link between midfield and attack.

The Gunners were linked with Houssem Aouar in the summer, but the transfer never materialised. Mikel Arteta doesn’t seem keen on using Mesut Ozil either, a player who would, under ideal conditions, be the solution to Arsenal’s current on-pitch problems. The German has been left out of the club’s Premier League and Europa League squad this season and his playing time at the club is over.

The lack of creativity has affected the performance of their strikers as well. Both Lacazette and Aubameyang have been struggling to score this season due to the lack of quality assists from midfield.

Aubameyang has scored just two Premier League goals this season and Lacazette has three goals to his name. The Gabon striker has had just 10 shots in the league so far compared to the likes of Mohammed Salah (Liverpool) and Harry Kane (Tottenham) who have had 34 and 38 shots respectively.

It is evident that Arsenal do not like to take risks and they are not adventurous in their approach.

They need someone to fill the creative void in the side and Eriksen has the tools to plug that gap. Despite having a poor season with Inter Milan, Eriksen has averaged 2.8 shots on target, 2.4 crosses, 2.7 dribbles, 1.99 touches in the penalty area, 4.2 long passes, 2.5 through passes per game in all competitions.

Eriksen is a player who likes to make things happen. Apart from creativity, he likes to score goals as well and he is not afraid to take shots from distance either. 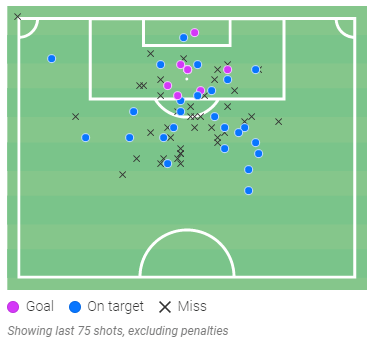 The likes of Xhaka, Elneny, Partey are all very good players with impressive passing skills. But they lack the tools to carve open defences and unlock low blocks.

Arteta will have to invest in a quality playmaker in January who can make a difference in the final third if they want to compete with the Premier League elite and push for a Champions League top-four spot (a title challenge seems out of reach already). Will Eriksen be that player?